Real Estate Borrowers Are Keeping Their Distance From SOFR, for Now

Until they feel that banks are on the same page, some borrowers will stay away from LIBOR's supposed replacement 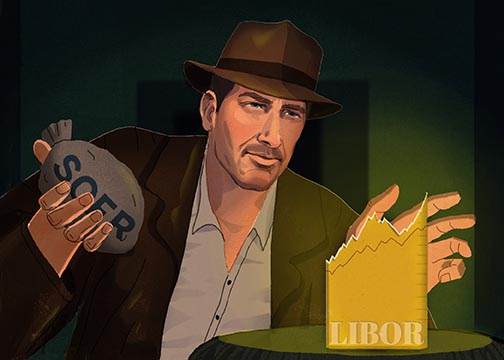 In 2017, the Secured Overnight Financing Rate (SOFR) was picked as the preferred successor to the U.S. Dollar London Interbank Offered Rate (LIBOR), the widely used benchmark reference rate index that’s been around since the 1970s and is scheduled to expire at the end of 2021.

Last summer, the Alternative Reference Rate Committee (ARRC), the entity that was tasked with choosing a new reference rate and settled on SOFR, released fallback language for markets to prepare for the transition. Following the release, major lenders and institutional players moved quickly to begin the shift to SOFR.

Last year, in December alone, there were numerous examples of the conversion. Some major investment banks began implementing ARRC fallback language in all their single-asset, single-borrower (SASB) CMBS securitizations, listing SOFR as the alternative, and on December 12, Freddie Mac issued a CMBS conduit that was all SOFR — the FREMF 2019-KF3 deal. A separate example came a day later on Dec. 13, when Royal Dutch Shell closed on one of the first credit facilities linked to SOFR, a $10 billion revolving credit facility coordinated by Bank of America and Barclays. And earlier this month, the Federal Housing Finance Agency announced that Fannie Mae and Freddie Mac would no longer purchase loans indexed to LIBOR in a move to encourage their approved lenders to adopt a new benchmark to help avoid any cash flow risks.

At the end of 2019, the Commercial Real Estate Finance Council (CREFC) estimated that around $1.3 trillion of commercial real estate debt is indexed to LIBOR, and of that amount, $200 billion is securitized, a majority of which — 53 percent — is agency CMBS, with SASBs following behind at 33 percent. LIBOR touches a much larger share of many other markets, but its phase-out is obviously significant in the real estate world.

For borrowers, there is currently a divide in the market over SOFR’s prospects, mainly around its duration flexibility, its liquidity as it relates to the market for purchasing caps and forward rate locks and spread adjustments to account for the differences between the two indices.

“[SOFR] should be ubiquitous, tradeable, syndicatable and assumable,” said Jake Reiter, the president of real estate investor Verde Capital. “It’s about its usability.”

“For the longest time you had paper in the LIBOR market that was based on risk and duration,” Reiter added. “SOFR is not controversial and it’s less readily manipulated, but how do we create and foster a forward-looking and liquid market for SOFR? It’s a wait-and-see, because you can’t control an underlying index.”

At the CREFC Miami 2020 conference in January, lenders worried that the market isn’t ready for SOFR, or that floating-rate borrowers aren’t as sophisticated on the issue as they should be at this stage. Major lenders also said investors are “laser-focused” on the LIBOR phase out and want the ARRC fallback language included in deals.

“Smart investors saw this [transition] coming for a couple of years now and tried to prepare accordingly,” said Rod Kritsberg, the co-founder and CIO of KPG Funds. “As a borrower, with an interest rate based on LIBOR, plus a spread, the goal in loan negotiations is for the total rate to stay the same when SOFR replaces LIBOR. The concern is that with current LIBOR being so low, coupled with tight spreads, the new SOFR rate and corresponding new spread doesn’t exceed the total interest rate on existing LIBOR loans. Many lenders push back on a negative spread in loan documents. The hope is that lenders take that into account when the changeover comes and work it out with borrowers.”

LIBOR has been considered to be more flexible and forward-looking, because it is calculated every day by asking major international banks what they would charge to lend uncollateralized money to each other. Interbank lending, now, makes up just a small fraction of total banking assets, whereas deposits represent a much larger share of assets than it had in previous decades.

LIBOR’s reputation was tarnished after the global financial crisis, when it was uncovered that major banks were manipulating the numbers. After that, its reliability was questioned, and regulators began exploring alternatives.

“SOFR as an index is important because it’s like a currency,” Reiter said. “It’s been 10 years or more since the meltdown, and there was a lot of abuse around LIBOR. You have to move to an index people feel is mathematically cogent.”

After 2021, almost all of the 35 Interbank Offered Rates (IBORs) will still be published and their continued use is, of course, voluntary. But the international banks that contribute to IBOR will no longer be legally required to do so, making it much more unreliable, so it seems almost inevitable that LIBOR — and other IBORs — will completely drift into the background and SOFR (or other alternatives) will come to the fore.

“Even if LIBOR continues to exist, it likely will become more and more erratic, and it will not continue to be what it is,” said Andreas Wilgen, the group credit officer for global structured finance at Fitch Ratings, adding that litigation and operational risks are some of the biggest concerns and that regulatory pressure has caused implementation of SOFR fallback language to ramp up. “There’s been very little focus on the shortcomings of LIBOR.”

Kritsberg said, “The replacement of LIBOR with SOFR needs to be seamless to avoid chaos in the lending market. The new ‘all in’ SOFR rate, plus applicable spread should mirror the prior ‘all in’ LIBOR rate, including the existing spread, such that total rate following replacement remains unchanged. Ultimately, regardless of the precise language in the loan documents, real estate lenders will have to do the right thing by their borrowers.”

Verde has a mission right now to focus on the use of fixed-rate debt, which keeps it outside the realm of reaching for loans still indexed to LIBOR, but when it comes to gauging how SOFR would work for his shop, he’ll keep his distance.

“The most important thing for us as large consumers of institutional debt — debt funds, agencies and banks — is that we fix everything as a de-risking mechanism,” Reiter said. “We’re focused on the flexibility of debt and fixing our loans. We’re not driving for clarification of something that can’t be clarified; we’ll just avoid the uncertainty. I have to be comfortable there’s going to be liquidity in forward-looking SOFR. Until then, I’ll use the Treasury.”

Reiter added that “in a world where we always look to fix [rates]” that uncertainty is not something with which Verde would like to dabble. “We’re usually 65 to 70 percent levered,” he said. “We want to make sure we don’t lose access to [debt proceeds] and can always fix the rate. But, given the choices, I’d rather lock under Treasuries. Right now, it’s not clear all banks want the same thing.”

Despite the pushes to phase out LIBOR, and the expected tiering effect of smaller shops following suit behind the major players, some banks aren’t on board with SOFR just yet.

In a letter to federal regulators in September 2019 that was obtained and published by Politico, a group of 10 banks, including BBVA, Capital One, Citizens Bank and M&T Bank, highlighted their displeasure with SOFR, saying that it is “not well-suited to be a benchmark for lending products and [we] have concerns that this transition will adversely affect credit availability.”

According to a Kroll Bond Rating Agency report in January that outlined perceived issues with SOFR implementation and the inconsistent approaches currently being deployed by market participants, it wrote that it could envision a scenario “in which market constituents [adopting] different measures to address the cessation of LIBOR could lead to borrowers having poor experiences, which could negatively impact future securitization volumes and potentially lead to litigation. Furthermore, uncertainty across deals could impact investor interest and reduce market liquidity.”

Because of the uncertainty, many borrowers seem to find themselves at a disadvantage as most of the lending sphere, from balance sheet to agency to the securitization world, has moved onward and upward in the phasing out.

A high-ranking official within the debt practice of a major global investment firm told CO they “believe the major players in the market, mainly derivatives players, will be driving the solution.”

Reiter said, “Nobody is relying on SOFR language today, but it will become a cascade. When the largest institutions become more comfortable, it’ll come together in a relatively quick timeframe.”