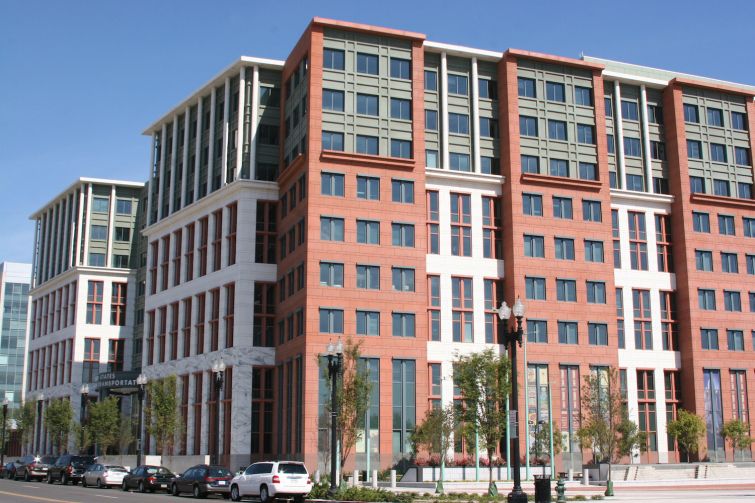 The U.S. Department of Transportation’s headquarters. Photo: Aude for Wikipedia

In a blockbuster deal for Washington, D.C., the General Services Administration has acquired 1200 New Jersey Avenue SE, the 1.5-million-square-foot home of the U.S. Department of Transportation, from JBG Smith for $760 million, according to the GSA.

The GSA exercised a purchase option in its DOT lease, utilizing funding that was appropriated from the president’s 2019 budget, a GSA spokesperson told Commercial Observer. The deal eliminates the lease, which was set to expire in October of 2021, and keeps the DOT in its headquarters.

“The parties negotiated a closing and termination of the lease prior to its original expiration which will provide GSA with approximately $99 million in rent savings,” the GSA spokesperson said.

Last week, Commercial Observer reported that half of the GSA’s 25.5 million square feet of leased spaces in the D.C. area would expire in the next three years, necessitating new deals and a possible strategy shift from leased properties to government-owned facilities.

“The acquisition of this property is in line with GSA’s goal to save taxpayer dollars through lease cost avoidance,” the spokesperson said.

According to the Washington Business Journal, JBG Cos. developed the facility for the GSA in 2006, prior to JBG’s merger with Vornado Realty Trust. JBG was selected by the GSA to develop a property at the site that it would own, operate and manage for an initial lease term of 15 years, according to the JBG website.

“The building was built in 2004 in accordance with the DOT’s requirements,” the GSA spokesperson said. “No physical changes to the building were required to complete the sale. The building was already fully occupied at the time of purchase.”