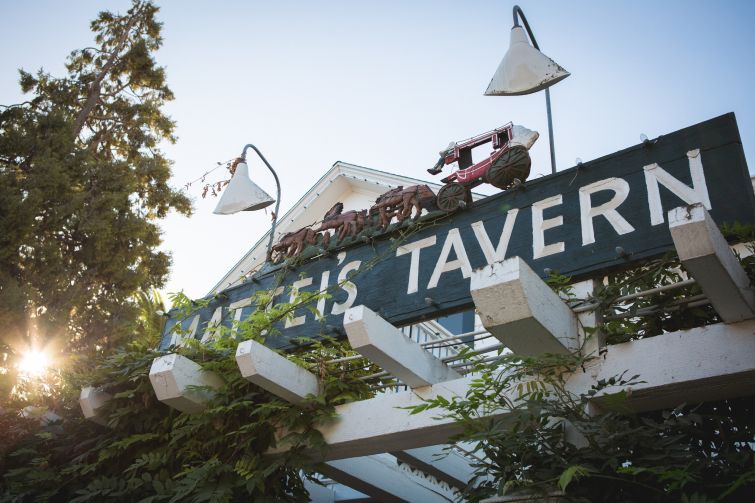 Signage at the front of the original Mattei's Tavern in Los Olivos, Calif. Courtesy: NKF

The developers of a luxury California resort have gotten $32 million in construction debt from Long Beach, Calif.-based Farmers & Merchants Bank to proceed with a plan to remake an old, landmarked tavern inn in California’s Santa Ynez Valley into a destination resort, Commercial Observer has learned.

The construction financing will help owner Brian Strange, an investor and trial attorney based in Los Angeles, and partner Auberge Resorts Collection fund the build out of The Inn at Mattei’s Tavern at 2350 Railway Avenue in Los Olivos, Calif. With the construction work, the asset will be transitioned to an Auberge-branded hospitality venue.

A Newmark Knight Frank team led by Dustin Stolly and Jordan Roeschlaub, who were joined by Nick Scribani and Chris Kramer, sourced and arranged the financing on behalf of the borrower.

The deal closed just last Friday, amid the financial fallout of the COVID-19 outbreak, and a source with knowledge of the deal told CO that Farmers & Merchants Bank “stood up and honored all terms,” commending its deal execution.

“With brand new facilities unrivaled by the limited inventory that exists in the market today, [the property] will be ideally positioned to capture the high-rated group leisure and transient demand, which is not currently satisfied in the Santa Ynez Valley,” Stolly said in a prepared statement.

The property is fully-entitled and shovel ready and is expected to be completed next year, according to information on the property’s website and confirmed by sources. It will mark the area’s first full-service luxury hotel that’s managed by a major global resort operator. It will offer 67 guest rooms and amenities that include a spa, a restaurant, an outdoor bar and event space.

The original property, Mattei’s Tavern, was built in 1866 and received county landmark status in 2010. It has operated as a country roadside tavern and inn, with a dining room and a bar, located on the stretch between Santa Maria and Santa Barbara, Calif. It’s also been utilized as a wedding venue.

“The hotel’s proximity to two of the most prestigious and wealthy destination markets in the United States allows it to attract a broad and affluent base of guests for weekend or extended stays, as well as upscale events, such as weddings and executive getaways,” Roeschlaub said in prepared remarks.

Strange and Auberge struck a deal in late January for the latter to manage the new property, according to a report from local Santa Barbara news site, edhat. He and his wife bought the 6.5-acre Mattei’s Tavern property in August 2017, according to a February report in the Santa Barbara Independent.

Strange is a real estate investor and co-founder and partner of Los Angeles-based law firm Strange & Butler, which focuses on antitrust law, class actions and monetary recoveries for corporations and individuals. His real estate holdings include a vineyard, two hotels and more than 200 multifamily units accumulated since the early 1990s, sources said.

Strange did not immediately respond to an emailed inquiry. A representative for Farmers & Merchants Bank declined to comment on the deal.