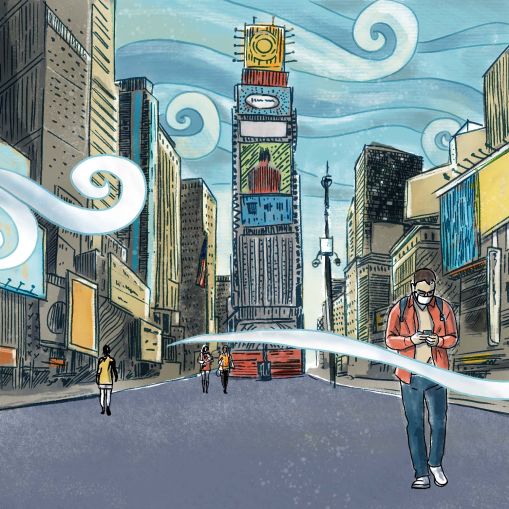 Times Square has become a ghost town as Broadway theaters, retailers and hotels have been forced to shutter, thanks to government restrictions aimed at preventing the spread of coronavirus. Illustration: Matthew Baek/For Commercial Observer

If you check out one of the many webcams pointed on Times Square—one of the most bustling pieces of real estate in the whole world—one gets the sense that you are looking at a ghost town. Maybe two dozen pedestrians walking around, keeping their distance, eyeing each other warily.

The “crossroads of the world”, that five-block-long area along Broadway between West 42nd and West 47th Streets, normally sees about 380,000 pedestrians a day, many of whom are tourists. These days, it’s almost empty.

Over the past week, the city and state have passed a series of unprecedented measures designed to discourage large groups of people from congregating and unknowingly transmitting the virus to one another. The measures, while necessary to contain New York City’s fast-growing viral outbreak, will likely devastate its economy in the short-term. City Comptroller Scott Stringer estimates that the city will lose $3.2 billion in tax revenue over the next six months, as thousands of businesses close and New Yorkers hole up in their apartments indefinitely to reduce contact with other people. He called for the city to identify up to $1.4 billion in spending cuts to set aside for economic assistance programs for businesses and property owners impacted by the novel coronavirus.

It has been eight days since Gov. Andrew Cuomo shut down the Broadway theaters, leaving thousands of actors, production staff and support workers wondering if they’ll have jobs in a few months. The theaters and shows will likely lose roughly $30 to $40 million in ticket revenue per week, according to gross ticket sale data reported last year by the Broadway League.

The majority of retailers have closed as the governor has ordered all “nonessential workers” to stay home. Macy’s, Bloomingdale’s, Saks Fifth Avenue, Bergdorf Goodman, Neiman Marcus and Nordstrom have all temporarily shuttered their Manhattan flagships. A slew of major national chains, including Ralph Lauren, Ulta, Victoria’s Secret, Fossil, Canada Goose, Nike, Apple, Abercrombie & Fitch, J. Crew and Lululemon, have opted to close all of their U.S. stores, including those in New York. And the state has shut down casinos, gyms, theaters, shopping malls and bowling alleys in an effort to curb the spread of coronavirus.

Bars and restaurants were forced to cut their seating capacity in half last week, and by Tuesday, they were required to convert to take-out or delivery-only. Both independent restaurants and large restaurant groups have been laying off overwhelming numbers of staff. Danny Meyer’s Union Square Hospitality Group laid off 2,000 workers, who made up 80 percent of its workforce, on Wednesday, citing a “near complete elimination of revenue” at its 18 New York City restaurants. Jean-Georges Vongerichten, who has 15 restaurants in the city, and Major Food Group, which has seven restaurants, have begun letting staff go. Tom Colicchio’s Crafted Hospitality has laid off 300 workers. Even street food vendors are starting to close up shop, with foot traffic throughout the city slowing to a crawl as most New Yorkers stay home. Airport dining operator OTG also abruptly laid off more than 1,000 of its concession workers at John F. Kennedy, LaGuardia and Newark Airports, according to Gothamist.

While the Times Square Alliance couldn’t furnish data on the devastating tourist slow down in Times Square this week, foot traffic analysis firm Placer.ai released recent estimates for other major tourist attractions in Midtown. For the first week of March, visits to the Empire State Building were down 43.7 percent below average, and on March 13, visits had plunged to 58 percent below the daily average. Similarly, visits to Rockefeller Center were down 70 percent year-over-year on March 13.

Hotels, much like their retail brethren, have been hit incredibly hard by coronavirus. On March 11, President Trump introduced a 30-day travel ban for foreign nationals who have traveled from anywhere in Europe, the United Kingdom or Ireland 14 days before their arrival. He had already prohibited travel from Iran and China, and he recently announced that the U.S. and Canada had decided to close their border to “non-essential travelers” like tourists.

The drop in tourism, combined with other restrictions from the city and state, has been a death knell for the hospitality industry in the Big Apple.

“This means that over half of the rooms in New York City were empty last week,” said STR analyst Jan Freitag. “We truly expect that this data will get worse before it gets better. The performance data is very, very dire.”

Vijay Dandapani, the CEO and president of the Hotel Association of New York City, said many hotels in the city reported occupancy numbers in the single digits this week. He expects STR’s next batch of weekly data to show a 75 percent drop, because it will reflect the impact of Trump’s newly enacted travel bans and the many restrictions in place in New York City.

“There’s no point in keeping a hotel open with only two or three rooms sold in a night,” he explained, referring to rock-bottom booking numbers reported by hotels on Wednesday night. During this time of year, prime Manhattan hotels typically rent out about 85 percent of their rooms, he said.

Dandapani thinks that as many as 80 percent of the city’s 55,000 hotel workers could be laid off due to the pandemic. The New York Hotel and Trades Council, the city’s powerful hotel trade union, reported earlier this week that 20,000 of its 35,000 members had been laid off. Hilton Hotels decided to close the city’s largest hotel, the 1,878-room New York Hilton Midtown, starting Friday. It employs 1,386 unionized workers, according to Crain’s New York Business.

Several local politicians, including City Council Speaker Corey Johnson and City Comptroller Scott Stringer, have called for deferring sales and business taxes to relieve the massive drop in income that businesses are suffering during the pandemic. Dandapani argued that the city needs to go even further and defer property taxes for hotels, because they’ll be paying taxes based on income reported last year when they were flush.

“Not a single hotel is going to be having the cash flow to pay that bill on July 1,” said the hotel trade exec. “If the hotels close down because they can’t pay this, some of them will never come back. And a hotel that is no longer able to function obviously affects a lot of employees.”

And despite the governor’s efforts to provide relief for workers affected by coronavirus, tens of thousands of New Yorkers will suddenly be heading into unemployment and months of uncertainty. So many workers were trying to contact the state unemployment insurance board this week that the agency’s website kept crashing and its phone lines were down, said Julia Rosner, an employment attorney at nonprofit Manhattan Legal Services.

“I’m told you have to call on certain days based on the initials of your first and last names,” said Rosner.

And because New York hasn’t really digitized its system for unemployment insurance cases, the state Department of Labor will have an even harder time processing applications and appeals from workers who get denied insurance while its physical offices and hearing rooms are closed for the next two weeks, Rosner argued.

And many workers applying now will be contractors and members of the gig economy, like delivery workers, taxi drivers, and Uber and Lyft drivers. Typically contractors are denied unemployment insurance when they first apply, because workers have to prove that they were employees in order to receive unemployment payments. Uber drivers, for example, often win unemployment benefits on appeal, after being initially denied, Rosner explained. But with the state holding unemployment hearings over the phone instead of in-person, the gears of the appeals system will likely move much more slowly.

The attorney also pointed out that the governor’s new paid COVID-19 sick-leave benefit legislation was in fact very narrowly written. It only applies to workers who are in isolation under “a mandatory or precautionary quarantine order” issued by the state or city board of health. That would require both testing positive and getting an official order from the local health board. In a chaotic moment when New Yorkers are struggling to get tested and typically being told to isolate by their employer or their doctor, it’s unclear how many people would qualify for the coronavirus paid sick leave benefits.

However, the federal coronavirus relief package that the president signed into law on Wednesday does help bridge the gap by offering two weeks of paid sick leave for those who are ill with the virus, quarantined, seeking a diagnosis or preventative care or caring for sick family members. The legislation also offers 12 weeks of partially paid leave to parents caring for children whose schools have closed.

Still, Rosner argued that people in high-risk groups should be covered by the state quarantine leave even if they don’t get sick.

“People with compromised immune systems or that are elderly, if they don’t want to work because they’re at greater risk of severe illness, it’s probably going to be more difficult for them to access these programs,” she said. “They may be called to work because they’re in industries that are indispensable. They may have to jump through more hoops to stay home from work, like getting a letter from their doctor, and the Department of Labor may want proof. We would love to see workers that are medically fragile or over 65 fall under that official order and [be able to] self-quarantine.”