Why real estate royalty Brian Steinwurtzel set GFP on a mini spree in Fidi and beyond. 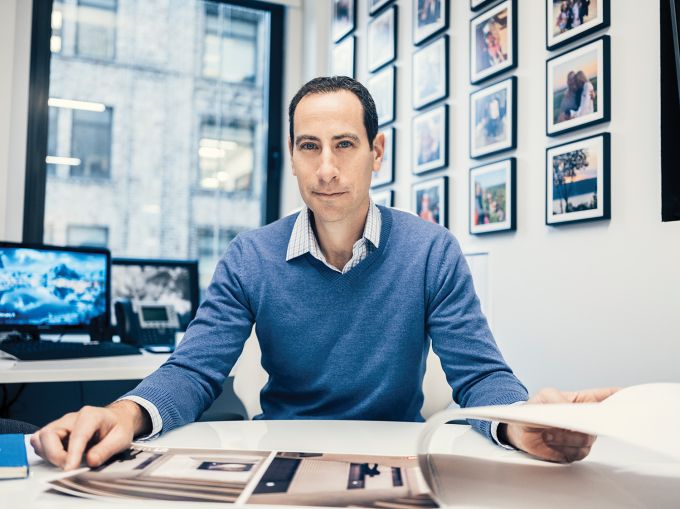 Real estate might be in Brian Steinwurtzel’s blood — as a member of the legendary Gural family (he’s Aaron Gural’s grandson and Jeff Gural’s nephew) — but it wasn’t always his first career choice.

The 42-year-old is now the co-CEO at GFP Real Estate, one of the most rapidly expanding landlords in the city, with a portfolio stretching into the millions of square feet. But he remembered growing up in the 1990s during the real estate crash, surrounded by his family’s worries about survival and not foreclosing on any of their properties.

“There’s a saying that was like, ‘Stay alive to ‘95,’ ” Steinwurtzel said. “We did well, but my memories of … the real estate business was it was all bad. A lot of fighting, not knowing what’s going to happen.”

So, after being blown away when he started to use a computer with Windows 95 instead of a word processor in college, Steinwurtzel decided to get into the burgeoning technology field instead.

After graduating from Washington University with a finance degree, Steinwurtzel served a spell as a consultant at PriceWaterhouseCoopers integrating technology into the company, but he left after he realized his work was putting others in the firm out of a job. Then he almost wound up at Enron in Houston before taking a position at a fintech startup.

Nearly a year later the company was sold, right in the midst of the dot-com bust, and Steinwurtzel applied to Columbia Business School to wait out the recession. He had a few months before the Columbia program started so he approached his uncle, Jeff Gural, for a job in the meantime.

“He put me on a building in Times Square as an asset manager and it was just a great experience,” Steinwurtzel said. “I kind of fell in love with the industry.”

Steinwurtzel decided to focus on real estate at Columbia and when he graduated he went back to his uncle, who was then the chairman of Newmark Knight Frank, for a job. But even with the family ties, Steinwurtzel still faced a tough salary negotiation.

“I came back to my uncle and said, ‘I’d like to keep working, what do you think?’ ” Steinwurtzel said. “He says, ‘How much money do they pay people like you?’ And I told him and he says, ‘We don’t pay people like that.’ ”

Despite the moderate salary, Steinwurtzel stuck with it. He served as a managing director at NKF for 15 years until the family spun off their portfolio into a new company, GFP Real Estate, in 2017. Steinwurtzel became the co-CEO of the new company, along with his cousin Eric Gural, and the pair now manage the family’s nearly 16 million square feet around the city, which includes 40 Exchange Place, the Actors’ Equity Building at 1560 Broadway and the Flatiron Building.

“He is probably one of the most responsible and fair-minded landlords,” Podell said. “He looks at the whole deal — not simply the rent. He’s responsive and direct.”

And instead of just maintaining the family portfolio as-is, Steinwurtzel set off on a mission of acquiring older buildings around the city or taking existing ones in its portfolio and completely revitalizing the asset, something he told business partners nearly a decade ago he wanted to do.

“He transformed how the Gurals traditionally have done business,” said Lori Buchbinder, a principal at the family-run real estate brokerage and management company Buchbinder & Warren, which has worked with the Gurals for years. “When we were thinking about developing a building he told me, ‘I really want to do that.’ ”

“He then had a goal of looking at buildings and transforming them,” Buchbinder added. “Being creative, trying to reposition the properties and taking on a very long and important role in his family, it wasn’t like business as usual.”

Since then, Steinwurtzel and GFP have embarked on several such projects — including transforming the former film storage facility at 630 Ninth Avenue, which the family has owned since the 1970s, into a Class B office — and even have case studies on its website with before and after pictures Steinwurtzel is excited to show off.

Since 630 Ninth Avenue served to store flammable nitrate film in it, one side of the building had no windows and shafts for each film vault that went up into the roof to let smoke out in the case of a fire. GFP knocked down the walls to the vaults to create bigger floor plates for office users and installed windows on that side of the building, all while keeping touches of the building’s history alive in the hallways.

Last year, GFP went on a buying spree, picking up four projects around the city: 301 First Avenue, which it plans to renovate into student housing; 675 Avenue of the Americas; 7 Hanover Square; and 45-18 Court Square in Long Island City, Queens, where it plans to build a life sciences complex.

“When Eric and I took over the day-to-day, part of the mandate was to grow the portfolio,” Steinwurtzel said. “Some years we bought absolutely nothing, and then other years — like last year — we bought four new deals. We’re very picky, we have a great team that we try to listen to, and we’re not under any pressure to buy anything. What we do buy, we’re putting our name on, and that’s important to us.”

The current redevelopment on Steinwurtzel’s mind is the transformation of the 970,000-square-foot 7 Hanover Square, which GFP plans to split into 50 Water Street and 100 Pearl Street, in the Financial District. GFP partnered with Northwind and went into contract to buy the 27-story building for $308.5 million in early 2018.

Guardian Life Insurance — the building’s largest tenant — had an option to purchase the property, but moved its headquarters to 10 Hudson Yards last year. GFP and Northwind restructured the deal to buy-out Guardian’s option with a total capitalization of $620 million, with $190 million in equity.

“There was risk associated with it because we had to sign a contract almost two years before closing,” Steinwurtzel said. “It was a risk that some others might not want to take, but we believed in the neighborhood, we believe in the city to really take that risk. We think that Downtown — especially on the east side — is undergoing a renaissance.”

The lower portion of the building will be known as 50 Water Street and GFP already inked a deal with NYC Health + Hospitals for the entire 526,552 square feet there. The developers also nabbed a $430 million construction loan from Square Mile Capital in October 2019 to start a major renovation to the entire property.

Plans call for a new lobby and to enclose more than half of the covered walkways in front of the buildings — known as arcades — in glass. The arcades will have public seating and space for retailers and dining options, including a food hall.

“It’s going to be a fantastic positive change for us and for Water Street,” said Jessica Lappin, the president of the Downtown Alliance (Steinwurtzel sits on the organization’s board). “It’s going to look better and going to function better and is bringing amenities that are much needed. They’ve been thoughtful in how to design it and how to interact with the community.”

Steinwurtzel said his team was attracted to 100 Pearl Street because of the number of new residents who have moved into the neighborhood in recent years. The building aims to provide them with some much-needed amenities.

“[The buildings] become better neighbors for people because there are places to go; there are more dining options,” he said. “It just becomes a lot nicer.”

And Lappin said good neighbors are becoming harder to find as more Downtown buildings are owned by bigger companies with fewer ties to New York City.

“It’s harder, as time goes by, to find people who really do have that attachment and the need to really feel engaged,” she said. “Buildings are owned by REITs and pension funds, they’re not owned by people who have that personal connection. It really is wonderful to have somebody that is from a family that has tradition and is being engaged.”

Stepping into GFP and Steinwurtzel’s office, it’s clear that family plays an important role in the company. The roots of GFP took ground in 1952 when Steinwurtzel’s grandfather, Aaron Gural, bought what was then called Newmark & Company. In 1978, his son Jeff Gural took over the company with Barry Gosin and started an aggressive acquisition spree around the city which included picking up 520 Eighth Avenue and 630 Ninth Avenue.

Newmark eventually formed a partnership with London-based brokerage Knight Frank in 2006 and became known as Newmark Knight Frank. The Gural family split from the brokerage side of NKF about three years ago to solely focus on its portfolio and became GFP (Gural Family & Partners).

Photos of the elder Gurals dot the walls of GFP’s Midtown offices along with historic pictures of its properties. And in Steinwurtzel’s office, nearly every free space of one of his walls is lined with photos of his family, including plenty of his wife and two daughters; Mia, 11, and Ayla, 7.

What makes him such a great role model, Buchbinder said, is his dedication to the city and philanthropy. Aside from his board membership for the Downtown Alliance, Steinwurtzel is chair of the Soho Broadway Initiative Business Improvement District and a Trustee for Cooper Union.

But it’s his work with nonprofits Steinwurtzel seems most proud of. Steinwurtzel is a Trustee for the Center for Family Representation — which provides free legal representation to try to keep children with their parents — and Selfhelp, which offers services to seniors across the city. GFP also has a third of its office portfolio dedicated to nonprofit tenants and offers them discounted rent or contributions, sometimes both, during lease negotiations.

“The lease negotiation was about ‘How do we help you do your work?’ ” Lauren Letta, COO of Charity Water, which is a tenant at GFP’s 40 Worth Street, told Commercial Observer in 2018. “They always stay so true to their promises. When we found this great space, they helped us figure out a rent that made sense.”

Steinwurtzel said helping nonprofits has always been a priority for the Gural family, and they took it one step further in 2018 by adding a ticker to their website that showed how much the owner donates to nonprofits each year. So far for 2020, the number is about $2.5 million.

“We want people to know that they should be giving back also; it’s important,” Steinwurtzel said. “We think that makes not only our buildings better, that makes the city better, it makes the community better. By doing that, we’re helping to improve ourselves as well.”