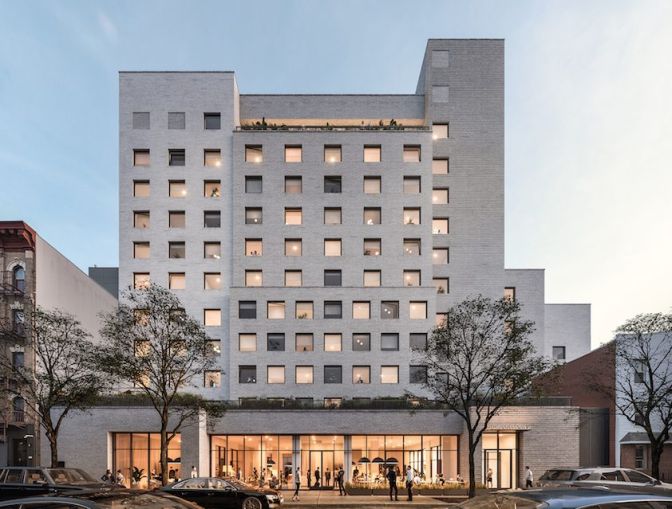 A rendering of 292 North 8th Street. Rendering: The Collective

The Collective has landed a $75 million construction loan for its latest co-living development at 292 North 8th Street in Williamsburg, Brooklyn, Commercial Observer has learned.

ACRES Capital provided the financing in a direct deal.

The property — The Collective’s third Brooklyn project — is an 11-story student housing and short- and medium-stay co-living building. It is being developed in partnership with local universities and is set to comprise 194 beds for students plus a 127-bed co-living portion geared toward nightly and monthly stays.

Building amenities are set to include a student lounge, classroom spaces, a rooftop fitness and wellness level with a sun terrace and sauna, a restaurant and a courtyard bar. The property will host a program of seminars, lectures and think tanks, and the general public is welcome to access both the space and its programs.

“North 8th is the first of its kind. We will deliver the best amenities and community-driven programming to students and members alike.  We’re looking forward to getting started and welcoming our newest neighbors,” Simon Koster, The Collective’s Head of U.S. Development, said in prepared remarks. “ACRES Capital is a key partner for our U.S. growth.”

“For our firm, this is an opportunity to invest with an inspirational client on what will be a transformative project,” Mark Fogel, President and CEO of ACRES Capital, said. “We believe that co-living is a future-forward alternative to housing, and given these factors, it was a very attractive proposition for us as lenders.”

The Collective — founded by Reza Merchant in 2010 — opened its New York City offices in 2018 and its first location in the U.S. at the former Paper Factory Hotel in Long Island City, Queens, in October 2019. Last week, the company announced it would move its New York City offices to the penthouse of the Soho Building, as reported by CO. It currently has more than 9,000 units it either operates or is developing across the globe, with a 100,000-unit global portfolio goal to achieve over the next five to 10 years.

In terms of ground-up developments, North 8th joins 555 Broadway in Williamsburg and 1215 Fulton Street in Bed-Stuy, Brooklyn. The London-based firm also has 2825 NW Second Avenue in Miami and 633 South LaSalle Street in Chicago currently under construction.

Last month, Deutsche Bank and GCP Asset Backed Income Fund provided a $179 million financing package to fund The Collective’s continued global expansion, bringing its capital raised to more than $1.25 billion. The Collective will use the new financing package to acquire additional development sites, with a particular focus on the U.K., Germany, Ireland and the U.S., as it continues to expand globally. More broadly, its capital raised will fund new acquisitions and delivery of its current development pipeline.