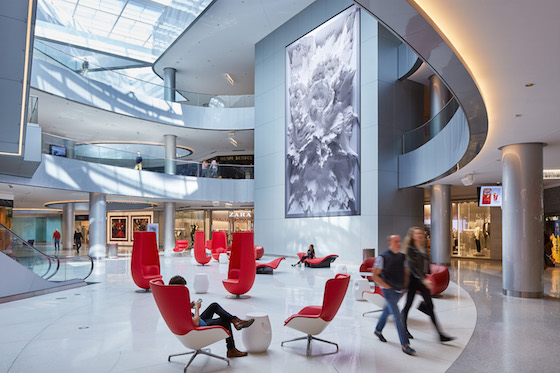 As the biggest retail deal of the last 12 months marches towards completion, Simon Property Group’s planned acquisition of Taubman Centers is promising to make the ownership of the country’s top malls an even more exclusive club.

For years, analysts have tracked a class divide among retail landlords as the sector battles the rising tide of online sales. Owners of outdated, outlying shopping centers have struggled with falling rents, empty stores and tenant bankruptcies even as the country’s highest-quality properties have still managed to draw in shoppers who are ready to spend.

Now, the top tier of mall owners is about to become cozier. Simon’s plan to buy a majority stake in Taubman will give Simon control over an even larger share of America’s best retail assets, further culling the roster of firms poised to benefit from retail’s remaining areas of strength.

From its $3.6 billion acquisition of Taubman, Simon “gets positive accretion, and an increase in the overall quality of its portfolio,” said Kevin Brown, a Morningstar analyst who studies real estate investment trusts. And a higher-quality portfolio, in his view, is the top prize in an increasingly bifurcated retail landscape.

“Really, what you want going forward is to own some of the top 100 malls in America,” Brown said. “Tubman’s portfolio gives Simon, on average, a top-100 mall: really premium assets.”

Brown casually estimated that Simon now owns about a third of the country’s most attractive shopping centers, a share that could improve to 40 percent or 50 percent following an integration with Taubman. Only two other big owners, Brookfield and Macerich, would share any significant slice of that pie with Simon after the deal.

Simon’s biggest treasures in the acquisition would include Taubman’s The Mall at Short Hills in northern New Jersey, Beverly Center in Los Angeles, Cherry Creek Shopping Center in Denver and Waterside Shops in Naples, Fla.

Each plays host to a hearty mix of luxury brands and mid-market apparel stores, a blend that’s given Taubman the industry’s highest benchmark sales figure. Last year, sales at Taubman malls were $876 per square foot, a nearly 10 percent increase over 2018 figures. Simon, for its part, reported sales per square foot of $693 last year — a 5 percent jump over 2018.

The deal, which would involve Simon’s purchase of 80 percent of Taubman’s shares, won’t be final until shareholders vote their approval later this year. But the Taubman family, which owns just under a third of the shares, has pledged its support, as has Taubman’s board of directors. Assuming the sale proceeds, it will be a rapid benefit to Simon’s bottom line, according to Newmark Knight Frank Vice Chairman Thomas Dobrowski.

“If you’re Simon, the ability to acquire that type of pool and immediately add to your portfolio and sales activity is great,” Dobrowski said. “And the Taubman malls will do that.”

It also can’t hurt that Simon has seemingly managed to avoid overpaying. According to Morningstar’s math, the ratio of Taubman’s net operating income to its sale price — a measure called the cap rate — is 6.2 percent. Morningstar said it would have expected Taubman’s high-quality malls to sell for more of a premium; in other words, a lower cap rate, closer to 5 percent.

Analysts expect the deal to boost Simon’s cash flow from real estate by 3 percent to 4 percent per year in the short term.

But despite the strong cap rate, the deal still closed at a significant premium to Taubman’s market value. On Feb. 3, the day before Bloomberg first reported that Simon and Taubman had begun to discuss a merger, Taubman shares closed trading on the New York Stock Exchange at $28.25. Simon agreed to pay $52.50 per share, an 86 percent premium over that level.

Another simultaneous acquisition on Simon’s part could help the Taubman purchase make even more sense for the Indianapolis-based REIT. Last week, Simon teamed up with Brookfield Property Partners and Authentic Brands to buy Forever 21, a privately owned national apparel chain that filed for bankruptcy protection in September.

No big mall owner depends more heavily on rent from Forever 21 than Taubman, according to Jim Sullivan, an analyst at BTIG. The store has been one of Taubman’s biggest tenants, representing about 4 percent of Taubman malls’ gross leasable area. For the next closest landlord, that figure is between 2 percent and 3 percent. So, as an owner in both companies, Simon will be able to retain a bit more control over the destiny of its rent roll, especially as Forever 21 proceeds with a plan first announced last year to close 200 stores.

Still, it’d be a mistake to assume that Simon had been overly concerned about the retailer’s future, Sullivan said.

“As a matter of fact, Simon’s occupancy has been pretty stable, in spite of the challenges of retailers closing stores,” Sullivan said. “They haven’t had a problem replacing tenants.”

On the other hand, investors’ worries about Taubman’s exposure to Forever 21 may well have helped push the mall owner’s value down to a level that made Simon’s purchase feasible.

“In the third quarter [of 2019], Taubman and Simon share prices were trading similarly,” Sullivan observed. “But after Sept. 1, Taubman traded down. We talked to people who liked these stocks and people who didn’t, and we think that the short interest was probably a result of Forever 21.”

Those concerns have since allowed Simon to lock in attractive pricing for both mergers. The Forever 21 purchase in particular is a low-risk outlay with potentially high rewards, Sullivan said.

As a model, he pointed to the 2016 acquisition of Aeropostale by Simon and General Growth Partners — now a part of Brookfield. Between 2010 and 2015, the company’s sales had fallen about 40 percent and its footprint shrank to 229 stores from 800 as teenagers, its prime demographic, seemed to shed their attachment to the brand.

At the time, Simon “explained that they’d made that investment because they were confident that Aeropostale’s problems were fixable,” Sullivan said.

The mall owner turned out to be right. Simon chipped in about $25 million to the $243 million Aeropostale acquisition and has already earned back about $13 million. Aeropostale has grown in value about 44 percent since then, according to Simon.

But another analyst, James Shanahan of financial advisory firm Edward Jones, took a dimmer view of the deal, fretting that the temptation to shore up faltering retailers could be a slippery slope.

“What if H&M slows down next? Would they buy a major stake in them, too?” he said. “You start to wonder. You’re acquiring troubled competitors and tenants, but where does it stop?”

Shanahan also questioned the wisdom of the Taubman acquisition, suggesting that Simon’s cash would be better spent adding international diversity.

“Looking at how overstored the market is in North America, we would have preferred they acquire international assets than this stock,” Shanahan said.

At the moment, Simon’s presence abroad is limited to its premium outlets business: It runs 35 off-price retail centers around the world, including sites in Europe, Canada and Mexico, Japan, China and elsewhere in Southeast Asia. The Taubman acquisition will give Simon just a bit of exposure to full-price malls overseas: The company runs two malls in China, in the cities of Xi’an and Zhengzhou. It also has a shopping center in Hanam, South Korea, and is developing a second South Korean property in Anseong City.

“That’s an interesting toehold in Asia that could be complementary to future growth,” Sullivan said.

Lenders will have an eye on the merger, too. At a time when finding debt for refinancings has been a growing challenge at some struggling American properties, Simon’s move will likely boost its appeal for fixed-income investors, according to Brown.

“Size and scale makes it less likely they’d run into issues from any one of their properties,” Brown said. “It gives them a higher growth profile as well, and from both those perspectives, long term, this should improve their outlook for any sort of lenders.”

With additional reporting by Greg Cornfield.