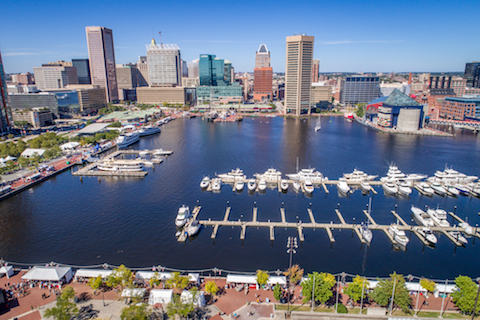 The deal on the asset, which was built last year and is the tallest residential property in the state, closed on Feb. 5. MetLife’s Derrick Smith originated the debt.

Questar broke ground on the two-acre development in March 2016, according to previous reports. It’s located on the former site of a McCormick & Co. spice factory, and as a tribute to its former glory, its new units are named after a variety of spices, like cardamom and sesame.

Melissa Butler, a director within the real estate debt strategies group at MetLife, told CO in a statement that the life company is looking forward to doing more business in Baltimore and “believes that 414 Light Street is one of the premier multifamily assets in [the city], given its location on the Inner Harbor and the quality of the improvements.”

Its location at 414 Light Street — between East Conway and East Barre Streets — puts it within short walking distance to access points for Baltimore metro transit and Maryland light rail stations.

The $170 million high-rise features 394 market-rate residences, 469 above-grade parking spots and just over 12,000 square feet of ground floor retail, which partly has been filled with two vegan restaurant concepts — Plant Food + Wine and Double Zero in 4,500 square feet — spawned from a partnership Questar struck with vegan chef Matthew Kenney. There’s also a Ramen Utsuke, which specializes in ramen dishes and rice bowls located in a portion of the building’s retail space.

The tower offers studio, one- and two-bedroom apartments for rent. Monthly rents for the one-bedrooms start at around $1,940, while the two-bedrooms range from nearly $3,000 to around $4,800, according to listings on Apartments.com. Rents for the property’s studio units start at around $2,000 for 520-square-foot spaces, according to information listed on buzzbuzzhome.com.

The amenity-rich property features 40,000 square feet of indoor and outdoor recreational space, with a one-acre “amenity floor” on the seventh floor. The offerings include a pool — with a large, 16-foot theater screen overlooking it — and a sun deck, with lounging areas and cabanas that offer views of the Downtown Baltimore skyline, according to the property’s website. There’s also an elevated private park with rows of community and resident garden plots. Other amenities include a game room, a salon and theatre for residents, a resident lounge with a fireplace and a book collection, a business lounge and boardroom, a fitness center and a yoga studio and a pet spa. The building also has an al fresco kitchen with dining areas and an outdoor bar.

Representatives for Questar and MetLife were not able to provide a comment or additional information before publication.

This story has been updated to include comments from Melissa Butler at MetLife.