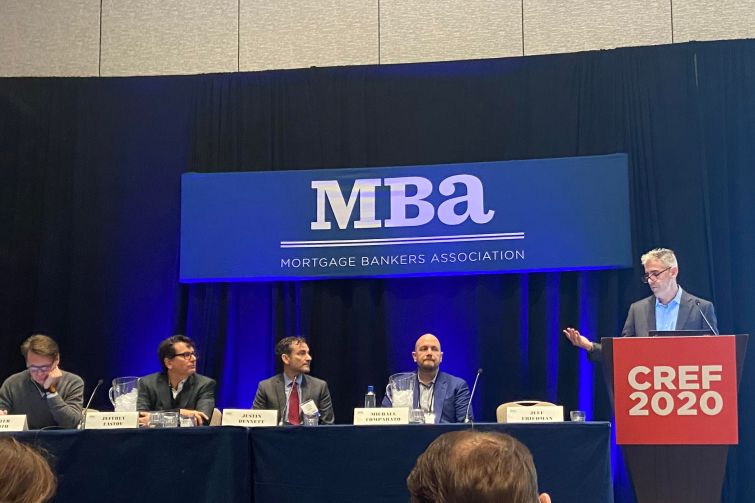 The “Creative Capital” panel at MBA CREF in San Diego was a lively one, moderated by Mesa West Capital co-founder Jeff Friedman.

The panel’s title implied a discussion between “a bunch of smart lenders trying to give you capital. But I couldn’t get those guys, so you’ll have to deal with knuckleheads instead,” Friedman said jokingly about the illustrious group of panelists.

Hindsight is 20/20 and Friedman kicked things off by asking the group what surprised them about the debt markets in 2019.

“I thought the downturn would have gathered steam by now, I’ve been predicting it for years,” Jeff Fastov, a managing principal at Square Mile Capital Management, said.  “I also thought that rates would be higher.”

Justin Dennett, chief investment officer of Morrison Street Capital, said he also was surprised by the continued economic expansion: “We’re anxious to see things cool off at this stage.”

For Michael Comparato, head of Commercial Real Estate at Benefit Street Partners, the CLO space is what left him scratching his head.

“It has completely commoditized the bridge lending space and allowed people who shouldn’t be writing bridge loans to be writing a lot of them,” he said, adding that the allure of CRE CLOs has attracted new entrants to the lending niche by the busload. “We’ll pass on a loan and then see that loan in a CLO six months later, made by a lender we’ve never even heard of.”

He went on to say that the CLO space is “not healthy overall in my opinion, and the prime reason spreads are compressing. “It’s artificially inflating the market. Anyone can issue CLOs and we’ve seen some legitimately awful credits.”

Friedman asked for more info on said awful credits. While Comparato didn’t name names, he described a loan on a GSA building in a top 10 market that Benefit Street had passed on. A lease at the property was expiring in 18 months and the borrower was seeking 90 percent in financing (“What happens if the tenant doesn’t renew?” Comparato said). Another lender happily took this loan on. Adding fuel to the fire, the value of the property had an estimated value of between $30 to $40 per square foot, but this unnamed lender valued it at $175 per square foot (cue gasps from a scandalized audience).

Stress in the system was addressed head-on, with panelists speaking candidly about the deals they passed on and those that went sour.

Fastov said Square Mile recently passed on a construction deal because “everything was pro-rata,” with the equity, senior and mezz providers all funding at the same time. “That’s [a trend] that could definitely come home to roost,” Fastov said, but as Peter Smith, head of originations at TPG Real Estate Finance Trust noted, it’s also a consequence of the heightened pressure to deploy capital as fast as possible in today’s market.

Smith said he’s seen an uptick in secondary note sales — primarily where business plans haven’t been achieved by the borrowers. In a not-too-dissimilar situation to that described by Friedman, Smith said that TPG sold a loan last year, at par, after a borrower wasn’t responding.

“It was sold to someone who wants to own that property,” he explained. “There’s just so much liquidity to take out loans right now.”

Comparato said he hasn’t seen a ton of stress but “it’s probably coming in the next few years. There are just too many ridiculous [lending] stories out there.”