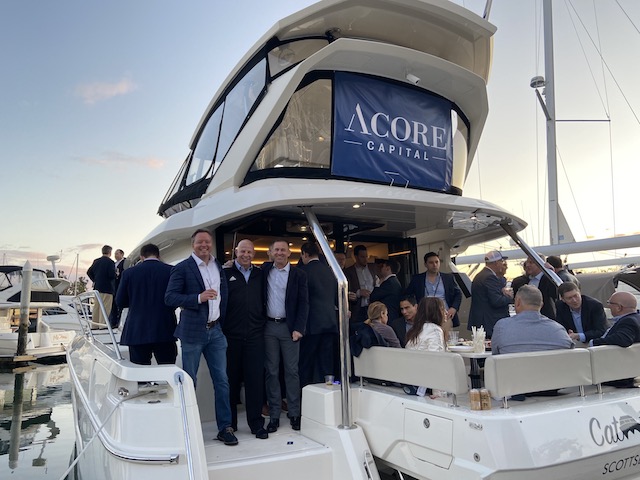 “This conference has never been about the sessions. The real action happens off stage,” said MBA Chairman Brian Stoffers. And the roughly 3,000 conference attendees certainly made the best use of their time at MBA CREF, networking in every nook and cranny at the Manchester Grand Hyatt San Diego.

The conference had a few prevalent themes this year, repeated by attendees CO spoke with, and by panelists.

“The swimming lanes don’t exist anymore,” Greg Reimers, managing director and Northeast Market Manager at J.P. Morgan Chase, said on the construction lending panel. Reimers was referring to the fact that the product lenders have typically been associated with is now just one of many they offer, with life cos, debt funds and banks regularly crossing into one another’s turf in the search for yield.

CRE CLOs: love ‘em or hate ‘em, the market is on fire and that heat is only going to continue in 2020. Borrowers are enjoying the flexibility they offer, while the structures are satisfying investor demand for floating-rate paper. Simply put, CRE CLOs are filling a gap in the market that banks and securitized lenders can’t fill.

But don’t call it a bubble.

“It’s not a bubble,” Stefanos Arethas, head of CRE origination at Credit Suisse, said during the “To securitize or not to securitize” panel. “It’s moving capital around to more efficient parts of the market.”

Then, there’s distress. Sure, market fundamentals are strong but attendees were quick to note some fraying around the edges in the form of note sales, lax loan covenants and inexperienced lenders playing where they shouldn’t and mispricing risk.

And those lenders who tout certainty of execution in their sales pitch had better put their money where their mouth is. With an abundance of capital competing for deals, if Lender A steps away from a deal then Lenders B, C and D (through Z) will step right up to close that deal. But Lender A will be punished in the marketplace for that false commitment, attendees said.

Of course, the certainty of execution also comes through owning more of the loan post-closing, said Bobby Geary, a managing director at 3650 REIT. “Eating your own cooking is paramount in maintaining transaction volume,” he said.

It’s not every day that a celebrity graces an industry event, but attendees received a double treat in the form of Hall of Fame baseball player Dave Winfield, who gave a talk on Sunday, and Alex Rodriguez who was interviewed in front of a packed crowd on Monday.

Rodriguez may have had a 22-year career that included 696 home runs, but it was his first MBA CREF conference. The baseball superstar was interviewed by Stoffers, and answered questions about his sports career as well as his company A-ROD Corp.

Founded in 2003, today A-ROD Corp. invests in real estate, media and sports and wellness, with offices in Los Angeles and Miami. Now that real estate is one of his key focuses, Rodriguez said that he misses the camaraderie in the clubhouse.

“Nothing will duplicate wearing those pinstripes or playing in front of crowds of 50,000 people,” he said. (Surely the MBA conference is a close second, however?)

Rodriguez said he started A-ROD Corp. “out of fear”, seeing as the average baseball career is only 5.5 years, players make 90 percent of their money between the ages of 20 and 30 and fewer than 5 percent of those players have a college degree. His interest in real estate stems back to his childhood, he said and he made his first real estate investment at age 20.

Although the similarities between baseball and real estate may not be immediately obvious, Rodriguez used sports analogies to describe his approach to real estate investment and said he treats his home runs and strikeouts the same way. “I have a Ph.D. in failure and an MBA in getting back up again,” he said. He even quoted his fiancée Jennifer Lopez, saying that one of her mantras is “No is one step closer to yes.”

CO ran into a MBA board member after the interview who told us that around 20 people had the opportunity to meet A-Rod and shake his hand prior to the interview. Surely there were a few photos taken too? “Oh yes, I got a selfie,” the excited attendee said.

After the panel sessions wrapped on Monday, it was party time. Firms including ACORE Capital, Natixis, Citigroup, Walker & Dunlop, UBS and Partners Real Estate hosted shindigs that lasted into the wee hours (is it a coincidence that the Tuesday panels start 30 minutes later than the opening day? CO thinks not).

ACORE kicked things off at 4 p.m. and hosted their party on a boat docked in the marina outside of the hotel, with attendees jumping on board to be part of the action and seemingly reluctant to disembark the vessel as the sun went down.