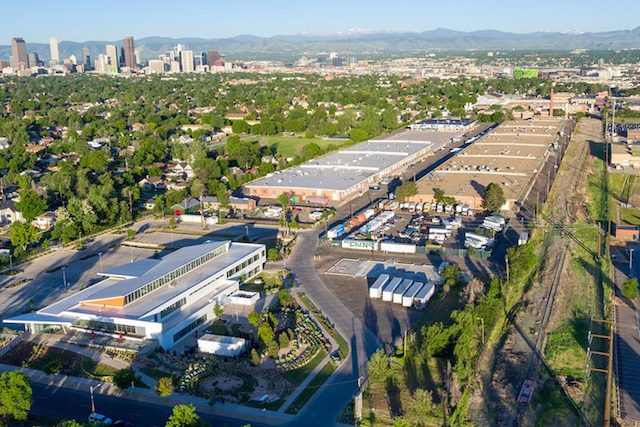 The portfolio is located in a Qualified Opportunity Zone and being acquired by a joint venture partnership between Portland, Ore.-headquartered ScanlanKemperBard (SKB) and Birmingham, Ala.-based Harbert Management Corporation.

Located in Denver’s Lower North Central industrial submarket, 3800 Steele Street is four miles east of Downtown Denver and the largest available infill industrial project. Built between 1940 and 1943, the properties were renovated in 2000 and feature 18-foot ceilings.

The JV now plans on renovating the portfolio again and taking advantage of Denver’s proposed 39th Avenue Greenway project—a mile-long recreational area that will also control flooding in the area—by carving out an additional vehicle access route through the center of the site.

“SKB and Harbert have a great vision for this urban flex/manufacturing space,” McBroom said in prepared remarks. “The mixed-use nature of creative office and light manufacturing weaves in well with the fabric of the surrounding neighborhood, and we are thrilled to have partnered Granite Point with the borrowers through the execution of this exciting business plan.”

Officials at GPMT and SKB declined to comment. Officials at Harbert Management could not immediately be reached.