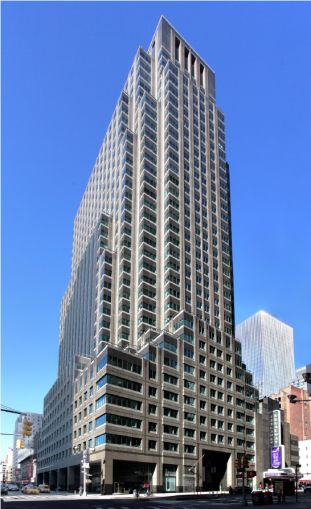 Financial compliance consultancy Exiger Holdings inked a deal to move its offices to 30,900-square-feet at the Rudin family’s 1675 Broadway in the Theatre District, brokers on the deal announced.

Exiger signed an 11-year sublease for the entire 15th and part of the 16th floors of the 35-story tower between West 52nd and West 53rd Streets, according to CBRE, which brokered the deal for the sublandlord. Asking rent was in the mid-$60s per square foot.

A spokeswoman for CBRE — which has been tasked with subleasing 600,000 square feet in the property — would not provide the name of the sublandlord but CoStar Group shows its ad giant Publicis Groupe.

Last summer, Publicis signed a 960,000-square-foot lease to relocate from 1675 Broadway to 375 Hudson Street in Hudson Square along with staff from its recently acquired data-driven marketing company Epsilon, as Commercial Observer previously reported.

“We’re thrilled to announce the first sublease agreement at 1675 Broadway,” CBRE’s Gregg Rothkin said in a statement. “This availability has generated a unique opportunity of high-quality, move-in ready sublease space with the capacity to accommodate tenants of various sizes and industries.”

Exiger currently has its headquarters nearby at 1095 Avenue of the Americas and plans to relocate to its new digs later this year.

Rothkin brokered the deal for the sublandlord along with John Maher, Paul Myers, Mike Wellen, Alex Bennisato and Cara Chayet. JLL’s Simon Landmann, Nick Gentilesco and Mitchell Konsker handled it for Exiger. A spokesman for JLL declined to comment.