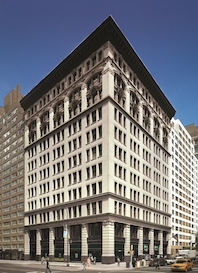 The educational company, which was founded in San Francisco in 2012, has leased the entire second floor at RFR’s 90 Fifth Avenue between West 14th and West 15th Streets, the landlord announced yesterday. It will occupy 12,602 square feet and have a dedicated ground-floor entrance on 14th Street, just west of Union Square. Asking rent and the length of the lease weren’t disclosed.

App Academy also offers programming courses at 22 West 38th Street between Fifth and Sixth Avenues in Midtown South. The program promises students that it will waive their tuition if they don’t get placed in a coding job within a year of finishing the course.

RFR’s AJ Camhi and Ryan Silverman represented the ownership in-house, and it wasn’t clear who handled the deal for the tenant.

“The floor was previously occupied by an education technology company, and the existing layout suited the real estate requirements of App Academy perfectly,” Camhi said in a statement.