The Los Angeles-based fund lender is on track to grow its portfolio of loan originations by around 30 percent this year and is eyeing an eastern expansion. 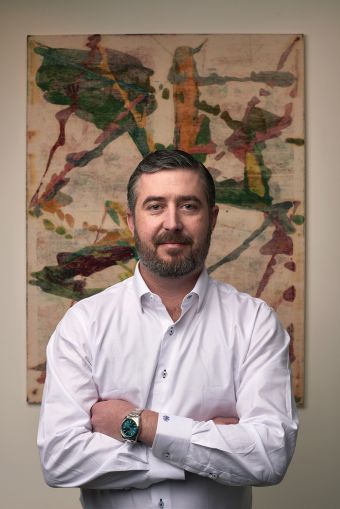 Kevin Miller, the 38-year-old founder of Thorofare Capital, was a fourth grader in Pasadena, Calif. when he overheard “older people’s” conversations and decided to invest in his first mutual fund.

The precocious grade schooler, who now serves as CEO and principal at the Los Angeles-based investment house, recalls his father and grandfather discussing Warren Buffett.

“So, I went and read Buffett’s biography and then Ben Graham’s ‘The Intelligent Investor,’ ” Miller said, joking that throughout “fourth, fifth and sixth grade, I read the books several times before I was actually getting what they were saying.”

Miller still re-reads them from time to time — “especially ‘The Intelligent Investor’ because it’s good to have a refresher on value and investing.”

Just over 30 years after Miller’s early exposure to the world of finance and investment, and several years after officially founding Thorofare Capital in 2010, Miller and his group have originated over $2.2 billion in debt across 253 transactions through a series of five private debt funds that make up its multi-strategy platform — starting with Fund I in 2010. In the last several years, the firm has also established two strategic origination and servicing joint ventures with massive L.A.-based investment manager DoubleLine Capital.

Borrowers who spoke with Commercial Observer described Miller’s Thorofare as having the sharpness and sophistication of a stereotypical New York-based commercial real estate lending operation, coupled with a rather comfortable, relaxed “West Coast vibe.”

But the Thorofare team shouldn’t be mistaken for a leisurely bunch.

What sets the lender apart from its competitors, at least in the eyes of some of its borrowers, is the speed at which they work, paired with an equity investor’s approach and bank-like discipline.

In December 2018, the firm executed a four-day close for borrower Somera Road on its acquisition of a non-performing first mortgage on a 572,241-square-foot office tower in downtown Louisville, Ky. New York-based Somera was sourcing the distressed asset, located at 500 West Jefferson Street, out of a commercial mortgage-backed securities (CMBS) deal issued in 2006. Thorofare’s $33.2 million structured credit package included a $17 million, short-term bridge loan to pay off the CMBS debt at a discount, plus an upsize option of just over $16 million to cover things like capital improvements and leasing commissions.

“We got the request on a Friday, and by Wednesday we had closed it,” Miller recalled.

While Somera Road founder and principal Ian Ross declined to speak directly about the deal on 500 West Jefferson, he said Thorofare really stands out in the area of “the quick-close, ‘not hard, hard money.’ More expensive, but they’re not breaking your shins.”

The deal reset Somera’s basis and allowed it to quickly reintroduce the asset to the Louisville market.

“The way I look at it is that they’re a great option for pretty healthy bridge stuff,” Ross said. “Not hyper-transitional; but cash-flowing, healthy bridge stuff that easily fits into a CLO. So, if you have cash-flowing, well-occupied but light-to-medium transitional, chunky stuff, I think it fits pretty well into their DoubleLine vehicle; and they can price that extraordinarily aggressively, because of DoubleLine and because of the execution they’re getting there.

“And then outside of that, I think they have pretty compelling, quick-close, hyper-distressed — call it ‘high-singles money’ — that we’ve worked with them on a couple times,” Somera continued. “I would say it’s certainly significantly less expensive than your [typical] hard money guy, and it’s an institutional process. It’s higher priced debt, but it’s higher leverage and it’s extraordinarily quick and reliable.”

Somera Road has closed on three transactions with Thorofare; its other deals include industrial assets in suburban Chicago and in Jacksonville, Fla. Ross said the Jacksonville transaction involved a fully occupied, 10-year lease duration on an industrial asset where “we needed to build up the space for the tenant after signing the lease, and [Thorofare was] a really good fit for that.”

“They’re just a little bit more thoughtful [than many other fund lenders] and really open to all markets and asset classes,” Ross added. “They think through the deal like an equity investor and they put themselves in a borrower’s shoes and try and figure out ways to make things work. Kevin’s got a great team of lieutenants working around him. He gets it done, and they’re poised and tactful and they treat borrowers the way they want to be treated.”

Straight out of the University of Southern California in 2005, Miller said he “stumbled upon” private money lending, the predecessor to the debt fund world.

“After finishing my undergraduate degree, I interviewed with several money-center banks, CMBS lenders and the like, and I didn’t think the risk-adjusted returns made any sense on their loans,” Miller said. “I also thought that I’d probably be out of a job within a couple years because of the lax underwriting [at the time].”

After being disenchanted by many of the traditional mortgage products he came across out of college, Miller received an introduction to the private lending sphere through an old friend. Miller said he was fascinated by it and “saw a great deal of opportunity to institutionalize the space.”

From 2005 to 2010, Miller independently originated, funded and serviced his own loans with capital from private investors. He enjoyed the efficiency and speed to close — which he found to be exciting compared to the bureaucracy and red tape one would find at a bank or institutional shop — the certainty of execution, and the fact that the private money lending business, with shorter term durations, commanded much higher yields and a lower loan to value.

“After syndicating loans for all of 2005, I became convinced that the correct way to execute this strategy was through a discretionary lending fund, so I spent the summer of 2006 writing the PPM [primary placement memorandum] and business plan for what is now Thorofare’s flagship vehicle,” Miller said. “I did very well by my investors through the downturn and then was approached by several, and in early 2010, they told me it was time for me to start Fund I … You’re essentially making a credit that has a better risk-adjusted return.”

But, Miller said, his investors had a couple stipulations for the then 28-year-old who was to spearhead this fund vehicle.

Trion Properties’ managing partner Max Sharkansky is one of Thorofare’s earliest borrowers, having worked with them on around a half-dozen deals starting in 2011.

“Our first deal together was at the end of the downturn, when we were buying non-performing debt secured by multifamily,” Sharkansky said of his firm, which primarily focuses on value-add multifamily opportunities. “And [Thorofare was] actually financing notes. So, we called them to get a loan against the loans we were buying, and they were able to understand that and wrap their heads around all the processes involved in that. Ultimately, it was a very successful transaction.”

Sharkansky recalled a $12.8 million, floating-rate acquisition and capex loan — although he wouldn’t go into specifics — from Thorofare that facilitated Trion’s purchase and renovation of an asset that became 180 Flats, a 48-unit luxury rental property at 180 Buckingham Avenue in Redwood City, Calif., near technology presences such as Facebook, Google and Oracle. Trion bought it for $15 million, held it for 26 months, and sold it for just under $21.7 million, as per its website. The four-story property was 94 percent occupied at the close of the loan in July 2016 and at one point was generating an 18.7 percent internal rate of return, according to a case study from Trion’s website.

“[The deal in Redwood City was] out of their low-yield bucket,” Sharkansky said. “We went in and took an older, tired asset in an area that was [up and coming and had tech employers like] Oracle and Facebook. [The loan covered] the acquisition and [our plan was] to improve it, increase rents substantially and then sell it.”

“[Thorofare] is small and nimble,” he added. “They’re very entrepreneurial in spirit, where they have a grasp of what the operator is trying to accomplish, and they have a grasp of institutional-level real estate investing. But they don’t have that giant slog of bureaucracy where you have to go through [all these levels of approval]. It’s very simple to get things done in a very timely and efficient fashion.”

Thorofare has recently made an effort to dial back on hospitality loans, due to many of the submissions failing to “pencil” out, according to the company’s head of originations, Felix Gutnikov. Going forward, the company is planning to gradually increase allocation to data centers and seniors’ housing, and Miller said the firm will grow its production and originate about $1 billion in 2020, aiming at about 25 to 30 percent portfolio growth.

This month, Thorofare is planning to open a New York outpost, and it’s eyeing secondary markets such as Dallas, Denver, Atlanta, Portland and Seattle to further expand its footprint. Miller also hinted at the firm launching an additional mortgage fund, a new fund to go alongside in primarily vehicle and the two DoubleLine origination and servicing joint ventures.

As a child of the financial crisis, and as an early player in the aggressive debt fund world, one thing Miller said he will make certain remains consistent within his firm is a familial culture of responsibility.

“The way we’ve implemented our ethos has led to that culture, which was very important to me after walking out of my office in Pasadena [in 2008] to see a run on the bank happening at IndyMac [Bank],” Miller said. “That’s something I’ll never forget.”