Six months into his tenure as head of REBNY, what’s the new president up to? 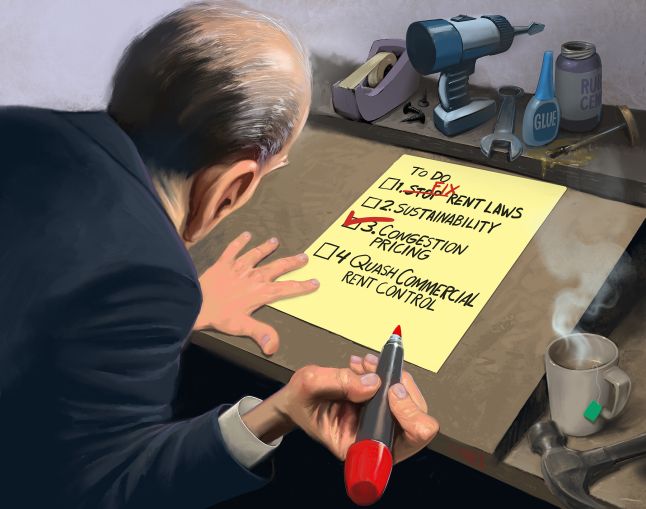 The Real Estate Board of New York's James Whelan has a lot on his to-do list for 2020. Illustration: Fred Harper

As James Whelan, the nearly 6-month-old president of the powerful Real Estate Board of New York, puts it, the trade organization touches on “a lot” of issues in city and state government that it fights for.

And despite some recent setbacks, Whelan said REBNY is still adamant about pushing for the passage of bills it feels would be a boon to the city and the real estate industry.

“We think some mistakes have been made over the last year or two,” Whelan said. “But we remain committed to working with elected officials and other groups to try to ensure a set of policies moving forward that’s gonna work out for the betterment of the city.”

At the start of the new year, here’s a look at a few things on Whelan’s to-do list for 2020, and one he can already cross off.

An idea that’s been floating around the city since the 1980s returned in November 2019 in a much stricter form: commercial rent control.

A “rent-guidelines board in the area of rent-regulated housing has hardly been a panacea for addressing the city’s affordable housing needs,” Whelan said. “I’m not really clear why one would think a rent-guidelines board would operate successfully in a commercial environment.”

REBNY members came out in full force the last time a similar bill had a hearing in 2018 and Whelan said the group will continue to fight against the latest version in 2020.

“We’re just going to keep pushing against it and try to educate elected officials and the media as to why it’s a bad idea,” he said.

2. Increase sustainability around the city

The New York City Council passed a nine-bill package in April 2019, dubbed the Climate Mobilization Act, that requires landlords to reduce buildings’ carbon emissions 40 percent by 2030 and 80 percent by 2050.

REBNY fought against the bills, arguing it would cost landlords at least $4 billion citywide to make the renovations necessary to meet the emissions caps set by the law, but they still passed. Whelan isn’t done advocating against some of the changes but REBNY does plan to push to help the city move towards more reliance on green energy in the future.

REBNY recently announced it would work together with Gary LaBarbera and the Building and Construction Trades Council of Greater New York to fight for legislation both groups think would help New York City in the future, and a major shared goal is increased sustainability, Whelan said.

“To make the city’s new green legislation work … there’s going to be a critical need to create a lot of green energy,” Whelan said. “It’s clearly an area where our interest and the interest of the Building Trades align, and it would have great benefit for the general public in New York City if we could go to a green grid.”

Whelan said the group plans to push state legislators to make changes to the reforms in order to help landlords better deal with the new rules, especially the amount owners can add to the rent for building-wide improvements, which was severely limited in the new rules.

“We’re going to redouble our efforts moving forward in terms of seeking modifications,” he said. “So that landlords, moving forward, have the ability to maintain their buildings quality at a level that we can all be proud of, while at the same time seeking to work with elected officials to address what the city’s true affordable housing needs are.”

This is the one item on the to-do list that can be crossed off as complete. Whelan worked on an early version of congestion pricing — which would charge drivers to pay to pass through parts of Manhattan — more than a decade ago when he worked in Mayor Bloomberg’s administration as the chief of staff for Deputy Mayor of Economic Development Dan Doctoroff, and congestion pricing finally passed last year.

REBNY partnered with several organizations — including the Environmental Defense Fund and Uber — to fight for the bill, which was approved by the state in April and is set to take effect next year. The plan is estimated to raise $15 billion for the cash-strapped Metropolitan Transportation Authority; the prospect of fixing the city’s crumbling subway system was part of the reason REBNY backed congestion pricing.