One Year Later: Looking Back at Amazon Ditching Queens

After Amazon decided they wouldn't move their HQ2 to Long Island City after all, effectively breaking the NYC real estate industry's heart, Queens is getting back to business with steady leases. 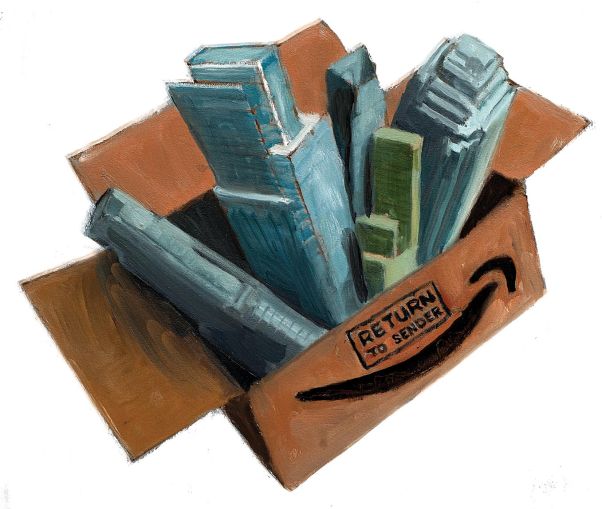 It was the Valentine’s Day break up text that Queens residents never saw coming.

Long Island City broker Eric Benaim was in his office that day around noon, thinking about his evening plans.

“I got a push notification on my phone and probably yelled, ‘Holy shit!’ ” the Modern Spaces CEO told Commercial Observer. “At the same time, everybody started coming out of their offices and looking up at their desks and saying, ‘Is this true?’ Within one or two minutes of that, my phone started exploding with text messages asking, ‘Do you know anything?’” He would spend the rest of the day doing 50 interviews.

Greg Smith, president of the Queens commercial real estate firm JRT Realty, was on a flight to Nashville. He didn’t have service on his phone, but he found out anyway.

“I saw it in some reference to a blog and I thought it was a joke,” Smith said. “There was so much buildup to the announcement it just seemed out of left field for no substantial reason.” To make matters worse, by the time he landed, Amazon announced it would open a satellite hub in Nashville.

Back in Manhattan, the news exploded like a ConEd substation in a hurricane. Warburg Realty broker Jason Haber was cutting through Central Park for an afternoon meeting at his office when he noticed the news flash on his phone.

“Normally when I see those push alerts, I [think] Donald Trump said something again, but I stopped walking in shock,” Haber said. “I was like, you’ve got to be kidding. This is the biggest unforced error in New York since we let the Dodgers leave Brooklyn.”

New York City and Amazon’s relationship began a little more publicly than most affairs do — a nationwide contest in which potential partners submitted applications loaded with tax incentives touting how great they are (OK, maybe that does sound at least a little like a dating app).

The world’s largest online retailer had been growing at such a clip that it needed a second headquarters outside Seattle. Amazon received more than 200 proposals from cities desperate for its job-creating presence before the company narrowed its field of prospects to 20 by January 2018.

But the neighborhood’s painstaking makeover is largely due to the efforts of Mayor Michael Bloomberg and then-Deputy Mayor Daniel Doctoroff, who transformed the industrial backwater into a crystalline village of condo towers. Hizzoner once pitched Hunters Point as a site for an Olympic Village for New York’s 2012 Summer Olympics bid. When it failed, the city purchased 30 acres in Hunter’s Point South for $100 million to provide housing, retail and new waterfront parks, essentially birthing a new neighborhood on vacant land.

Long Island City was already the city’s fastest growing neighborhood in 2017, according to New York magazine, and became an attractive finalist for Amazon thanks to its abundant subway lines and highways promising Manhattan access in mere minutes, not to mention its enticing stretch of waterfront views. Gov. Andrew Cuomo and Mayor Bill de Blasio threw in $3 billion of tax giveaways — the largest package ever for a private company — and a heliport on the East River for good measure.

That was enough to sway Jeff Bezos, whose company announced in November 2018 that it would build new headquarters in Long Island City and Arlington, Virginia, adding more than 25,000 jobs at each location.

The relationship was going so well (save for a few rocky patches from civic leaders, organized labor groups, and Western Queens politicians who opposed the tax incentives and feared rising rents in surrounding neighborhoods).

Then, just five months later, it was over in the blink of an eye. Queens residents who wanted the partnership to work out rapidly went through the five stages of grief, starting with denial and anger, then leaping straight into bargaining: “A week later I started a petition with local leaders and started making phone calls,” Benaim said. “I got a call from Amazon and I kind of thought for a few weeks we might have a chance. I tried to do a campaign to get them back and obviously that didn’t work. Onward and upward as they say.” Depression, acceptance: A year after the split, city leaders have mostly gotten over the breakup.

“I’ve moved so far on from Amazon, it’s a distant memory,” New York Building Congress CEO Carlo Scissura told CO. “Maybe Amazon was needed to get a conversation going the way the Olympics or Jets were needed to get the West Side going. The lesson is that it didn’t work but it opened eyes to potential opportunity to a great urban center that isn’t Manhattan that allows for incredible potential in the future.”

Some borough boosters do still have lingering feelings for the global retailer which could have been Queens’s great love, as Carrie Bradshaw might put it.

“People are still disappointed,” Benaim explained. “I was one of the people who led the efforts to save them. We’re a little upset we didn’t decide to have a voice earlier on.”

But Queens appears to be doing just fine these days without Amazon.

There hasn’t been a flurry of commercial real estate sales in the borough — only 88 in the third quarter of 2019 versus 131 in the same period of 2018 per B6 Real Estate Advisors — but a slower market isn’t a result of Amazon’s whims, analysts say.

“I wouldn’t expect to see or attribute a drop in activity to Amazon on its own, especially when I look at other areas of the market; the trend has been fewer transactions in 2019 overall,” Ariel Property Executive Vice President Michael Tortorici said. “Queens has all the ingredients. It’s just going to grow at a slower rate. The long-term trajectory of the borough is very positive.”

Some of Queens’ loss has been Manhattan’s gain. Tech companies accounted for 35 percent of yearly leasing activity in Manhattan, according to a report from Savills, with Facebook signing 1.6 million square feet at Hudson Yards and, yes, Amazon, like a shamed Mr. Big, crawling back to the city with an additional 335,408 square feet at SL Green’s 410 Tenth Avenue.

But the transactions over the past year in Queens have been encouraging.

A month before Amazon left town, Tishman Speyer finalized deals with Macy’s and New York-Presbyterian to move into the JACX, filling the rest of the 1.2-million-square-foot, dual-towered space which would open in the summer, as CO previously reported.

In March, MaryAnne Gilmartin’s L&L MAG reached a deal to develop 1 million square feet on Vernon Boulevard adjacent to the Amazon site for a mixed-use project.

Then in June, landlord Savanna, which had been jilted by Amazon and left to fill a million square feet of office space at One Court Square, bounced back by hooking up with telecommunications giant Altice to lease 103,000 square feet and Centene, a Medicaid managed care company, for 500,000 square feet. Savanna recapitalized its site for $880 million in January as it searches for more tenants.

And in September, Long Island City celebrated the opening of a new $41.5 million public library branch that the New York Times architecture critic called “one of the finest public buildings New York has produced this century.”

Other projects are on the horizon. Benaim’s firm launched Three Court Square in May, selling 240 units out of its 802-unit building. And JRT Realty is working with Kaufman Astoria Studios on a 100,000-square-foot studio office that should be ready by the spring.

“It’s drawing a lot of attention,” Smith said. “People are touring and negotiating.”

Residential sales in Western Queens have drawn even more notice. The area’s median sales price was $881,975 in the fourth quarter of 2019, up 13 percent than the same time a year ago. And there were 357 sales, up 41 percent from the same period a year ago.

Analysts credited a dearth of properties and residents being priced out of Brooklyn for the price increases.

“There’s a tremendous flow of demand out of Brooklyn and there is limited product relative to Manhattan and Brooklyn,” real estate appraiser Jonathan Miller of Miller Samuel told CO. “Affordability is higher in Queens and there’s not enough supply.”

The windswept site where Amazon would have plunked its HQ2 complex remains an unfilled pit in Queens’s heart, but not for long. Property owners including TF Cornerstone, Plaxall, L&L MAG, and Simon Baron Development have been working with the City Council, city agencies, business leaders, and residents to come up with a long-term plan for the site. The “Your LIC” consortium has held two community workshops since the summer with two more planned this year, to help Queens consciously uncouple and move forward.

“Amazon taught us a lot. It was proof that the LIC waterfront can be a strong commercial destination, but one of the main criticisms was that the community was not involved in that process,” Jovana Rizzo, a spokeswoman for Your LIC, said. “We are taking a completely new approach, doing extensive community outreach before we advance any plan or rezoning.”

Queens is ready to put itself out there again and meet some new real estate developers and tech CEOs. Who knows? Maybe there’s a new soccer stadium or a convention center in Long Island City’s future.

“It’s time to do a visionary planning process; let’s build the Rockefeller Center of tomorrow,” Scissura said. “Amazon has gone. We’ve moved on.”