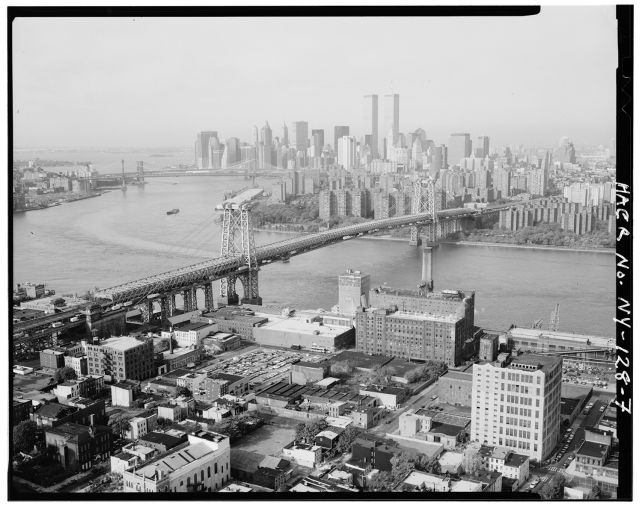 An aerial view of 1970s Williamsburg. Image: Library of Congress

Jim Whelan, the current president of the Real Estate Board of New York, is facing strong political headwinds as the industry grapples with some of the toughest new rent laws since the 1970s. But each president of the influential real estate trade organization has struggled with their own set of policy and land-use challenges since the position was created in 1972.

In the early to mid-1970s, New York City was gripped by a financial crisis that famously forced then-Mayor Abe Beame to ask the federal government for a bailout. After the New York Daily News’ “Ford to City: Drop Dead” front page in 1975, the city approached the Real Estate Board of New York to ask whether major landlords would pay a full year of their property taxes in advance. Thousands of city workers were laid off or furloughed, and the funds needed to pay for city services like trash pickup were disappearing.

REBNY rallied the major real estate families — the Rudins, Resnicks, LeFraks, Dursts, and Silversteins — to pony up. The president of REBNY at the time, Helmsley Spear CEO D. Kenneth Patton, had served as the head of the city Economic Development Corporation under Mayor John Lindsay and convinced landlords how important it was to put forth the money.

“When the call went out to pay a full year’s taxes in advance because the city was running out of cash, most, if not all the families did it with all their buildings,” late office builder Burt Resnick told the Architect’s Newspaper in 2010. “I remember Lou Rudin saying, ‘We cannot move our assets out of the city, so we’ve got to do this.’ ”

After the city had escaped the worst part of the fiscal crisis, REBNY was able to focus on pressing land-use issues that had crystalized in the late 1960s.

“In the ’60s we thought the city was going to be an industrial mecca and by the ‘70s we’d lost half a million jobs,” said longtime REBNY research chief Michael Slattery, who joined the organization in 1986. “One of the things we wanted to highlight was the change in Midtown South, which went from an industrial district to an office district.”

Slattery’s predecessors at REBNY used big mainframe computers and copies of the Real Estate Record & Guide, a weekly paper that reported on mortgage and sales activity, to track what was happening. The trade group used that data to lobby for a rezoning of Midtown South and Chelsea, which had been downzoned in 1981. Although its efforts mostly led nowhere in the 1980s, the Department of City Planning did finally agree to upzone Sixth Avenue between West 24th and West 31st Streets in 1995. Chelsea was similarly upzoned for mixed-used development in 1999.

In the late 1980s, when the murder rate exceeded 2,000 for the first time, REBNY and its industry members were so alarmed that they offered to pay higher taxes if that money would go toward public safety. The city had dramatically cut back the number of cops in the late 1970s, and the administration of Mayor Ed Koch had been slow to restore the number of officers to pre-fiscal-crisis levels.

“The vacancy was so high that it was starting to feel like the 70s in some places, when there was a lot of abandonment,” Slattery noted.

After Rudy Giuliani became mayor in 1994, REBNY successfully pushed through a development plan for Lower Manhattan that included a special tax incentive to convert office buildings to apartments.

“It started the transformation from a commercial neighborhood that was quiet after 5 o’clock to a mixed-use neighborhood,” Slattery said.

REBNY worked on a similar recovery plan for Downtown after 9/11, when both state and federal funding for redevelopment was plentiful.

During the Bloomberg administration, the real estate lobbying organization advocated for major residential rezonings, largely in industrial areas of the city.

These efforts included the incredibly impactful Greenpoint-Williamsburg and Long Island City rezonings, which Slattery called “missed opportunities to create a lot more housing. The shortage of housing that we’re facing was clear and present and perhaps there should have been more of a focus on trying to create more housing than we did.”

Steven Spinola, who was REBNY president from 1986 to 2015, presided over much of this transformation.

During one of his last interviews in office in 2015, he told Commercial Observer, “Think of the neighborhoods that people are now living in that, 30 years ago, people would have said, ‘Wait a minute, where are you living?’ You can no longer use the term ‘outer borough.’ It used to be that when you referred to Brooklyn, Queens, the Bronx, you would call it the outer boroughs. It’s not relevant anymore. People live and work in Brooklyn. You’re seeing so much activity going on. Look at Long Island City and the waterfront. I wouldn’t have imagined that 10 years ago, 15 years ago.”