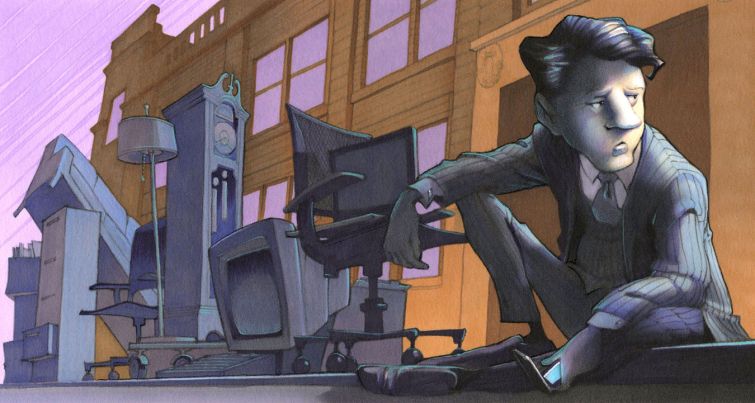 Some small and mid-sized landlords are feeling the financial squeeze and selling their rent-stabilized buildings in the wake of last June's rent law changes. Illustration: Bruce MacPherson/For Commercial Observer

When the seven-story apartment building at 2301 Broadway in the Upper West Side hit the market a year ago, the longtime owners wanted $60 million for the 33-unit property, of which 19 were rent-regulated dwellings.

The building at the corner of West 83rd Street finally sold in December for $37 million. That price included the 61,200-square-foot apartment building, 33,650 square feet of air rights and four fully leased ground floor retail spaces. The Polak family, which had owned the building since 1976, still walked away with a tidy profit. The buyer is an anonymous LLC represented by real estate law firm Goulston & Storrs.

The family and their price drop are emblematic of the sea change in New York City since the newly Democratic-controlled state legislature passed a raft of sweeping rent reforms last June. Tenants have the strongest protections they’ve had in half a century, but landlords have lost many of the mechanisms they would normally use to raise rents. Investment sales brokers say that many small and mid-sized landlords — particularly families that might own one or two buildings with rent-stabilized or rent-controlled units — are either selling their properties or preparing to sell.

“The people that are putting properties on the market right now tend to have a lot of equity, and they can be more discretionary sellers,” said Michael Tortorici, an investment sales broker at Ariel Property Advisors. “These are generational families that are moving on or splitting up partnerships. Or it’s owners that have some holdings [in which] they have a decent amount of equity, and maybe [the property] doesn’t fit in with the rest of their portfolio.” He added that baby boomer owners retiring and getting their estates in order will also be a factor driving these kinds of sales over the next couple years.

Under the new law, owners essentially can’t raise rents by deregulating apartments and can only pass on $15,000 worth of apartment renovations over 15 years to tenants. The legislation also lowered the percentage of building-wide renovation costs that can be added to tenants’ rents from 6 percent to 2 percent.

All of this means that many property owners have woken up to a world where their buildings are worth 30 to 50 percent less than they were a year ago, according to investment sales experts.

Purchase prices for stabilized apartment buildings have dropped so dramatically that some landlords might not want to sell at all, said Tortorici. Others might be waiting to put their properties up for sale on the chance that the real estate industry can reverse the rent laws, either through lawsuits or by lobbying the state legislature, he suggested.

And the sales market is mirroring these fears. The number of multifamily apartment building deals in the $7 million to $75 million price range fell 57 percent over the past year, from 385 sales in 2018 to 212 sales in 2019, according to data provided by commercial brokerage Ackman-Ziff. PropertyShark found similar trends in its November sales report: In the first 11 months of 2019, the city recorded $7.3 billion in multifamily transactions, which is $3.8 billion less than what was sold in the same period in 2018, the real estate website’s data showed.

But the drop in pricing isn’t all bad news. Now that New York City apartment buildings are selling at a discount, investors from other parts of the country — and the world — are starting to take a closer look at the five boroughs.

“Multifamily operators from around the country see New York as a buying opportunity,” said Tortorici, because they “see value in New York and see discounted prices that they haven’t seen in a long time.”

Ofer Cohen, an investment sales broker and founder of Brooklyn-focused brokerage TerraCRG, said “large semi-institutional families and institutional investors” from Europe had been expressing interest in Brooklyn apartment buildings recently because they weren’t afraid of rent regulation. Germany, for example, has rent regulation written into its legal code, and Berlin recently tightened its rent control to ban almost all rent increases for the next five years.

He added that many local investors who are wary of buying in the five boroughs right now are looking at cheaper cities instead.

Shaun Riney, a broker who focuses on multifamily sales at Marcus & Millichap, said that many small and mid-sized landlords are trying to sell because they don’t see many other options.

“We’ve put a lot of newer listings on the market from people who wouldn’t sell if there were any other way of making money,” Riney noted. “What the [state] has done has stripped out all the ways of making money from rent-stabilized buildings.”

He added that “there’s a lifestyle choice that also comes into factor. You’re asking people to show up every day, work 60 hours a week and have no idea if they’re going to increase their net operating income. And you are targeted and treated like you’re an evil person at every step. There’s a lot of people doing that lifestyle gut check feeling like, ‘This is not how I want to live my life.’ ”

Larger buildings with 50 or more apartments are still selling, Riney explained, because those properties attract institutional buyers and local real estate families with cash to spend. But “there’s very little buyer action” on 10- to 40-unit buildings like 2301 Broadway. “There’s just nobody that wants it.”

A State Supreme Court judge last month to overturned the Inwood neighborhood rezoning, which was originally approved by the City Council in 2018. Justice Verna Saunders argued that the city’s environmental review process failed to property analyze the socioeconomic impacts of the rezoning, including the displacement of residential tenants and minority- and women-owned businesses.

Andrew Sasson, an investment sales broker at Ackman-Ziff, called the Inwood decision “the most terrifying thing I’ve ever seen in New York City real estate. You have people in Inwood that may have lost 70 to 80 percent of the equity from that rezoning in one night. I don’t think there could be anything worse.”

He also pointed to the proposed Bushwick rezoning, which faces strong opposition from local Councilmember Antonio Reynoso and is unlikely to move forward, as another example of the headwinds facing real estate in the city.

Longtime owners of two to five buildings are the ones looking to sell at the moment, he said. They want to unload their properties because they realize the rent laws may not change for at least five years, Sasson explained, and they don’t want to wait that long because the economic outlook could be worse by then. And folks who can afford to buy right now are “families who own massive portfolios in the neighborhoods they’re already in and operators who partner with funds.”

But he argued that the biggest contributors to the slowdown in apartment building sales are sellers who expect pre-rent-reform prices.

“I think until sellers come to the table and realize what the reality is, it’s going to be tough for more transactions to happen.”