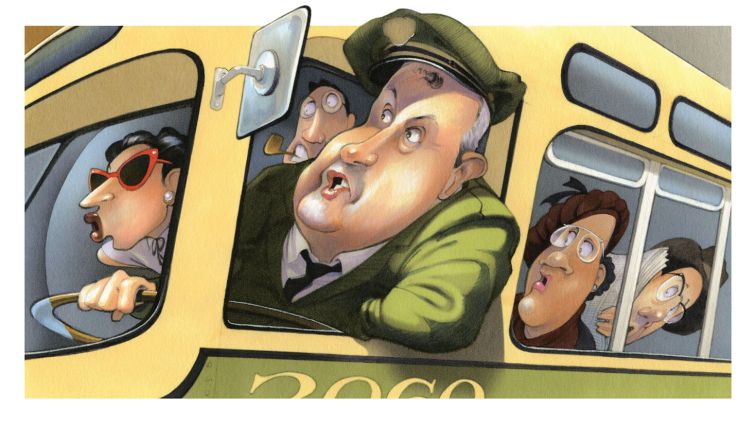 We rail against stalled trains, grumble about weekend delays, tweet about subway pizza rats and cigarette-smoking cockroaches, and gripe about navigating a city of 8 million people on an aging infrastructure, built for a world that no longer exists. Loving to hate the MTA is perhaps the one thing that unites us all.

That unity was on display this past year, when a mix of industry lobbyists, community groups, transit activists and politicians banded together to pass congestion pricing, a policy that will charge drivers a fee for driving into Manhattan below 59th Street.

The policy, which will go into effect in 2021, will provide the Metropolitan Transit Authority with a much-needed revenue source to fund its ambitious and urgent plan to update the public transit system.

“Congestion pricing was the rare priority in New York politics that everyone from the real estate industry to social and economic justice activists agreed on,” said John Raskin, director of the transit activist group Riders Alliance. “And even with that being true, it took 10 years for that to pass.”

Over 100 groups participated in the Fix Our Transit coalition, including the Real Estate Board of New York, which used both its influence and political know-how to support the campaign.

“A well-run mass-transit system is critical to the city’s success,” said James Whelan, REBNY’s president. “It’s something that the real estate industry is heavily invested in — literally.”

The consensus behind congestion pricing was, in many ways, a singular case, but it indicates a broader agreement from diverse and often conflicting interest groups about the need to prioritize the city’s infrastructure and prepare for an even denser, less car-centric future.

It’s also an example of the way the real estate industry’s influence can be wielded to improve the city in ways that benefit both the development community and the city as a whole — a trade-off more New Yorkers have come to expect.

“People are a lot more sophisticated about their city, and they can research a whole host of issues to be better advocates,” Della Valle said. “It’s great to hear the community advocate for themselves.”

SL Green Realty Corp. contended with that community input when it proposed its massive Grand Central Station-adjacent project, One Vanderbilt.

“The community raised their hand and said, ‘Transit improvements need to be in place before new major commercial projects are built,’ ” said Rob Schiffer, an SL Green executive. “At that moment, we immediately said, ‘We need to put a plan in action here, where we’re able to make improvements to support the additional density that we’re bringing to bear on the area.’ ”

In order to build the 77-story tower on the block adjacent to Grand Central Station, SL Green proposed a plan where they would invest $220 million to increase capacity of the transit hall and expand it within One Vanderbilt. Some of the improvements, such as new stairways and exits at the 42nd Street station, are already open to the public. The expanded terminal within One Vanderbilt, which is scheduled to open in August 2020, will facilitate traffic flow, and was designed in anticipation of the long-awaited expansion of the Long Island Rail Road into Grand Central Station. The extension, which will run from the existing LIRR Queens station, is scheduled to open in late 2022.

A key aspect of One Vanderbilt’s model, said Schiffer, is that SL Green can’t occupy the bonused area of the building that was approved in exchange for the public infrastructure commitments until its components are complete and open to the public.

While One Vanderbilt is unique in its scale and centrality, it’s a model that’s being used loosely in other areas as well.

Della Valle’s Alloy is building a two-tower development at 80 Flatbush in Downtown Brooklyn, a project which will add significant traffic and density to the area. Alloy worked closely with the community to alleviate some of the expected congestion from its project, and attended over 120 meetings before getting the necessary approvals. In addition to including two schools within the property, the developers eliminated parking and loading docks, and plan on limiting load times for tenants.

“At its outset we were perceived to be the developer — I’m a forty-something white guy and I’m instigating change,” Della Valle said, but he believes he bucked the stereotype by being transparent and available to community members, and showing that he was invested in the community.

“I believe that the real estate industry has a responsibility in making the city a better place,” Della Valle said. “We believe that the development community should participate in these discussions, in these decisions, and in public-private partnerships, to work collectively, to inform city agencies of our needs. It can’t be insular.”

Alloy is also one of several real estate developers who are involved in transit issues on a neighborhood level, as members of the Downtown Brooklyn Partnership, which recently released a plan for a reimagined Downtown Brooklyn streetscape. The area is well served by public transit, so the challenge was to create a walkable and easily navigable Downtown that will facilitate pedestrian traffic flow and encourage more visitors, said DBP president Regina Myer.

“People realized that the strength of our Downtown is the people using public transit and walking,” Myer said. “That’s really key as we move from being dependent on personally owned vehicles.”

Unlike Downtown Brooklyn, some developing neighborhoods are far from public transit, and developers in those places are focused on providing alternative transit options. TF Cornerstone, which has a large number of projects in Long Island City, is heavily invested in improving the infrastructure there, said Jon McMillan, the company’s planning director.

The company supports robust bike infrastructure, has introduced private shuttle services, and is pushing for the city to allow scooters, McMillan said. (Governor Cuomo recently vetoed a bill that would have legalized e-bikes and e-scooters, so the fate of Lime-like scooter programs is unclear at the moment.)

Ultimately though, McMillan said, there are limits to what developers like TF Cornerstone can do, other than participate in the conversation.

“We’re just advocates,” he said. “The City Council ultimately controls most of this.”

REBNY doesn’t have any specific transportation initiatives planned for the upcoming year, but Whelan said that they’ll continue to monitor the situation.

“The money was put forward to ensure that New York City has a top-notch 21st-century mass-transit system,” Whelan said. “That’s critical for the city’s future and for the city’s success and that’s one of the big reasons we got involved.”

Riders Alliance’s Raskin agreed that the work is just beginning.

“Congestion pricing was a huge step forward,” he said, in allowing the state to progress on its plan to fix the transit system. “But whether or not that translates to reality remains an open question and requires dedication and attention from everybody.”