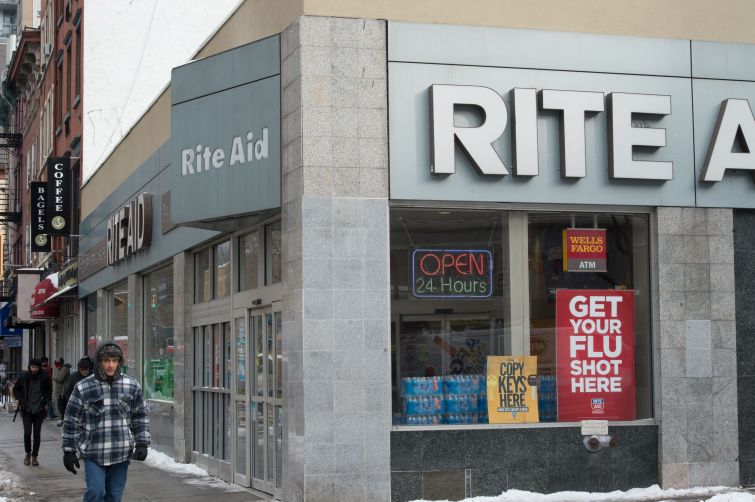 Rite Aid suffered some of the biggest losses of any NYC chain as many of its locations closed or were rebranded as Walgreens. Photo: Bryan R. Smith/Getty Images

Major retailers have been disappearing from New York City for a while. But this year saw a 3.7 percent decline in the number of chain stores in the five boroughs, marking the largest year-over-year drop in national retail locations in the past 12 years, according to a new report from the Center for an Urban Future (CUF).

The nonprofit think tank found in its latest “State of the Chains” report that more of the city’s chain retailers are shrinking rather than growing. Fast-casual healthy food chains continued to succeed, while some of the less-savvy fast-food retailers slumped. Traditional retailers that sell pet supplies, clothing, jewelry, shoes and cosmetics also shuttered a large number of stores in the face of growing competition from Amazon and other e-commerce operators.

All told, the number of chain stores in New York City declined by 304 locations to reach 7,832 stores, in 2019. Last year the city had a net loss of only 27 chain store locations across the five boroughs, or a 0.3 percent decline, as Commercial Observer reported at the time.

Retailers that suffered the most included Subway, which shuttered 43 locations, and Mattress Firm, which dropped 20 stores. Rite Aid lost 58 stores, as many locations were either closed or absorbed by Walgreens.

Eight chains shuttered all their locations in the five boroughs, some of them driven by bankruptcy filings, including Payless Shoes with 71 stores, Petland Discounts with 60 stores, along with Avenue, Gymboree, Crabtree & Evelyn, Bebe and FYE. Beauty supply store Ricky’s also closed 12 of its 14 stores.

“When I look at all the numbers, the big takeaway is that it’s not looking good for brick and mortar clothing stores,” said Jonathan Bowles, executive director of CUF. “It used to be that some of those stores were still expanding. This year, we counted more than a dozen clothing and shoe retailers by themselves that had a net loss in stores. We’re at a point where almost every merchandise retailer has pulled back.”

On the food front, the biggest losers besides Subway were Golden Krust with 15 store closures, Little Caesar’s with 11 closures, and Two Boots Pizza with seven closures.

So who’s dominating the market? Dunkin Donuts remains the largest chain in the city with 636 locations, followed by MetroPCS (468) and Starbucks (351).