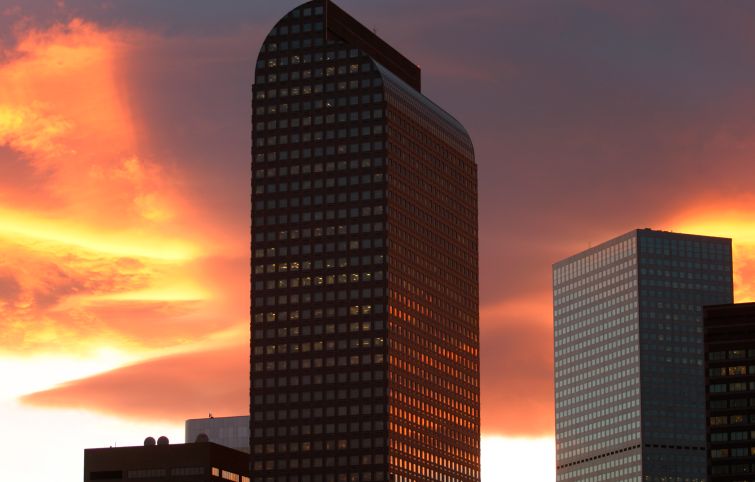 The deal, which includes a $327.7 million senior mortgage as well as a $45.3 million mezzanine loan — both from the Manhattan-based investment bank — will be sliced into bonds and sold off as a single-asset CMBS transaction. Meanwhile, the building’s ownership — a fund controlled by Boston’s Beacon Capital Partners — will use the proceeds to knock out a previous $282.2 million mortgage from MetLife.

Beacon bought the building in 2012 for $387.5 million, and has since invested $75.8 million in renovations and improvements.

The two-year, floating-rate debt comes with three one-year extension options and an interest-only structure that will save Beacon from paying back any of the loan’s principal before 2021 at the earliest. A recent appraisal valued the 52-story office tower at $475 million, implying a 69 percent loan-to-value ratio on the senior debt and a 78.5 percent LTV on the full leverage.

Built in 1983, the 1.2-million-square-foot tower is also known as the “Cash Register Building” for the way the curving profile of its higher floors matches the silhouette of an old-fashioned till. Its namesake, Wells Fargo, leases 245,000 square feet in the building for its regional headquarters in the city. But its second- and third-largest tenants hail from more volatile sectors.

The second-biggest tenant is Whiting Petroleum, a company that drills for oil in the Western United States. KBRA analysts noted that while Whiting is an established, 40-year old company, its industry has been hit hard by falling petroleum prices in recent years, a phenomenon that’s already slammed office markets in oil-concentrated cities such as Houston of late. (Seven smaller tenants in the Wells Fargo Center also depend on the oil industry for their revenue.)

And the third-biggest is WeWork, which leases 117,000 square feet. Analysts have long held concerns that coworking sub-lessees may be more vulnerable than long-term tenants if a recession comes along, and WeWork has looked especially vulnerable lately after suspending its IPO in September and ousting its embattled CEO, Adam Neumann.

Still, occupancy remains at 87.2 percent for the time being, in line with the 20-year average for the property. Last year, Beacon earned $41 million in effective gross income from the property, taking home $24.7 million after expenses.

The building’s slightly whimsical arched roof, designed by architect Philip Johnson, helps set it apart amidst Denver’s skyline — but ironically, the shape is particularly ill-suited to a mile-high climate. According to Confluence Denver, a newsletter in the city, Johnson initially designed the building for a different commission he was working on, in Houston.

When the design wound up in Denver instead, engineers found that the slick rooftop could present a hazard to pedestrians below if snow accumulated and then tumbled down nearly 700 feet to the sidewalk. To head off that risk, there are heaters installed below the roof to try to prevent snow from sticking there in the first place.

Representatives from Beacon and from Morgan Stanley didn’t immediately respond to inquiries.