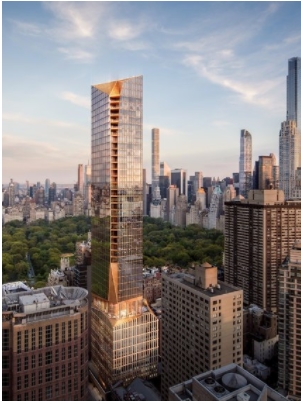 The group suing to kill Extell Development’s planned 775-foot-tall Upper West Side luxury residential tower has been “secretively” continuing its case against the development, despite agreeing on a settlement with the developer, a new lawsuit claims.

Lawyers for Gary Barnett’s Extell filed a suit on Christmas Eve against the nonprofit City Club of New York — which has been trying to halt construction of 50 West 66th Street over alleged zoning violations — blasting the organization for conceding to drop its case against the project for a $300,000 settlement payment, yet still moving forward with it.

SEE ALSO: Brooklyn’s Office Market Post-COVID Sows Green Shoots
The City Club’s decision to secretively try to gain more information about how its appeal might be received, and then subsequent decision to renege on the agreement it had reached, is “improper,” a spokeswoman for Extell said in a statement. “We believe in the importance of honoring a commitment, and City Club should not be permitted to cause additional litigation costs and drag out its meritless challenge to this project.”

Extell claims in the suit that it orally reached a settlement with City Club — it just needed to be signed — but the City Club later said the parties were only “close to an agreement,” according to the suit.

“This is a frivolous claim and I am confident it will be dismissed shortly,” Richard Emery, City Club’s lawyer in the latest suit, said in a statement. “No one agreed at any point on behalf of the City Club that the dispute was settled.”

John Low-Beer, the lawyer who has been representing City Club in its previous legal proceedings against Extell, told Commercial Observer that Extell’s new suit was “totally baseless” and they never agreed upon the settlement.

“It’s a SLAPP [strategic lawsuit against public participation] suit,” Low-Beer said. “We didn’t have an agreement and the board decided not to settle. There were discussions but they never were concluded.”

A spokesperson for Extell did not immediately respond to a request for comment.

“Extell’s building is hundreds of feet taller than allowed in the Special Lincoln Square District, driven by greed and the desire to build ever-higher apartments with commanding views and higher prices,” according to the original suit. “The zoning violations are blatant.”

In September, the New York City Board of Standards and Appeals (BSA) ruled against the City Club’s challenges to the project but opened up a review of 50 West 66th Street use of mechanical floor spaces that could continue to hold up the project, Crain’s New York Business reported. According to the new suit, the City Club planned to file an appeal against the BSA’s decision and revoke the zoning permits.

However, Extell argued the parties reached an agreement that the City Club would still file the appeal — so no other group would file one against the project — then “voluntarily dismiss” it after “it was clear that no other [appeal] proceeding was timely commenced.”

“In violation of that agreement, City Club instead began secretively pressing forward with its [appeal] and, upon obtaining what it perceived to be a favorable reception from the Court,” the suit claims. “[City Club] sheepishly informed [Extell] that ‘in light of changed circumstances,’ it was ‘reconsidering whether it wishes to settle this matter at all.’ ”

Extell originally announced plans for the 69-story residential 50 West 66th Street in 2017, the New York Times reported. Plans call for 127 condominiums units with an outdoor terrace on the 16th floor that would have a garden and a swimming pool.

Updated: This post was updated to add a comment from Extell and City Club’s lawyer Richard Emery.