Why Do CMBS Deals Come in Bunches? 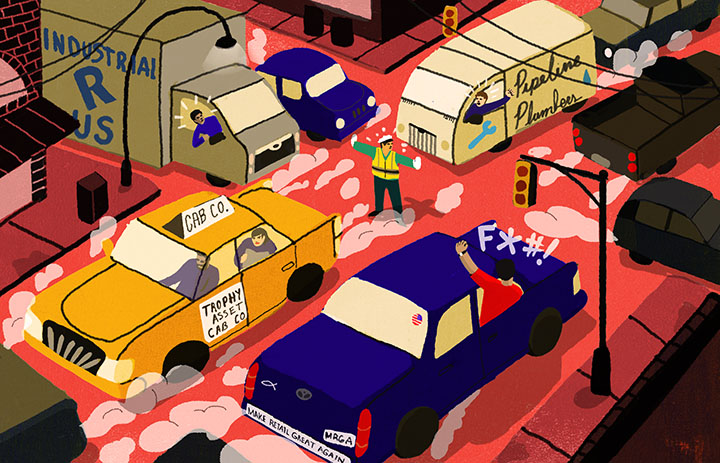 They’ve been coming in hot and heavy.

Like jumbo jets lining up to land during rush hour at JFK, or the Lincoln Tunnel at peak traffic, new CMBS conduits have been hitting the capital markets fast and furious in recent weeks, the result of borrowers having clamored for timely refinancing a few months earlier, in late summer.

The resulting coordination problem — a sudden rush to the market — is a welcome challenge to CMBS executives like Credit Suisse’s Matthew Masso and Stefanos Arethas. Nimbly positioning Credit Suisse CMBS deals amidst a crowded market is their bread and butter.

“Air traffic control is a pretty good metaphor,” Arethas said one day last month, amidst one of the busiest periods of CMBS issuance in recent memory. In November, eight separate private-label CMBS deals hit the streets — a few of which were scheduled to trickle in after this article went to press. (None from Credit Suisse, although the newest deal the bank has helmed, CSAIL 2019-C18, is expected to land next week, as per data from CMBS research firm Trepp.) That’s almost one deal every other business day all month long, after kicking out Thanksgiving and Veterans Day.

That activity is notable because even during the frenetic late stages of the current 10-year real estate bull market, the arrival of new CMBS conduits has hardly been a sustained volley. Instead, the deals this year have come in concentrated spurts.

For the 28 days between August 28 and September 25, for instance, not a single conduit hit the wires. And an even longer interlude elapsed around New Year’s Day 2019: Banks didn’t offer investors any conduit bonds between Dec. 28, 2018, and Valentine’s Day this year. Yet that dry spell followed a fertile stretch between last Thanksgiving and Christmastime, when 10 deals hit the market in a month.

It’s not a pattern issuers strive for. From a CMBS banker’s perspective, the ideal scenario is the very opposite of hauling a deal to a crowded trading floor. When a conduit lands during lulls in the calendar, potential investors are able to give the prospectus their full attention, instead of drowning under a pile of bond offers.

“In an ideal world, you’d be out there on your own, because you get more investor focus,” Masso said. “If an investor has to look at five deals in the same week, it’s tougher for them.”

But firms’ individual incentives make a slow and steady drip from the CMBS pipeline an utter pipe dream.

The biggest driver of a cluttered issuance calendar is simple: the pressure banks face to issue conduits as soon after origination as possible.

“We move as quickly as we possibly can,” said Kara McShane, the head of structured real estate at Wells Fargo. (Last month, the bank announced McShane will be promoted to its overall head of commercial real estate in February.) “We absolutely have the view that velocity is the best hedge.”

That motive means that the conduit calendar is largely driven not by banks, but by borrowers. If market conditions drive scores of landlords clamoring for a refinance all at once, look for a spike in conduit issuance two or three months down the line.

“You don’t come into the year and say, ‘I’ll want to do a deal in February, April, July and September,’ ” Masso said. “It’s really driven by when the loans end up closing along the way.”

Of course, the questions of when landlords seek refinancings from CMBS is strongly determined by when their previous mortgages come due — which reaches back to the timing of whenever their prior three-, five-, seven- or 10-year CMBS loan hit the tape. But to the extent that borrowers retain the flexibility to refinance early, or to bring a given property before CMBS lenders for the first time, financial incentives will influence their schedule.

Understanding the issuance calendar, therefore, requires putting yourself in the shoes of the underlying loans’ sponsors. One force behind the recent issuance surge, for instance, can be traced back to August, when benchmark rates fell to new depths: Early that month, the one-year Libor sank below 2 percent for the first time since the end of 2017. In the spring, it was 50 basis points higher.

That encouraged borrowers to spring from the sidelines and close the refinancings that went on to populate November’s surge of conduits.

“You have to really get into the psychology of what the borrowers are thinking,” McShane said. “Sometimes you see a rate drop, but you don’t see a corresponding pick-up in volume because the borrower thinks rates are going to drop even further.” Other times, she added, activity increases as interest rates rise, because landlords fear that loans will get more and more expensive.

Selling conduit bonds as quickly as possible appeals to borrowers because holding CMBS loans on their balance sheets isn’t especially accretive, one source told Commercial Observer. And the annals of the market’s two-decade history reveal that waiting too long to pull the trigger can carry significant risks.

If a sudden shock brings the issuance market to a halt before banks have unloaded their conduit loans, it’s akin to their being caught with their pants down.

The 2008 financial crisis stands out as one of the industry’s most dire moments. But another scare hit much more recently, when oil prices plummeted at the beginning of 2016. Fears that energy-industry companies would default on corporate debt reverberated en masse through the capital markets. Commercial real estate credit spreads widened abruptly as a result.

If anything, hiccups like that may have only grown more dangerous for CMBS issuers, because they’re less equipped now to buy insurance against the downside.

Banks are interested in removing as much risk from the issuance equation as possible. One problem they’d prefer to avoid is the worry that benchmark interest rates will move against them before they’re able to issue a conduit. That’s fairly straightforward, issuance executives said, because there’s a robust market for derivatives that banks can use to zero-out their exposure to moving rates.

Properly used, those hedging tools should protect banks such as Wells Fargo from every dollar of interest-rate risk, according to issuance executives.

But a far bigger challenge is quashing the risk that credit spreads — the difference between a loan agreed-upon interest rate and the underlying benchmark — will move against the borrower. Before the financial crisis, issuers could counteract that risk by buying derivatives tied to an index that was well suited for the purpose. But the index was sponsored by Lehman Brothers, and no great alternative has emerged since that company’s collapse.

“It’s different now than pre-crisis, when we had very well-correlated hedging instruments like the total return swap market where we could effectively hedge credit spread risk and protect profit margins,” McShane said. “Now the hedging tools that are available like CMBX are not very well correlated. That’s why people move the risk as fast as they possibly can.”

The new paradigm creates both challenges and opportunities for CMBS borrowers, according to Daniel Lisser, a capital markets advisor at Marcus & Millichap. On the negative side, CMBS lenders’ anxiety about credit-spread risk makes them reluctant to let borrowers lock in an interest rate until late in the origination process, which can drive a landlord crazy if he’s trying to, say, buy a building.

“Certainly, one of the bad things about CMBS is that you don’t rate-lock until late in the process,” Lisser said. “If you’re doing an acquisition, it could potentially come back and bite you. You thought you were paying 4 percent, but then it’s 4.25 percent.”

The problem arises in part because while big banks have the sophistication to hedge against movement in benchmark rates, landlords don’t have the same toolbox. The challenge is anything but hypothetical.

“Over the last three months, the 10-year Treasury rate has ranged from 1.4-something to 1.9-something,” Lisser said. “You’re talking a 33 percent change in the risk-free rate.”

On the other hand, issuers’ incentives can also create excellent opportunities for borrowers to take advantage of the ebbs and flows of the CMBS pipeline. To ensure rating agencies give conduits their seal of approval, and to whet the appetites of bond buyers, issuers must keep conduit pools diverse, complete with a wide range of loans covering multiple asset classes. If a bank is all set to issue a pool but is desperately short on multifamily loans, for example, its executives might be able to entice apartment landlords with discounts on quick refis.

“They’ll reach out to us and say, ‘We’ve just had a portfolio-management meeting and we’re light on this product type,’ ” Lisser said. As a result, Lisser said he can be “much more aggressive” negotiating terms for loans that fall into that asset class.

The recent busy stretch will almost certainly come to a halt around Christmas. The holiday marks the beginning of a lull that typically stretches until the Commercial Real Estate Finance Council’s annual conference in Miami, which companies like to use to gauge market sentiment before coming to market. No one wants to offer mortgage bonds in the intervening weeks, when there’s a good chance any potential buyer is skiing in the Alps or lounging on a tropical beach.

“There may be a valid reason why no one’s in the market” during that stretch, Arethas said. “On Dec. 26, I don’t want to be out there alone.”