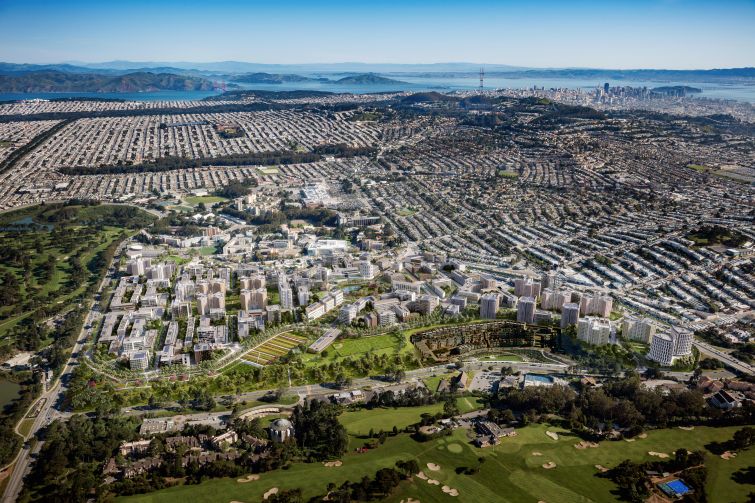 San Francisco’s largest multifamily complex, the 3,221-unit Parkmerced, has been financed with roughly $1.5 billion in CMBS debt from Barclays and Citi, according to rating agencies that analyzed the transaction. AIMCO, a publicly traded real estate investment trust, is providing $275 million in mezzanine debt.

The financing was provided to San Francisco-based Maximus Real Estate Partners, which officially acquired the behemoth community in the fall of 2011. The loan will refinance roughly $1.6 billion in existing debt, the bulk of which was previously used to acquire the asset.

Barclays, acting as the lead-left book runner in the deal, and Citi split the $1.5 billion portion of the loan package, $955 million of which — $247 million in senior A-notes and $708 million of subordinate B-notes — will make up the MRCD 2019-PARK single-borrower commercial mortgage-backed securities (CMBS) transaction. The whole loan closed on Nov. 26.

Outside of this securitization, the remaining debt from Barclays and Citi includes additional A-notes, totaling $300 million, that will be included in one or more future CMBS deals and also $245 million in subordinate C-notes that will eventually be securitized in MRCD 2019-PRKC, according to analysis from Kroll Bond Rating Agency (KBRA).

Subordinate to the $1.5 billion originated by Barclays and Citi is the $275 million in fixed-rate, interest-only mezzanine debt provided by AIMCO, according to KBRA. The five-year mezz loan pays interest at an annualized rate of 10 percent. As part of this deal, AIMCO has picked up a 10-year option to acquire a 30 percent interest in the development, with an exercise price of just $1 million.

Patrick Hanlon, a principal at New York-based brokerage Ackman-Ziff, helped lead the arrangement of the financing on behalf of Maximus; this marks the fourth time that the firm has been involved in the capitalization of the complex, totaling around $4 billion in total financing. Cushman & Wakefield brokerage heavyweights Doug Harmon and Adam Spies also advised Maximus in the transaction, making this deal the fifth time in the last 20 years that they’ve advised on the property.

“It’s kind of like ‘mezzquity,’” Hanlon quipped about AIMCO’s mezzanine position. “When the tax and equity and debt structure was considered, that’s what worked best for them. At the end of the day, you’d think they’d exercise [their option]. And as for the [property] itself, you have a highly cash flowing deal where, as the mezz behind the $1.5 billion, they’ll suck up all that cash flow. Everyone in the [capital] stack will benefit from the cash flow increases. AIMCO will wind up with a really nice position in a proven asset and through their option can get involved in the construction long term.” Hanlon highlighted that Parkmerced’s net-operating-income has more than doubled over the last decade to over $60 million.

Constructed between 1944 and 1951 by MetLife, the rent-controlled complex sits on 152 acres at 3711 19th Avenue, in the city’s southwestern corner, and it comprises the third-largest neighborhood in San Francisco based on acreage, according to Fitch Ratings. The property borders San Francisco State University and is also near the Stonestown Galleria shopping mall.

The complex currently spans over 3 million square feet and comprises 11 13-story high-rise towers, consisting of 1,683 units, as well as 1,482 units spread throughout 154 two-story, garden-style townhouse properties. As of September 2019, the complex is just over 94 percent leased, just under the 96.1 percent occupancy rate the submarket registered in the third quarter, according to KBRA analysis. According to rating agency analysis, the complex features the right to build over 7,000 new residential units.

This recapitalization paves the way for Phase 1 of a plan that Maximus will undergo to redevelop all the town home units and revitalize and transform the community into a bustling neighborhood complete with nearly 10,000 residences, 80,000 square feet of office space, 230,000 square feet of retail, a new elementary school and 64,000 square feet of amenities, according to a release from Maximus, detailing the financing and its plans for the site going forward. Phase 1 will include the construction of 2,000 new apartments.

“We will now be able to build nearly 2,000 new homes in the next few years – a huge delivery of new housing at a time when San Francisco desperately needs it,” Maximus founder Robert Rosania said in a prepared statement.

“[Parkmerced] is the Peter Cooper Village/ Stuyvesant Town of San Francisco,” Hanlon said. “The complexity arises around financing it and then overtime having to knock down those units and put in replacement units.”

Maximus had acquired the property from Stellar Management and Rockpoint Group — who bought the asset in 2005 — for $1.4 billion in November 2011, according to the rating agency information and a report by MultiHousing News. Maximus funded its purchase with a $450 million first mortgage loan from Ladder Capital — secured in LCCM 2014-PKMD — and $773 million in mezz debt from The Children’s Investment Fund.

Maximus was founded in 2012 by Rosania, a former CEO of Stellar who started in the role in 2005 and eventually spun off from Larry Gluck’s shop. Two former Stellar executives, led by Rosania, created Maximus and have been involved in the ownership of Parkmerced since 2005, while at Stellar. Maximus has directly managed the property since late 2015, and since that time, it’s pumped into the complex just over $40 million in capital expenditures.

Amenities at the site can be found divided among 10 buildings dedicated to common areas — such as laundry facilities for the townhouses — and administrative uses. The main clubhouse building on the complex includes a leasing office, a fitness center, a business center and a club or lounge area, with a kitchen. There’s also a fitness center and a laundry room located within each apartment tower.

Around the complex are several playgrounds and bocce courts, and there is also a school at the center of the grounds that uses a Montessori-style approach to teaching, according to KBRA.

Overall, there are just over 2,500 resident parking spaces, 1,021 of which are located within a single garage building, while another 1,418 are covered car port spaces and 63 are reserved parking spaces situated on private streets. Residents are also able to use open street parking available throughout the property.

The property and neighborhood is located in the Lakeshore area, bordering the Pacific Ocean. To the north, it sits across the street from SF State, so around 17 percent of its resident population are students, according to KBRA. Bordering the southern and southwest edges of the site, respectively, are the San Francisco Golf Club and The Olympic Club, the oldest athletic club in the U.S. and the home of a popular, 45-hole golf course that’s hosted major PGA Tour golf events such as the U.S. Open and the Tour Championship. Lake Merced Park is adjacent west of the complex.

This story was updated to include the brokerage contributions of Cushman & Wakefield and Ackman-Ziff as well as to include comments from Ackman-Ziff principal Patrick Hanlon and Maximus founder Robert Rosania. The story has also been updated since publication to reflect that Barclays was the lead-left book runner on the CMBS transaction.