The online giant takes a page out of the book, err catalogue, of department stores with its inaugural fashion mailer 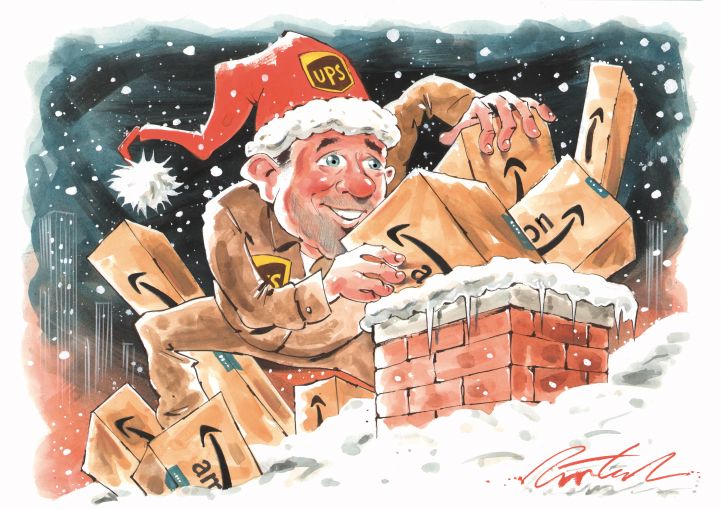 Amazon takes a page out of the book — err catalogue — of fashion retailers for the holidays. Illustration: Russ Tudor for Commercial Observer

Flipping through the pages of artfully arranged jewelry and warm winter coats, a casual shopper might mistake the offerings as those from, say, a Bloomingdale’s or Neiman Marcus.

But it wasn’t a department store mailer that hit homeowners’ mailboxes in November. It was a catalogue — that old-timey marketing tool synonymous with Sears, Roebuck & Co. — from the 100-pound gorilla of modern retail, Amazon. It seems that the company, which has upended consumer spending through its pursuit of all things digital, is going back to the basics.

“It’s interesting, it’s kind of like the contrarian play in terms of doing something that’s out of the norm,” said Thomas Dobrowski, a New York-based vice chairman of Newmark Knight Frank. “It gets people talking and there’s buzz around it; that’s kind of the name of the game.”

The company’s “Holiday Together” mailer featured fashion items ranging from Amazon Essentials flannel shirts to Hugo Boss cologne and Crocs kids’ rain boots. The catalogue’s 64 pages featured spreads of revelers in sparkly cocktail attire and the obligatory shot of a family in matching PJs gathered around the Christmas tree.

“It’s more like a context of what used to be a Lord and Taylor’s or a Bloomingdale’s catalogue kind of thing,” said Kate Newlin, principal at her eponymous New York-based retail consulting firm. “But here you’re bridging, you’re giving it a new context: Amazon fashion.”

It’s an expansion of the retailer’s mailer strategy, where it tested the water last holiday season by releasing an inaugural toy catalogue. Amazon rolled out another toy brochure this year and expanded into the fashion segment — long considered one of the last frontiers for online retailers because many customers still prefer to try on items at brick-and-mortar stores.

“What the catalogue is giving you is a portal into fashion that you might not, on your own, go look up: ‘winter coats Amazon,’ ” Newlin said. “That’s not a native behavior yet, and so they’re educating us on making it a new pattern. Just the way we didn’t know there was a thing called Prime, and it changed our behavior.”

To be sure, Amazon’s strategy involves a touch of tech. This isn’t your grandmother’s catalogue, after all.

For starters, there are no prices listed. Customers are instead directed to view the item on the Amazon app through a QR code. For example, snapping a code printed on a women’s partywear page leads to a list of items — a hodgepodge of sequined skirts, leather clutches, and cashmere sweaters — with their accompanying prices, ratings, and Prime shipping status.

“If you see something and you like it, you can buy it within five seconds — that’s interesting,” Dobrowski said.

The absent pricing sharply diverges from many department stores, which are often fixated on advertising the lowest price and offering discounts, Newlin said. (“[They send] mailers that say, ‘50 percent off! If you buy right this minute!’ You know, like they’re showing the flop sweat of retail.”)

The move to exclude prices appears to stem from Amazon’s fluctuating prices, which makes it dicey to specify a price tag or a ballpark figure. Plus, there’s likely a desire to get shoppers to the Amazon platform, where they can be shepherded towards new products, Newlin said.

“Their algorithm, if you like this, is going to show you 12 others in 47 colors and on and on and on,” she said. “There’s an infinity of choices.”

The catalogue’s product mix runs everywhere from exclusive offerings, like Amazon-produced fleece jackets, to more run-of-the-mill products, like Wrangler men’s jeans, that a customer could also find at, say, a Macy’s or a JCPenney.

The mix makes sense as customers are gravitating away from department stores, especially those in the mid-tier, with their confusing jumble of products and brands, and towards direct-to-consumer offerings and retailers’ own stores, Dobrowski said.

“You walk into a Macy’s and you don’t know where to start, right?” he said. “There’s a stigma that comes along with that, with the younger shopper, where it’s just not cool to buy things in a department store.”

The retailer is also hitting the mark on selling to brand-agnostic consumers. Newlin believes that segment has room to grow as customers move towards valuing “quality at a fair price.”

Page 10 of the catalogue proudly features “#theamazoncoat,” a nondescript, multi-pocketed winter down coat. Amazon had a hit with the jacket, manufactured and sold by Chinese company Orolay, which became an internet sensation after it was cast as a favorite of the Upper East Side socialite crowd.

The coat, priced at around $139 a pop, shows Amazon’s value proposition, Newlin said.

“There’s a kind of a post-branding idea here,” she said. “You trust Amazon; you know it’s going to be fairly priced, and it’s going to arrive, and it’s more than likely going to fit, and it’s enough. Your identity isn’t wired to it.”

Amazon’s attempt to crack the fashion market has also involved launching several in-house fashion labels with names like Scout & Ro and North Eleven, according to a February 2016 report from CNN Business.

The catalogue also features a plug for a photo recognition feature called StyleApp, which Amazon unveiled earlier this year, that takes a photo of a piece of clothing and matches it with a similar item on Amazon (a sort of Shazam for clothes).

There’s another woman that also has a starring role: the company’s virtual assistant, Alexa.

The catalogue plugs the omnipresent voice as a stand-in for a personal shopping assistant. After all, it can help track the flurry of packages (“just ask, ‘Alexa, where’s my stuff?’” the catalogue advises) that, in olden days, would have been shoved into the trunk of a car.

Or, in Amazon’s digital world, it serves as a stand-in for a friend: “Ask, ‘Alexa, what should I wear?’ for tips on how to take your holiday outfit to the next level.”