Bridge financing isn’t always getting deals across the finish line. The low interest rate environment has borrowers skipping the permanent route in favor of another bridge loan (or two) 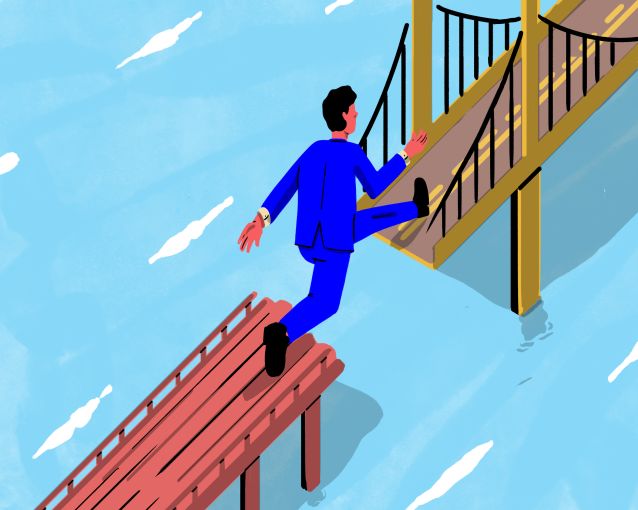 Borrowers are aiming to retire previous bridge debt with fresh, short-term financing, buying time for them to stabilize their assets and maximize their chances of getting more proceeds on a permanent loan down the line. Image: Kevin Whipple/ for Commercial Observer

Late-cycle real estate fundamentals have many borrowers looking to cross the bridge (loan) before they even come to it.

Historically, a low interest rate environment — and today, paired with a lending market flush with capital — would create a desire from borrowers to lock in long-term, permanent financing.

But in many cases, borrowers are wrestling with a climate that includes sluggish leasing fundamentals or the oversupply of multifamily in certain markets. Those borrowers are aiming to retire previous bridge debt with fresh, short-term financing — whether it be with mini-perm loans or more bridge debt — buying time for them to stabilize properties and increase their chances of getting higher proceeds on an eventual permanent loan down the line.

Still, Emerald Creek Capital managing director Jeff Seidler said that “if borrowers can achieve permanent loans, that’s the best option … But many aren’t able to achieve that as the permanent loans that are being done are because of the low interest rate environment. If someone can achieve perm financing, it makes sense; it’s just whether the collateral is eligible for perm.”

Many of the lenders featured in the pages of this magazine also agreed, via their written statements in response to a Commercial Observer questionnaire, that the demand for bridge debt is evolving.

When it comes to the projects that are eligible for long-term financing, lenders seem to be less concerned about the sponsorship and more about the quality and position of the collateral. Major multinational institutional lenders like Wells Fargo and J.P. Morgan Chase continue to see hefty volume in permanent loan requests, but generally, borrowers are confident about the idea that rates aren’t going to move up any time soon and are just biding their time.

“We focus on institutional owners of real estate who are generally conservative from a leverage perspective,” Matt Salem, a director and co-head of real estate credit at private equity firm KKR, said in his statement. “They are mostly focused on increasing the time available to implement their strategy by either extending the initial base term or maturity date.”

The bridge and permanent market remain extremely active, “given the amount of dry powder that needs to be put to work in real estate opportunity funds, as well as the low rate environment,” said Apollo Global Management senior partner and global head of commercial real estate debt Scott Weiner in his statement. Overall, commercial real estate lending volume from CMBS lenders (52 percent), commercial banks (44 percent) and life companies (6 percent) climbed remarkably on the year in the third quarter, according to a recent report from the Mortgage Bankers Association.

In September, the Federal Reserve, concerned about slowing growth, cut benchmark rates by 25 basis points — the second time this year it had cut rates — which left many lenders pleading for Jerome Powell to not slice too quickly. The Fed raised rates four times in 2018, which some lenders said sent many borrowers racing for permanent loans.

“After last year’s rate hikes, borrowers were thinking, ‘rates are going to go up, so we have to lock in permanent financing now,’ and that phenomenon has reversed. The new sentiment is interest rates are going to be lower for longer,” TPG Real Estate Finance Trust president and CEO Greta Guggenheim told Commercial Observer.

Guggenheim added that borrowers moving away from coveting permanent debt is mostly driven by “whether [a] project is stabilized…Borrowers don’t want to walk into a long term loan if they think their net operating income will move up significantly; they would be leaving proceeds on the table and encumbering the property with longer term fixed-rate debt. Good projects in good markets, with good borrowers, are getting refinanced, even if it’s a bridge-to-bridge [refinance].”

“However, most of these financing requests are being originated by non-bank lenders,” Park added in the statement. “We’ve also seen the development pipeline slow, which we view as a good thing. In the last cycle there was a lot of overbuilding. You just don’t see that today.”

Even so, the bridge-to-bridge route is mostly concentrated in the areas of new construction or repositionings, where progress in executing on certain aspects of a project might lag behind others.

“In the bridge environment a couple years ago … it was borrowers who didn’t want to take a chance going a conventional route and wanted to use a lender with a lack of a prepayment penalty and more flexibility,” Seidler said. “In today’s market, bridge loans are required to be for more value-add, ranging from light value-add to a full new build.”

Seidler added that he’s seeing “the mini-perm-to-a-perm-type product, if a property is in lease-up mode, for example, seeing a building where residential is leased but maybe the retail is still behind … [in new construction], people I talk to are writing longer term loans to make sure they are properly allocating for [changes]. I haven’t seen many lenders applying dramatic pressure on people, and there aren’t a lot of foreclosures on the completion side. So, when borrowers know they’re going to be running out of interest reserves or have cost overruns, they reach out ahead of time.”

Despite the late-cycle climate, borrowers are still developing, to the surprise of many lenders. But, in turn, many banks are answering the calls for construction debt, throwing their hats in the ring on a recourse basis, competing with the non-bank lenders who more recently have been the flexible option borrowers have raced to.

Anthony Wong, a senior vice president and head of U.S. commercial real estate lending at Bank of China, said in his statement that the bank has seen a rise in both bridge and permanent loan requests over the last 12 to 18 months. “The low-hanging fruit — stabilized, well-leased income producing properties — have historically been and will continue to be financed by long-term fixed-rate lenders such as life insurance companies, CMBS and agency lenders,” he said. “Loan requests for commercial banks have been lopsided toward transitional, value-add assets looking for floating-rate, shorter term financing. We are also getting inbound inquiries for construction financing even at this point of the cycle.”

“The biggest change [we’ve] observed over the past two years involves requests for take-out financing prior to a construction project receiving [a temporary certificate of occupancy] or being fully leased,” Wong added. “Historically, the financing narrative for construction projects included a construction loan phase to build the project, followed by a mini-perm phase for stabilization. The permanent loan phase would take out the mini-perm with a higher loan amount.”

Wong said that in today’s market, the mini-perm phase is mostly being skipped. “Some borrowers want to refinance a construction loan with higher proceeds as soon as possible, prior to project completion or stabilization,” he said.

Guggenheim noted that business plans’ progress has been slowing of late, and “there’s a lot of new supply that has caused delays in lease ups of newly built projects…I think getting to stabilized debt yields has been more difficult, but that doesn’t mean there will be credit impairment; projects just need more time to stabilize.”

The bridge and permanent markets are hot and highly competitive, from Park’s perspective. “You have CMBS lenders, life insurance companies, debt funds, banks,” he said, adding that there’s a lot of capital available and rates are low, so, “from a borrower’s perspective, they see this and believe it’s a good time to lock in a long-term deal.”

Chad Tredway, J.P. Morgan Chase’s group head and managing director for real estate banking, said in his statement that given where interest rates are currently, the bank’s clients are “looking to finance their projects for longer; seven- to 10-year loans are more common today.”

Wells Fargo managing director Kara McShane concurred in her statement, saying, “given where rates are; if you can term out in this rate environment, you should.” She said Wells has been seeing more requests for “larger, longer term, fixed-rate loans as investors aim to lock in low rates.”

“I don’t see anything unusual happening, where borrowers who should refinance with permanent debt aren’t getting it,” Guggenheim said. “If borrowers are achieving their business plan, and are a long-term-hold investor, they will generally lock in a long-term financing. However, they aren’t as hurried to do it because no one thinks rates are shooting up anytime soon.”

But, seemingly now more so than previously experienced, and because many borrowers are laboring to meet the timelines of their business plans, Madison Realty Capital co-founder and principal Josh Zegen told CO in his response, “there’s more of a need for active management and proactively working with borrowers … But I believe we’ll see an uptick in loan sales in 2020.”

“Certainly you have to be commercial as a lender,” Guggenheim said. “With transitional loans and construction loans, things never happen exactly like you underwrote. Borrowers need a lender who can quickly respond to loan modification requests and gauge whether it impacts credit or not. Lenders need to accommodate borrowers if credit is not impacted. Borrowers want a lender with an investment mindset, who actively oversees the asset managers.”

Floating-rate lenders have also expressed concern over compressed spreads and an ever-lowering Libor floor, which would create a scenario where they’ll have less protection against further dips in rates; with Libor floors being more heavily negotiated, many of these lenders are also finding that they’re often having to more seriously negotiate non-recourse carve-out guarantor covenants with borrowers.