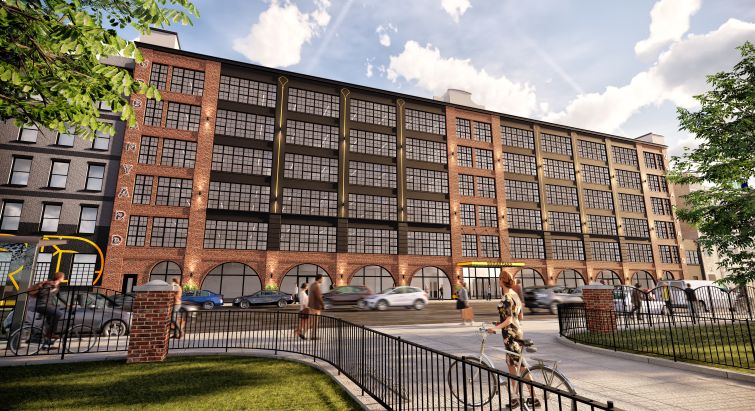 Six warehouses in Long Island City are being clad with brick and converted to office space for a project called "Urban Yard." Rendering: Input Creative Studio 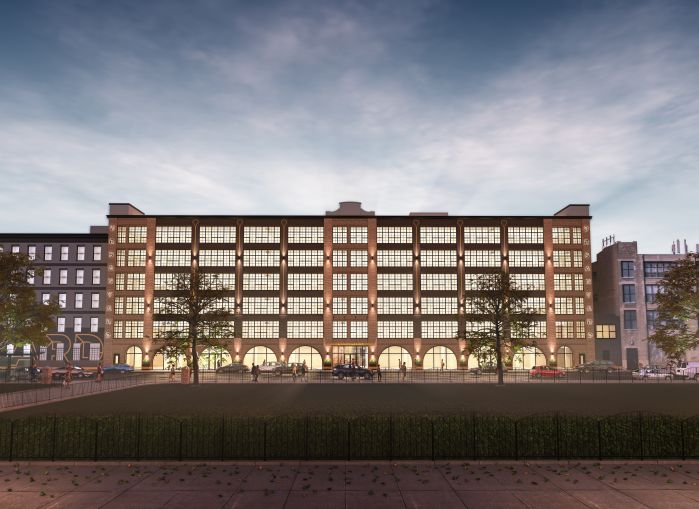 The warehouses will be combined into three office buildings joined by a common interior courtyard, shared basement space with a fitness center and bike parking, and a roof deck. Rendering: Input Creative Studio 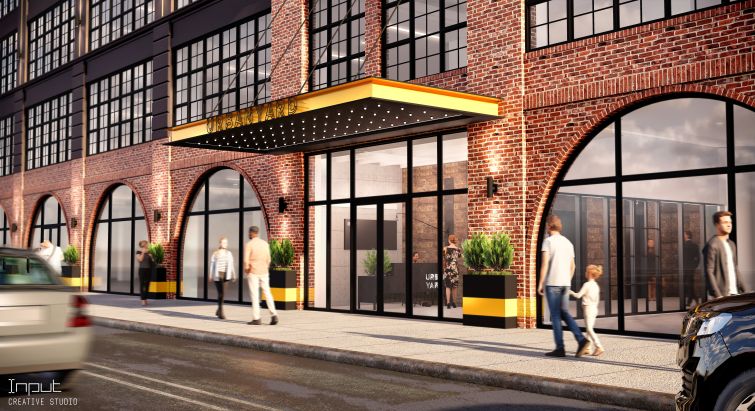 The buildings will also get a new central lobby with an industrial vibe. Rendering: Input Creative Studio 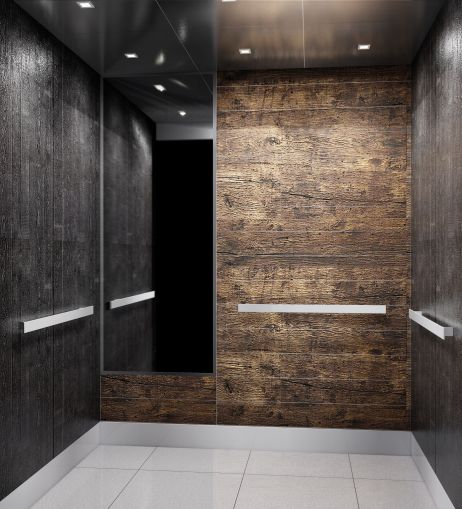 A collection of decaying warehouses across from Queensbridge Houses in Long Island City is about to get new life as an office project with a central yard linking all the buildings.

The development, appropriately dubbed “Urban Yard,” will shortly launch leasing for office tenants. Its first phase, which includes the first of six buildings, will encompass 87,000 square feet at 40-09 21st Street, right next to the 21st Street-Queensbridge F train stop.

The six-story industrial building will get a new, partially red-brick facade, a bike room and fitness center. The new owner, Elms Realty Corp., is also opening up the ground floor with large, arched doorways, which will be glassed in for 9,000 square feet of new retail and a new lobby.

Architect Yiannos Vrousgos of Input Creative Studio, who designed the renovation, said that he “tried to create a brand-new facade, and maintain some of the detailing but get rid of the stucco.” He added that they added the archways “to make it more human scale. We tried to create a much better dialogue between the streetscape and the actual building.”

The structure, which fronts an entire block on 21st Street between 40th and 41st Avenues, is also being outfitted with new utilities, large gridded windows, and new heating and cooling systems. While the full, 400,000-square-foot development is expected to take three years, phase one will be ready for tenants next spring.

The collection of six warehouses will be recombined into three buildings as part of the renovation, and the U-shaped campus will be united by a common basement, underground parking lot and the shared interior green space. The lawn will be created by demolishing a small wooden structure that juts into the interior courtyard and then decking between the warehouses to create a flat surface. The decking is necessary because the courtyard currently slopes down to allow for parking, which will remain in some form, and the shared yard will be constructed on top.

The second phase will incorporate a roof deck with a lawn and seating, and work will begin on it sometime next year.

Ryan Gessin, Jordan Gosin and Bernard Weitzman of Newmark Knight Frank are marketing the buildings and hope to get rents in the mid-$30s per square foot. They expect to attract tenants from universities, public agencies, schools and nonprofit social service organizations. Those sectors of the leasing market “are on fire right now” in western Queens, said Gessin. “Unlike some parts of Brooklyn, this really is one of the closest places to Grand Central,” the broker explained. “And more importantly the residential infrastructure has exploded so much that schools, health care and government are all expanding to service the residential population.” He pointed out that the Floating Hospital is relocating from a couple blocks away in Queensboro Plaza to the corner opposite Urban Yard. And there are three hotels under construction on the next block, one of which is being developed by prolific hotel builder Sam Chang.