Trez Forman Makes a Splash With $115M Loan in Greenville 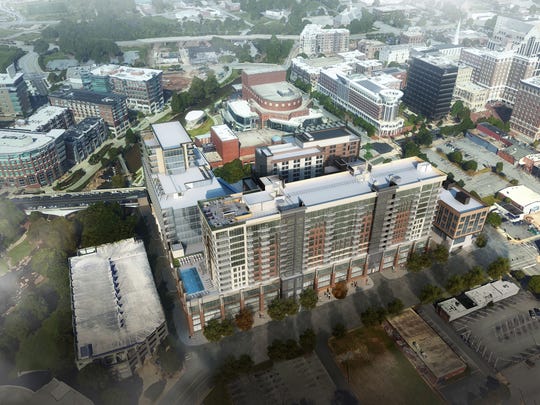 Centennial American Properties has pinned down a $115M loan from Trez Forman Capital to back continuing construction at a large mixed-use development in Greenville, S.C., the Palm Beach, Fla.-based lender announced today.

The three-year deal, which closed on Friday, represents Trez Forman’s largest ever commercial real estate loan — and holds the same place of honor for the lender’s two parent companies, Forman Capital and Canada’s Trez Capital Group. The debt will fund the remaining work on Camperdown Square, a more than 3-acre development in the metro area of approximately 907,000 halfway between Charlotte, N.C. and Atlanta.

When finished, the project, at the intersection of South Main and Broad Streets, will comprise a 17-story office building with almost 34,000 square feet of retail, a 217-apartment multifamily building and an AC Marriott hotel with 217 rooms. Trez’s loan is attached only to the office building and to the retail portion of the residential building; the hotel has already been sold off to Auro Hotels, a Greenville-based company that will operate the lodging.

The step-up in scale for Trez Forman came through good word of mouth, as per Brett Forman, the lender’s CEO.

“We’d made a $75 million loan in Orlando, which at the time was the largest loan we’d done,” Forman said. “Our borrower in that deal was pretty pleased with the execution, and actually referred [us to] his friends who were the equity in this deal. It was a good fit.”

Centennial American’s other projects include a handful of other office and mixed-use projects in Greenville, including an office-and-retail development adjacent to the stadium where Minor League Baseball’s Greenville Drive play home games. It’s also built a 500,000-square-foot shopping center in Brunswick, Ga., a seaside city on the state’s Atlantic coast.

“Trez handled [the Camperdown] transaction more as a partner than as a lender; they understood the issues and worked to create solutions,” C. Brody Glenn, Centennial American’s president, said in a statement.

The Trez Forman-backed office tower is already 40 percent built and has heretofore been funded entirely through equity, Forman said. Work has also already wrapped on the subterranean 600-space parking garage. The Trez Forman CEO said he expects the project’s completion in July 2020.

Though it’s overshadowed as a tourist destination by Atlantic-coast cities such as Charleston, Hilton Head and Myrtle Beach, Greenville has South Carolina’s busiest airport. The city serves as the North American headquarters for Michelin, the French company that’s the world’s second-largest tire maker, and as the global base for Concentrix, a business-services company with nearly 250,000 employees.