The Opportunity Zones in NYC With Breakout Potential 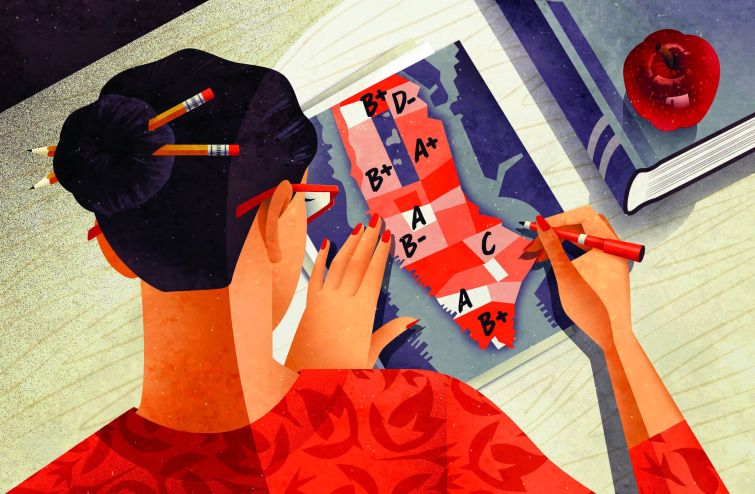 Making the grade in opportunity zones. Illustration by Kevin Fales.

Of the 514 opportunity zones in New York State, more than half are in the five boroughs of New York City. They range from yuppy enclaves in Williamsburg to developing neighborhoods like Bushwick to overlooked areas like Highbridge in the Bronx, where the poverty rate is 36 percent.

The opportunity zone program, passed into law by the Trump administration in 2017, was designed to encourage investment in low-income and underserved areas, and it rewards the investment of capital gains over the long term. The incentives, which include tax deferrals and deductions, step up if the investment is held for five, seven or 10 years.

In New York, the market is experiencing the longest development upcycle in recent memory, so it’s rare to find a site with development potential that’s ignored. That being said, capital tends to flow to the same areas, with everyone in search of the next breakout neighborhood.

The map of census tracts designated as opportunity zones chosen by Governor Andrew Cuomo provides a glimpse into which areas could be crowned with that title. While some are standalone zones, such as a single stretch of Hell’s Kitchen and one slice of the Rockaways, many others extend to whole neighborhoods, including large swaths of Bushwick and Weeksville, almost the entire South Bronx, and chunks of Harlem and Sunset Park.

One thing to look out for is the change in income and housing prices to triangulate where a neighborhood is in terms of growth. And since census tracts are small, the range of income and growth, even within a single neighborhood can be drastically wide. For example, in a cluster of opportunity zones near Gowanus and Red Hook, three of the six sectors had annual household incomes exceeding $91,000 in 2017, a 100 percent increase from 2012. The remaining three, all of which contain NYCHA housing projects, had an average annual income of $33,700, after a 33 percent uptick since 2012.

The takeaway is that when choosing where to invest, the fundamentals remain key, whether or not it’s in an opportunity zone. But the program has brought in additional sources of capital from investors who don’t traditionally invest in real estate.

In addition, said David Schwartz, head of Slate Property Group, the calculation is a little different: “Opportunity zones can lower the cost of capital, so investors can take a lesser return because they get all these tax benefits,” which opens the doors for projects that might not have penciled out otherwise.

After poking through the data, Commercial Observer graded four areas that are of particular interest out of the 306 opportunity zones in New York City: generally, areas that have the right conditions for growth, but haven’t yet peaked.

Broadway Junction sits at the crossroads of five neighborhoods in Brooklyn and six subway lines. Located just past Bushwick and Bed-Stuy, at the far end of the L line, it’s an area that’s poised for growth — and it’s entirely opportunity zoned.

In 2016, under the East New York Neighborhood Plan, the city promised to invest more than $250 million in the area, which includes Broadway Junction. In August of this year, the city put forth its initial plan to revitalize the transit hub and the block surrounding it.

“Brooklyn has been high demand, regardless of opportunity zones,” said Dan Marks of TerraCRG. “[The program] increased the buyer pool, but that doesn’t necessarily reflect on a higher value for that property.” One factor to consider, Marks said, is that condos don’t benefit from the opportunity zone program and in hot areas, a buyer might be outbid by a condo developer. On the other hand, areas that are ripe for rental development, particularly areas that are being rezoned — like East New York or Gowanus — are particularly attractive for opportunity zone capital.

Like Broadway Junction, Jamaica Station in Queens is one of the city’s busiest transit hubs, with several subway lines, the Long Island Rail Road and the JFK AirTrain converging in its yards. And similar to its Brooklyn counterpart, the state has dedicated $380 million to Jamaica Station’s revitalization, and the surrounding neighborhoods recently underwent a rezoning.

While Queens has gotten much more attention for its somewhat questionable opportunity zones in Long Island City — such as the one in which Amazon planned to set up shop — looking further east to the pocket around Jamaica Station is likely a better bet.

Manhattan is never a bad bet, and with just five opportunity zones below 96th Street, any vacant land or potential redevelopment sites are sure to be in high demand.

The zones rope in several portions of the hinterlands of the Lower East Side and East Village, including a slice of the waterfront between the Manhattan and Williamsburg bridges; two areas stretching from Avenue B to Avenue D, one south, and one north of East Houston Street. A fourth zone lies further up the East River near Kips Bay, and the fifth is the farthest west you can get in Hell’s Kitchen.

That last zone deserves special mention. Stretching from Tenth Avenue to the Hudson, and extending from West 50th Street to West 58th Street, it’s only about a dozen blocks north of Hudson Yards, and has seen its own rash of development.

That includes a Rafael Vinoly-designed office tower at 787 11th Avenue, a 100-unit affordable housing project at 540 West 53rd Street, and a 12-story condo building at the former Lexus dealership at 646 11th Avenue.

If you know someone who knows someone, it’s time to cash in that favor.

Basically the entire South Bronx along the waterfront is opportunity zoned, and investing there is almost a no brainer at this point. But might we suggest looking a little further north?

Jason Gold, a broker at Ariel Property Advisors who specializes in Bronx investment sales, says he’s been seeing a lot of interest in opportunity zone sites. “With the rent stabilization laws, which hurt the multifamily market, people are shifting their focus to development sites,” Gold said.

In the North Bronx, there tend to be more industrial sites and larger development sites, both of which are in high demand, said Gold. Two deals that closed since the onset of the program include 3515 Bainbridge Avenue, a public facility near Montefiore Hospital in Norwood, and an industrial building at 1559 Boone Street in Tremont. Both sites had more than 100,000 square feet of buildable space, and both sold for more than the asking price.