The first phase of the marketplace has opened, bringing about 30 vendors to the Lower East Side megadevelopment 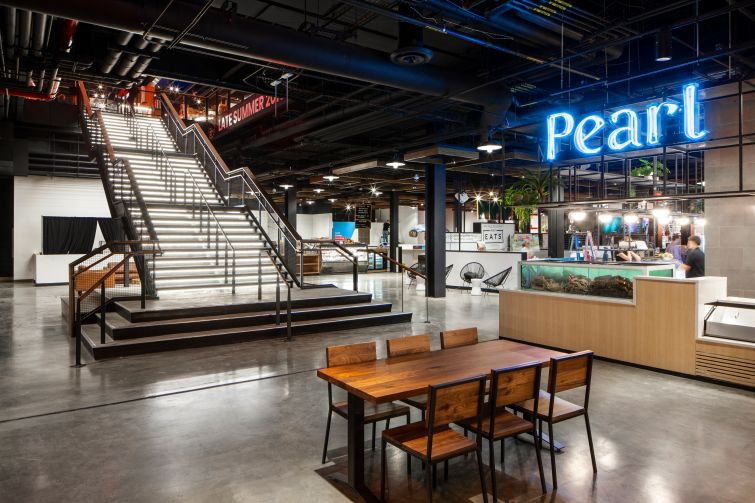 The Market Line has opened at Essex Crossing in the Lower East Side. Photo: QuallsBenson

Essex Crossing is throwing open the doors today on The Market Line, a marketplace and food hall that adds to the Lower East Side development’s already-impressive roster of local restaurants, grocers and vendors.

The opening of the first phase of the project, located one floor down from the historic Essex Market, includes vendors ranging from Doughnut Plant to Tortilleria Nixtamal and Nom Wah. The 35,000-square-foot underground space will also house a stall for the Tenement Museum, which conducts tours of the namesake buildings a few blocks away on Orchard Street.

“Our goal with The Market Line was to create a venue for the community that reflects the Lower East Side’s diverse immigrant food culture and offers a space for small businesses to flourish and expand their audience,” said Rohan Mehra, co-founder of The Prusik Group, one of Essex Crossing’s developers, in prepared remarks.

The opening marks the tip of the iceberg for the Market Line; when completed in 2021, the marketplace will house 100 vendors across 150,000 square feet of space, making it one of the largest such markets in the world.  The first phase houses about 30 vendor stalls, of which 25 are up and running.

Restaurants in the current round of openings include the East Village favorite Veselka, Ippudo‘s quick service ramen joint Kuro-Obi, and Mediterranean spot Rustic Table Shuk. There will be drinks from Peoples Wine Shop and Bar and about 1,200 rotating beers at The Grand Delancey.

Rounding out the offerings are shops like local favorite The Pickle Guys and coffee shop Cafe Grumpy. For the sweet tooth, there’s Indonesian dessert stall Moon Man, artful creations at Rebecca’s Cake Pops and the Brooklyn-based Ample Hills Creamery. Shoppers can also stock up provisions at places like Southeast Asia Food Group, as well as from butchers Ends Meat and the family-run Schaller & Weber.

The market will be open seven-days-a-week, from 7 a.m. until 1 a.m. daily, though the vendors will keep individual hours.

The first phase sits at the base of The Essex, a 26-story apartment and retail tower, that nabbed a $215 million CMBS financing last month. The property’s ground floor houses the 14-screen Regal Essex Crossing and the vendor-based Essex Market, which relocated in May from its longtime, jam-packed home at 120 Essex Street. (One longtime vendor noted business was brisker in the new space, but the spaced-out stalls reduced the level of interaction among the sellers). Essex Market’s grocers and shops include Viva Fruits & Vegetables, Shopsin’s, Cafe D’Avignon and the Lower East Side Girls Club.

Once completed, the Market Line will stretch down three blocks of Broome Street and include things like art galleries and a live music venue. The final layout will function as a subterranean passageway connecting two of the complex’s mixed-use office towers, at 145 and 155 Delancey Streets, which house a combined 350,000 square feet of office space, along with The Essex.

Essex Crossing, when completed in 2024, will be comprised of nine properties totaling 1.9 million square feet. As of October, seven of its nine sites had topped out and the developers anticipate that it will be more than 90 percent complete by 2021, as Commercial Observer reported.

Earlier this month, the New York Times called Essex Crossing the “anti-Hudson Yards,” with its mix of affordable apartments, community perks and the Essex Market.

Update: This story has been updated since publication to correct that Market Line stays open until 1 a.m. nightly.