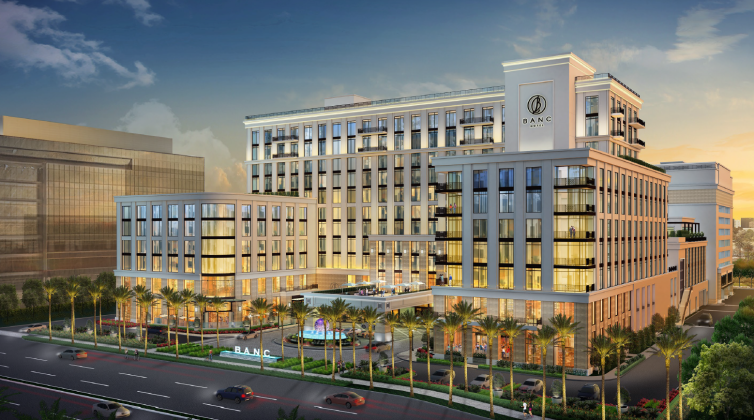 A rendering of the Banc Hotel in Irvine, Calif. Image: Madison Realty Capital

A hotel developer has picked up a $30.5 million financing package led by Madison Realty Capital to buy a building site in Southern California, Commercial Observer can first report.

The financing, extended to developer John deVries, includes a $24.5 million loan from MRC and a preferred equity investment worth $6 million from The Bluestone Group, an opportunistic-investment company based in lower Manhattan.

De Vries is using the funds to buy a site at 18582 Teller Avenue, close to The University of California, Irvine and John Wayne Airport. His company has plans to build a 991,000-square-foot development there, which would include an 11-story hotel and a separate 155,000-square foot commercial building with retail and office tenants. The square footage also seems to include a large adjacent parking garage.

Several previous media reports about the project name de Vries’ development company as HJ Capital, as does paperwork filed with Irvine’s municipal government earlier this year. In an email, De Vries said that the company developing the Banc is actually WGE Capital Group, another company tied to de Vries. He declined to explain the relationship between the companies.

“This transaction represents what we do best – speed, flexibility, and reliable financing for transformative projects nationwide,” MRC’s co-founder, Josh Zegen, said in a statement. “In this case, we had the opportunity to quickly finance a mixed-use development that will fill a substantial hospitality void in the Irvine market.”

“We were able to finance this well-located property at an attractive basis and partnering with MRC allowed for a smooth and quick execution on this deal,” Eli Tabak, a Bluestone Group founder, said in prepared remarks.

The plan has been in the works since the middle of last year, when the developer kicked off the process of winning zoning approval for the project. According to records from an Irvine City Council meeting this spring, the plot was part of an assemblage controlled by Hines, where the national development firm had aimed since before the Great Recession to build a 900,000 mixed-use project of its own.

Those plans never materialized. Instead, de Vries made overtures toward developing the property, winning approval from local lawmakers to make improvements to road that provides access to the site before finalizing the acquisition from Hines.

The Banc, as the hotel will be known, will stand across the street from a new 500,000-square-foot office building developed by Trammell Crow completed last year. WeWork leases part of that building.

Irvine, which began as a railroad town in the 19th century, has become a wealthy community with a thriving business scene. Companies headquartered there range from from fast-food chain In-N-Out Burger to LA Fitness, Meade Instruments — which makes optical tools — and Blizzard Entertainment, a big video game maker.

Update: This story has been updated since publication to include a reference to WGE Capital Group.