Lenders and Brokers Confident About Fundamentals, Immediate Future of CRE 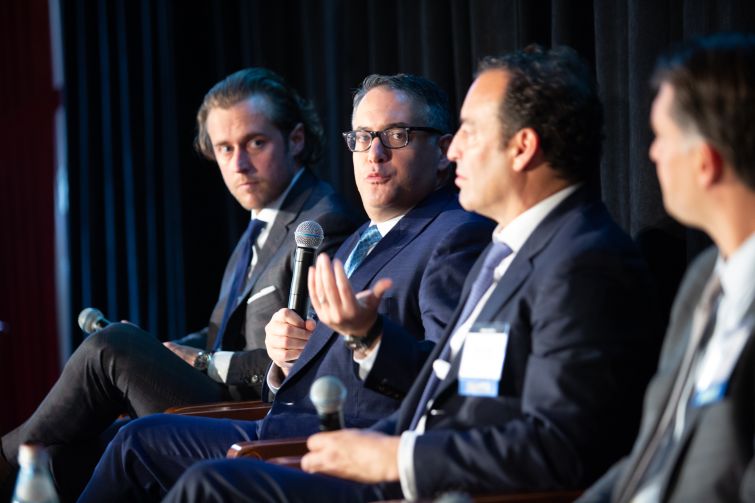 As the capital markets landscape continues to become increasingly intricate and sophisticated with every passing year, lenders and investors have likewise become more nimble and astute, showcasing a heightened sense of discipline when it comes to their respective tolerance for risk.

This has helped create a stable U.S. commercial real estate market that is as formidable as ever, and industry participants are relishing a dynamic playing field.

“All data shows [investments in] hard assets have increased significantly,” said Starwood Property Trust president Jeff DiModica. “Government bonds are close to zero globally, and high-yield bonds trade at 3 percent, so [those are] not very compelling … We try to look at what leverage point we want to be involved in, and we’ll pick a spot in the stack with moderate leverage. We run the lowest leverage of our peers and create an accretive return for our shareholders.”

Tredway said an abundance of liquidity coupled with low interest rates in the market “is driving a lot of the [positive] dynamics,” adding that “millennials want to rent more; they like the flexibility, so we feel very good about multifamily. And office is a big part of our portfolio, with investment-grade tenants.”

Guggenheim, whose platform focuses on large, institutional borrowers, said, “We focus on assets in some sort of transition, so the key for us is, what does the stabilized [net operating income] look like? We still love multifamily, and it will continue to be in high demand. We like dynamic markets, like New York, but it’s been complicated with things like rent control regulations. But we stick to major property types and we’re highly selective on hotel and retail.”

Herzka said that today’s market is very unique from the perspective of an intermediary, given the sheer volume of shops ready to deploy capital on any given property.

“When we get a deal, we know where it fits into certain buckets and each lender’s tolerance for risk and reward,” he said. “There’s so much capital available that it’s about finding the right lender in the right position. The people taking the biggest risk are getting paid for it. It’s a good market for borrowers — and lenders, once they can articulate where they want to be.”

And in discussing the impacts of uncertainty, geopolitical factors and other aspects such as recent restrictive rent control legislation in New York, the panelists in this grouping didn’t seem too concerned about the long-term ramifications those potential disruptions could have on real estate.

On the other end of the spectrum, somewhat outside of the realm of the biggest players spinning the largest deals to the highest-profile sponsors, the bridge lending market and the ever-expanding CRE CLO arena has created a bit of fervor in this yield-starved, low interest rate environment.

When asked if the sector can be considered “a whole new ballgame,” every panelist responded excitedly.

“From a rate perspective, it’s unheard of,” Kirsch said. “I work with people who’ve never seen Libor above 2.5 percent and [at one point, it had] never [been] above 1 percent. Ten percent of 200 participants in the space are doing 90 percent of the business; the big boys are doing most of it, and the impact is pricing compression. In our book from 2017 to 2018, our weighted average spread was down. And selfishly, I think market disruption will help a lender like me because it’ll take 30 percent of the [alternative] players out of the game over night.”

Kohn said “we’ve had, what, 125 months of expansion and 108 months of consecutive job growth? Because growth has been slow, [the market has] been more controlled, so there hasn’t been a ton of excesses in the system. The cost of debt is so low, why sell? While the sales market is healthy, the debt market has exploded. We hope we make it 130 months [of growth], or more.”

One of the biggest themes in the bridge space that’s accompanied low interest rates has been the bridge-to-bridge financing phenomenon phasing out the traditional bridge to permanent loan route and also a slight erosion of underwriting standards perceived by some.

“There’s a lot of liquidity in the market right now, so we’ve seen a lot of bridge-to-bridge financing,” Franchot Borok said about her firm, a middle market, value-add player providing transitional senior loans to institutional sponsors. “Maybe [a borrower] is halfway through a plan or leading into the middle of a cap ex plan, so they need more time.”

And Kohn added that he’s seen this more frequently in multifamily and that borrowers “want to repatriate some equity and improve the [internal rate of return]. There’s a lot of it going on, and it’s all positive; there’s still room for them to recover and get things done. But as time goes on and more money flows into space, we might see more issues.”

And, in terms of a possible erosion of underwriting standards, Franchot Borok said, “There’s been some slippage, but it feels ok. If you compared the CLO market to last year’s, you might see some erosion.”

“We’re seeing a reduction in exit debt yield requirements,” Kohn said. “And also a higher level of proceeds and advances as competition has heated up. Some lenders will go up to 85 or 90 loan-to-value in some multifamily.”

In order to be successful in the debt fund space, Franchot Borok said, “successful groups have had to find a niche. We’ll take execution risk and we won’t push leverage, so we want alignment with great equity sponsors who can execute or bring in another owner operator.”

Kirsch would rather not focus so much on sponsorship in his realm: “Of our balance sheet, I’d take the better real estate over a great sponsor,” he said. “You can get pricing or the sponsor wrong, but if you have the right location and asset type, you can find someone to get you out of that deal. A quarter of our business are new clients taking us to different markets. In some cases, executing game plans too quickly this environment solves a lot of problems.”

While foreign investment has softened, the panelists agreed that Canada continues to be one of the most prominent foreign investors in the U.S., while acknowledging the opportunities that China’s previous retreat created for bundles of European and Asian lenders and investors who see the U.S. as an obvious destination to fetch returns amid a relatively deflated global economy.

“Foreign transaction volumes are down 40 percent and they became net sellers for the first time in years,” Sotoloff said. “China [was] replaced by Canada and certain other Asian countries. We’re seeing transaction volumes below last year, down seven percent. When you look at a PGIM, operating big core funds, you’re seeing a bit of depreciation. There’s a lot of money still interested in value plays, but return expectations in debt and equity have come in. We are [a] beneficiary of that.”

Vanderslice said that the reason why money is flowing in is because “as rates have come down, cap rates haven’t, so the returns you can get [in the U.S.] are at least positive. The three biggest investors are Canada, Bahrain and Israel, so will [they be] more patient than the Japanese and the Chinese over time? I’d say yes.”

“They want diversification,” McDonnell said. “In the U.S., you can get scale, and it’s pretty well regulated. [Many are] attracted to the coasts because they recognize those cities, but in many cases, people want ‘B’ markets.”

As it relates to specific assets classes for foreign investors, Appel said that “certainly all the Chinese money went into condos and hospitality, and that hasn’t worked out for them, which is why you see them vacating [certain] markets. Canadians have always been long in office and multifamily; Israel is active in multifamily. The private capital oversees is behaving like domestic [money], willing to take on more risk. Retail is out of vogue across the board.”

“You start on the coasts, the middle-market [space] pushes value into secondary and tertiary markets,” he said.

The biggest topic was how to handle surprises and uncertain circumstances today that are inevitable in construction deals.

For lenders, getting involved with the right developer and having the ability to asset-manage and provide flexibility is key.

“It starts with choosing the right developer,” Petrula said. “Construction is one of the more risky routes you could take, so working with someone with deep pockets, who can write a check if there are cost overruns, is important. Budgets can change, but it’s how they react to those changes. It’s important that we’re not a hindrance in getting a project built. Being quick and being able to render a decision when things change is important.”

May, who leads a major mezzanine financing arm for one of the New York’s largest landlords, said, “We’re out developing everyday and we can manage issues similar to our borrowers. For example, if there’s a question about the cost of structural steel for a 1,000-foot tower, I can walk down the hall and ask [what it is]. We can understand what’s happening in a market. We structure everything to be able to handle any issues that come up.”

Stolly said he’s seeing a trend of developers “who are well regarded and have shied away from the commercial bank syndicate model” to fund projects. “It comes with the proliferation of the finance companies,” he said. “Every construction loan has changes along the way, and you need a partner who can handle issues that need to be solved.”