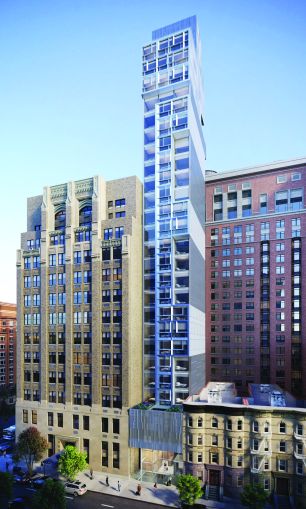 It’s getting harder to claim firsts in modular construction, but a slender, 26-story hotel planned for Downtown Brooklyn could claim that crown.

The Motto by Hilton will replace a single 33-foot wide townhouse at 88 Schermerhorn Street, and rise over 300 feet, making it the borough’s first high-rise modular hotel.

The property, located between Boerum Place and Court Street, is being developed by AWH Partners and Opterra Group, and designed by Danny Forster & Architecture. Forster designed the AC Marriott in Nomad, which will be the tallest modular hotel in the world when completed.

The Brooklyn property is slated to be the first Motto-branded hotel in the city, an “affordable luxury” micro-hotel brand launched by Hilton in 2018, the company confirmed.

“We’re very interested in technological advances and pushing the boundaries,” said AWH co-founder Chad Cooley. “We think modular construction is where the future of construction is headed, and it’s our intention to do that here.”

The prefab construction method, which involves building units off-site before delivering and assembling them on-site, has been on the upswing over the past year. The 26-story AC Nomad, which is set to open in 2020, was preceded by CitizenM’s high-rise modular hotel on the Lower East Side, and former Deputy Mayor Alicia Glen has touted modular construction as the solution to the city’s affordable housing headaches. Earlier this year, the city signed off on the first affordable development to require modular construction.

Brooklyn itself has played host to some significant developments in the space, as it houses the world’s tallest modular building: the 32-story 461 Dean Street apartment complex in Prospect Heights. The property, part of the Pacific Park complex, formerly known as Atlantic Yards, was completed in 2016 after facing several construction hurdles, according to media reports.

Forster said the planned Brooklyn hotel will benefit from his firm’s previous experience at the AC Nomad. Similar to that hotel, the Brooklyn property will have a concrete podium built onsite for amenities and public spaces, while the bulk of the tower — with 117 hotel rooms — will be built using modular construction. Unlike the AC Nomad, however, where the modules were latched on to a concrete core that was also built on-site, the plan, in this case, is for the core to be manufactured using modular construction as well.

“We are endeavoring to take the next step, [to be] full modular above 40 feet, both core and rooms,” said Forster.

The developers have not committed to any completed design but are more than a year into the design process. One of the “fascinating” aspects of modular construction, Cooley said, is how much has to be decided earlier in the process, since everything from the mechanical components, to the facade, and even the furniture, are manufactured and assembled, together.

“We now know how much upfront design work needs to be finalized and coordinated at a disproportionate early stage,” said Forster.

The architect, whose other projects include Autograph, the future hospitality venue in Hudson Yards, and the Courtyard by Marriott near Ground Zero, said that the narrow floor plates make for a unique challenge both structurally, and for maximizing the number of possible rooms. An additional design feature that’s unique to Motto is an ability to connect rooms, allowing for flexible use of the space, said Forster. This way, rooms for solo travelers can easily be transformed into connected suites for larger groups or families.

At the street level, the hotel is sandwiched between the remaining two townhouses on the block and a 1920s co-op building. The podium will be level with the townhouses in order to keep the streetscape in harmony, and the front door is set back from the street, creating a dramatic cantilever over a plaza that opens to the space around it.

However, Forster said, because of the tower’s height, it also needs to fit with the wider Downtown Brooklyn skyline. “It’s trying to speak both languages.”

Forster finds it important to divorce the modular methodology from its associated aesthetic, which people tend to see as repetitive and grid-like.

“We worked really hard not to let the methodology dictate the aesthetics of the building,” he said. In keeping with that, the tower facade will also be varied, with the middle column of rooms extended further out, and the tower divided into three horizontal sections, which the color-blocked side facade will help accentuate.

As a final design motif, Forster said he had recently visited the New York Transit Museum located across the street from the site and built over a decommissioned subway station. He hopes to incorporate inspirations from the museum and from the neighborhood into the hotel.

That would fit with Motto’s brand, which is supposed to feel local, and is competing for the the same urban travelers that frequent Moxy by Marriott, CitizenM, and Yotel, among other affordable luxury brands.

“Our travelers want to explore the most popular urban destinations, and we want to put them in the heart of the action,” a spokesperson for Hilton said. The company has thus far announced one Motto-branded hotel in the Fourth Ward in Atlanta, and has additional deals in various stages in Copenhagen, Milan, Lima, Mexico City, Savannah and Washington, D.C., the spokesperson said.

AWH and Opterra, both led by Blackstone alumni, purchased 88 Schermerhorn from condo developer Second Development Services in July for $13.6 million, according to property records. SDS’ plans for the site, a 26-story building with 23 condos, were rejected by the Department of Buildings.

The current developers have yet to file plans with the city, but are “in dialogue” with the DOB, Forster said.

But if all goes to plan, the property could act as a prototype for future modular construction in the city, setting a new path after previous attempts faced significant challenges. The site’s proximity to the Red Hook port, where the modules would likely arrive, would allow them to be delivered sequentially, drastically reducing the disturbance to the neighborhood.

“It would have a limited impact on the site, so it’s a great model for an urban infill high-rise,” Forster said.