The generation born in the mid-to-late 90s prefers to go to brick-and-mortar stores for purchases and to find new products. 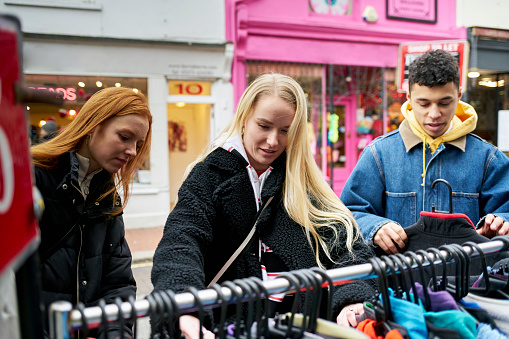 It’s beginning to look a lot like Christmas for the nation’s retailers, who are gearing up for an $101 billion holiday spending bonanza that kicks off this week.

Although Black Friday has traditionally been a one-day frenzy of bargain hunting the day after Thanksgiving, consumer watchdogs say this year, more than ever, Black Friday will be a week-long affair that serves as a prelude to four weeks of holiday shopping.

This year, shoppers — and retailers — lose almost an entire week of holiday shopping, thanks to a U.S. Thanksgiving Day that’s six days later than last year, but a buoyant economy and high employment has the consumer looking to break out his wallet well before Black Friday and keep spending right up until Christmas.

Overall, the forecast from New York-based International Council of Shopping Centers predicts a strong 2019 season with spending topping $101.4 billion over the Thanksgiving weekend as the average adult spends $683 on holiday-related items.

According to the Pre-Black Friday Intentions Survey conducted by ICSC, 85 percent of adults will shop during the four-day weekend, and 80 percent will visit a mall or shopping center. The bulk of shoppers will spend their money in a physical store over four days beginning on Black Friday. ICSC found that 44 percent of those planning to shop over the weekend will buy online and pick-up in store, and 72 percent of those shoppers will spend additional money while at the store.

The National Retail Federation estimates that holiday retail sales in November and December will be up between 3.8 percent and 4.2 percent over 2018 for a total of between $727.9 billion and $730.7 billion. And while more than half (56 percent) will shop online, 53 percent will also shop in department stores, discount stores, grocery stores, clothing and accessory stores, electronics stores and local small businesses.

While the predictions point to a healthy season for retailers, one big surprise that may emerge this year is how the kids keep the spirit of the shopping season alive.

Despite the global shift to more online shopping, consulting firm A.T. Kearney found that 81 percent of Generation Z, that’s kids born in the mid-to-late 90s, prefer to go to brick-and-mortar stores to buy their stuff and find new products.  The generation born into a digital economy finds browsing the buying to be a great escape from their connected world and see it was a way to feel closer to online influencers by buying products they endorse.

IMB surveyed over 15,000 shoppers between the ages of 13 and 22 in 16 different countries and found that they’re smart about deciding where and how to shop, and while they’re short on funds right now, they wield significant influence over family purchases. In the U.S. alone, consumer spending on Gen Zers totaled $829.5 billion in 2015.

Tech-savvy Gen Zers who know their way around a store’s app aren’t just spending on themselves, they direct the purchasing by older members of their households, guiding their parents through online offers to find the best, not just in terms of price, but product availability, quality, efficiency of service and online security.

According to the IBM survey, more than 98 percent of Gen Z prefers to make purchases in brick-and-mortar stores; 66 percent want very few products to ever be out of stock; 65 percent want to get real value for their money through things like discounts and rewards programs and; 56 percent of Gen Z shoppers want the store experience to be fun so they won’t get bored.

Because they’re not blinded by technological “bells and whistles,” IBM found that Gen Z’s priorities lie in the basic retail experience. They like to look nice in social media posts and are breeding the new generation of apparel resale and rental outlets through their desire to be unique while remaining thrifty. They want sales staff who can engage them and who are knowledgeable about their products and they want plenty of stuff to look at, touch and feel as they step outside of their online world.

Because this mobile-first population is never without their iPhone, they want their technology to work with the store; think on-sale shoe offers beeping as they browse the shoe aisle, clothes fashioned from environmentally sourced materials identified with a bar code, coupons flashing on their phone as they walk through the store door. Another trend we’ll see more of this year is the addition of charging stations so Gen Zers don’t run out of juice as they browse.

And, in another major shift that I’ve spoken about before, cashless shopping is all but inevitable as these young shoppers hate to wait in lines. Stores such as Apple and Amazon have already started equipping their sales staff with mobile devices that can take the customer’s payment information as soon as they decide what they want to buy, and the store that scans your basket is already a thing.

Whether it’s the Gen Zers, the boomers or millennials, it looks to me like retail is evolving to cater to a changing customer who still cares about a quality shopping experience that brings them closer to their family, friends, and online influencers.

Adelaide Polsinelli is a vice chairman at Compass.