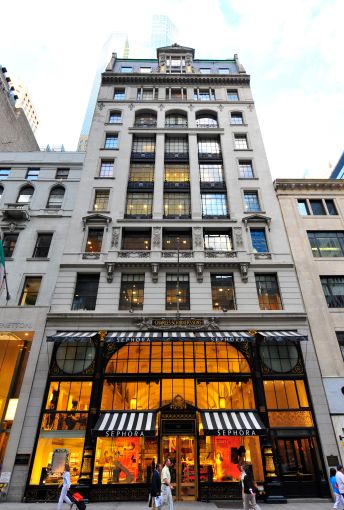 The Ralph Lauren-owned brand inked a three-year lease at the historic property between East 48th and East 49th Streets. The 12-story Beaux Arts building was originally constructed in 1912 for Scribner’s Bookstore. Asking rent in the deal was $1,000 per square foot, according to sources familiar with the deal.

Club Monaco will replace pricey yoga retailer Lululemon, which is heading across the street to 592 Fifth Avenue, as CO previously reported.

“597 Fifth Avenue offers Club Monaco an unrivaled opportunity to intrigue crowds on Fifth Avenue,” Thor Chairman Joe Sitt said in a prepared statement. “The property’s opulent interior offers Club Monaco’s clientele an experience unlike any other and we are thrilled to welcome them to this iconic address.”

The retail portion of 597 Fifth has a large, grand staircase, 31-foot ceilings and 55 feet of frontage on Fifth Avenue, a block away from Rockefeller Center. The office tenants upstairs include Burma Bibas, Reclaim NY, Yieldstreet and Knotel. It will join nearby retailers like the aforementioned Lululemon, Sephora, Puma, H&M and Saks Fifth Avenue.

This will be the fifth New York City store for the retailer, which is headquartered at the Starrett-Lehigh Building in Chelsea. Its other outposts include a Flatiron location at 160 Fifth Avenue, a Soho store at 536 Broadway, an Upper West Side store at 211 Columbus Avenue and separate men’s and women’s stores at Brookfield Place.