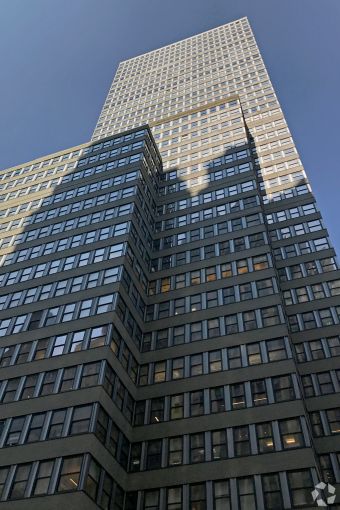 The five-year loan retires roughly $270 million in previous debt provided by Bank of America in May 2015 to fund Shorenstein’s $330 million ground lease purchase. Previous owners The Lightstone Group, Kamber Management and Solil Management controlled the operating sublease, the master lease and the ground lease, respectively, according to a Feb. 2015 report from The Real Deal, which first reported that the sale was in contract.

A JLL Capital Markets team led by Geoff Goldstein, Michael Gigliotti and Christopher Peck arranged the refinance on behalf of Shorenstein, sources said. JLL’s Andrew Scandalios and David Giancola were also involved in the negotiations. The financing was sourced by brokerage HFF prior to its July acquisition by JLL, sources said.

Built in 1950, the 43-story property — between 38th and 39th Streets — is situated near Times Square and Bryant Park, just a block away from the Times Square subway station; it was designed by architect Ely Jacques Kahn.

Lightstone and Kamber reportedly put its control of the property on the market near the end of 2014, with the sale closing several months later on April 30, 2015, at a 4.8 percent cap rate. Upon Shorenstein’s 2015 purchase, the property was 80 percent leased, according to CoStar Group, with 34 years remaining on the lease.

Starting in 2015, the building underwent a three-year renovation, in which roughly $62 million was deployed to further modernize the asset, sources said, building on some work that Lightstone had done the year before. The work included a renovation of the lobby and security, common areas, roof and terrace and elevators. The property has also undergone a large-scale repositioning of its retail space, in which new storefronts were added.

Currently, the asset’s 33,000 square feet of retail space is 95 percent occupied to tenants such as Luke’s Lobster, ‘Wichcraft, Dig Inn, Juice Generation and Gregory’s Coffee. Wells Fargo and Capital One also have bank branches in the building, according to the property’s website.

In the last year alone, the building has experienced about 160,000 square feet of leasing activity, sources said.

In January, flexible office provider Knotel inked a lease for around 28,405 square feet across the 25th and 26th floors, as CO previously reported.

Asking rents for office space at the building range from $58 to $70 per square foot, according to information from CoStar. Brokerage CBRE currently handles leasing at the location.