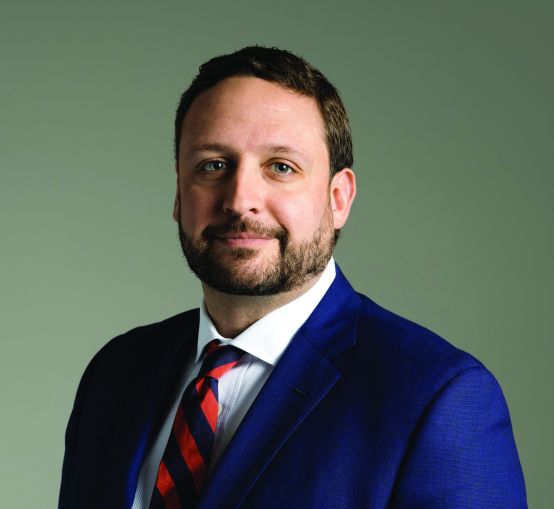 In a cut-throat financing environment, you’ve gotta use your smarts. And having a background that involves everything from development to non-performing loan sales to equity raising to debt arranging doesn’t hurt, either. Avison Young Principal Justin Piasecki was one of the firm’s very first hires in 2012. Today he leverages the firm’s global footprint and collaborative approach to deals to execute transactions from coast to coast, including a $160 million land pre-development loan in L.A. and a $50 million hotel Construction Loan for a Brooklyn Marriott. The 38-year-old lives at the Jersey Shore with his wife Becca, their three kids, Annika, Paxton and J.J., and two dogs.

Justin Piasecki: I raise equity, debt, mezzanine financing and preferred equity. So, full capital stacks for commercial real estate investors and developers. We trade performing and non-performing loans for banks, funds and family offices. And then we also secure lines of credit for bridge lenders.

So there’s no such thing as a typical transaction for you?

Every day is really different. We’re doing everything from raising $100 million for a line of credit for a residential fix-and-flip lender; to a $70 million pref-equity raise for a large owner of multifamily properties in L.A.; to a $86 million ground-up hotel financing for a property in Brooklyn.

How did you get interested in commercial real estate?

My family actually worked on the construction side of the industry. My grandfather and my father were mechanical contractors and general contractors for larger commercial-type projects, mainly in Philadelphia, New Jersey and Northern Delaware. So, I was always going to job sites as a kid. It’s funny, I was reading an article a few months ago and an office building in South Jersey sold for $35 million to a group in Philadelphia. I said to myself, “I know that building!” My grandfather and my dad’s company built it, and I remember being around 5 years old walking into the building when it was just walls and dirt and our guys were laying the pipes in the ground. I called the guy up who bought it and told him this story [laughs]. So, I thought I wanted to be a developer and so when I was in college [at Rutgers University] I was sending out emails and letters [to potential employers] trying to figure out exactly what I wanted to do but I knew I really enjoyed being around developments.

What was your first job out of college?

I started out at Triple Crown Properties in Wellington, Florida, doing single-family residential development. The founder of the company bought all this land when it was essentially dirt roads in the ‘80s and early ‘90s as the equestrian scene was just starting to pick up there. And it just so happens that all the land that he bought was right next to where the equestrian show grounds are today. He built a number of high-end developments there and Bruce Springsteen was a rental client of ours for a period of time. I remember two months in a row I’d give [Springsteen] the keys to a house he was renting for around $75,000 a month. It was crazy. So, I started off in the development world, but we also did property management, which gave me some great experience.

How did you transition over to the finance side of the business?

I was a young guy living on Palm Beach [Fla.] and a friend of mine had raised some money from high-net-worth investors and was going to be lending that money out. He said, “Look, you’ve networked, you know a lot of real estate brokers, why don’t you join me?” We started with $10 million and put it out in 30 days and then were like, “Okay. What do we do now?” We were lending at a high interest rate of around 9 percent — which is now called bridge lending, although back then it was known as hard money lending. We had a lot of other deals lined up but no more money to put out.  I had a friend at Citigroup who liked the properties we were lending on. So, I started selling our loans every month to a couple of banks and private equity funds which were paying us a good premium in return and I learned the whole secondary loan trading side of the business by doing it myself. We grew for two solid years then saw the writing on the wall with the downturn coming; it was getting harder and harder to find good quality deals. Then I went to Carlton Group in 2007.

Interesting time to join a new firm, at the precipice of the global financial crisis.

It was scary and also fun. I was still in my twenties and I was at Carlton for a year before things went sideways doing debt and equity raises — just as I do now — and I was also trading performing loans. When the downturn hit all the lending stopped and everyone stepped back. I started making phone calls to those I was doing deals with on the performing side and asking: “Hey, do you have anything to sell that’s non-performing?” There was a six-month period when there wasn’t much going on but then I got a call from Capital One saying, “Hey, we have a large non-performing portfolio we’d like to discuss with you.” It ended up being a $350 million sale of small balance commercial non-performing loans spread across 42 states. Then things started moving and we did a $400 million deal for Ocean Bank in Miami, a $150 million deal for Southwest Securities Bank in Dallas, a $150 million deal for East West Bank in L.A. So, the financing side was very slow, but we did a lot of non-performing loan sales.

You joined Avison Young in 2012, so at the other side of the crisis. What kept you busiest back then?

I was the first hire, other than Greg Kraut [who helped co-found Avison Young’s New York office]. The market was coming back at that time; the loan sale business was still fairly busy, and the recapitalization and the traditional debt and equity business was just picking up again. There were still some non-performing sales out there, and a lot of the bridge lenders who exist today weren’t doing bridge loans quite yet, they were buying non-performing loans. That slowed down, but [those firms] had already raised money, so they were out looking for higher yield opportunities for their investors. And the natural thing was to go into bridge lending. Since 2014 we’ve raised around $1 billion in facilities for those groups, some in New York, but some in California and Texas. The smallest we’ve raised is $10 million, the largest is $200 million.

How does Avison Young being a global firm help your business?

Avison Young as a firm has 124 offices in 24 countries. When I joined we had 11 offices in Canada and five in the U.S. I’ve been doing a lot of calls with our counterparts in our Seoul, South Korea, office because they have funds and insurance company clients who want to invest in mezzanine debt. We focus nationally and have been doing a lot of business in San Francisco, L.A and Seattle. We just closed a deal on an assisted living facility in Canada with a New York client.  When I joined, [Avison Young CEO] Mark Rose was pushing collaboration in the firm, and this has actually happened. We have a shared database [of clients] and weekly and monthly calls with all the finance teams. All the lenders we transact  with are in our shared database.

Where is the majority of foreign capital coming from today?

I’d still say that Canada is top, followed by South Korea. A lot of the debt funds have been doing road shows over there, in fact; there’s interest in investing in first mortgages on construction projects and mezzanine debt.

How is the mezzanine and preferred equity side of your business today?

It’s booming. Using debt is cheaper than raising equity for sponsors and a lot of groups we’ve been arranging joint venture equity for over the past six to eight years are now moving into the preferred equity and mezzanine space where they are getting defensive. Equity can be wiped out but when you’re in a debt position there’s a way to get to the property if need be.

In terms of product types, what’s hot and what’s not in the eyes of financiers?

Are you seeing any signs of stress in the market?

Lenders are being more selective with the types of deals they lend on, here in Manhattan especially. But other markets have actually picked up; Queens, Brooklyn and Long Island City. People are switching hats and saying, “Manhattan is really expensive let’s look at these other areas and maybe there’s an opportunity zone deal we can do.”