Under Construction: One Madison Avenue

SL Green gets ready to dive into a planned 1.4-million-square-foot development in Midtown South 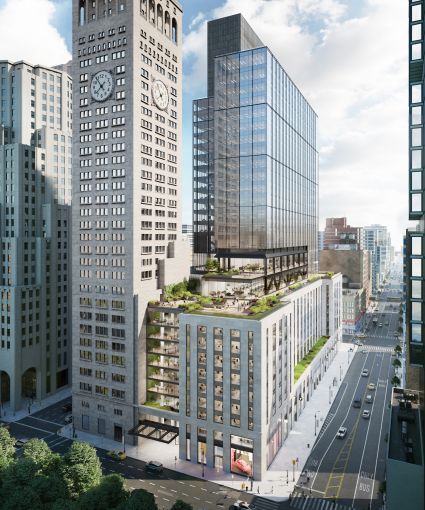 A rendering of SL Green's One Madison Avenue on the border of Madison Square Park. Plans call for a new tower on top of the building's existing podium which will deliver 22 floors of office space. Image: KPF 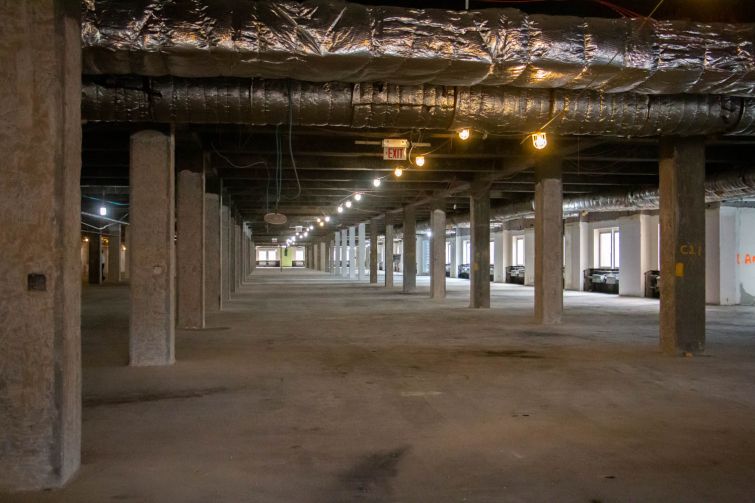 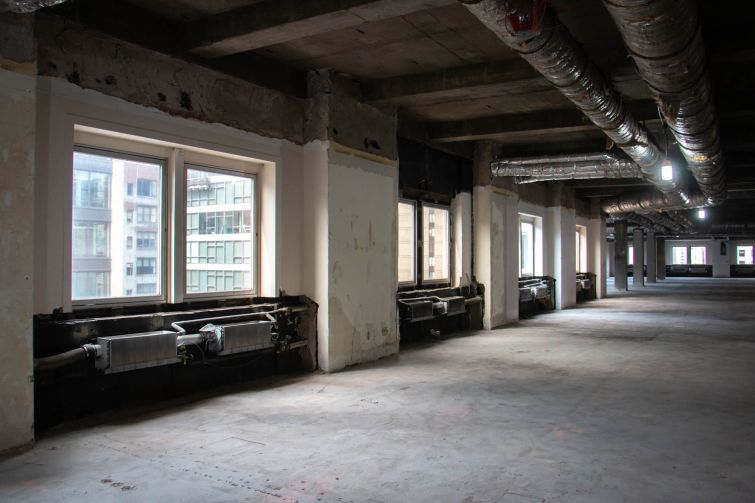 A stretch of windows in the podium floor, which will be enlarged. Photo: Julia Cherruault/For Commercial Observer 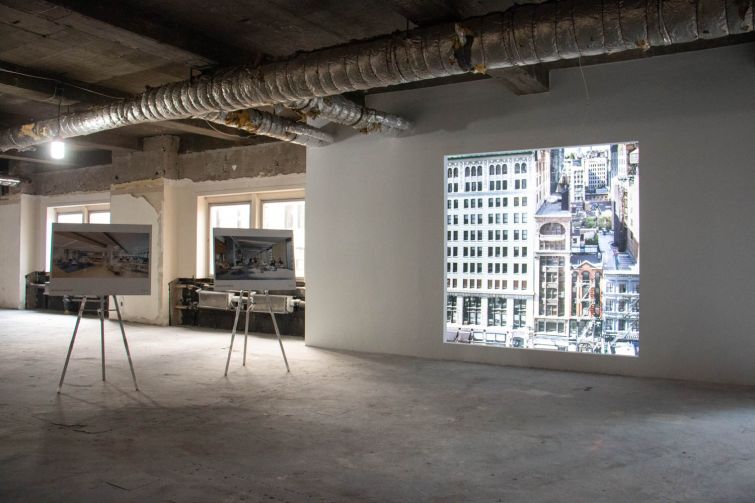 A mockup shows the size of a typical new window in the podium floor. Photo: Julia Cherruault/For Commercial Observer 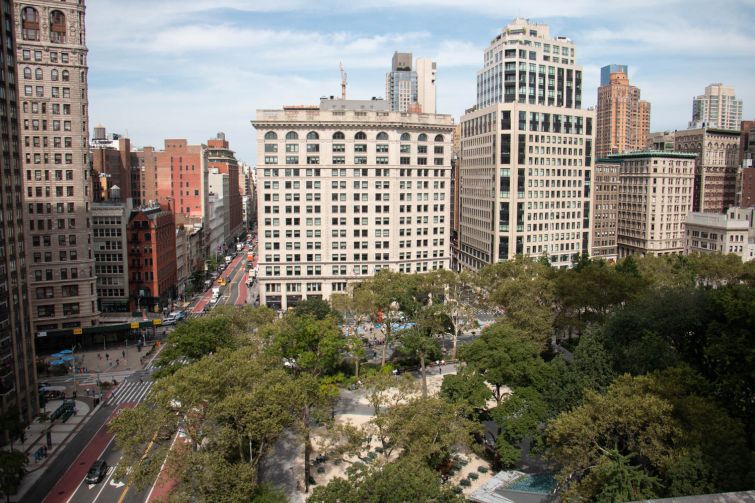 A view of Madison Square Park from the planned terrace at One Madison Avenue. Photo: Julia Cherruault/For Commercial Observer 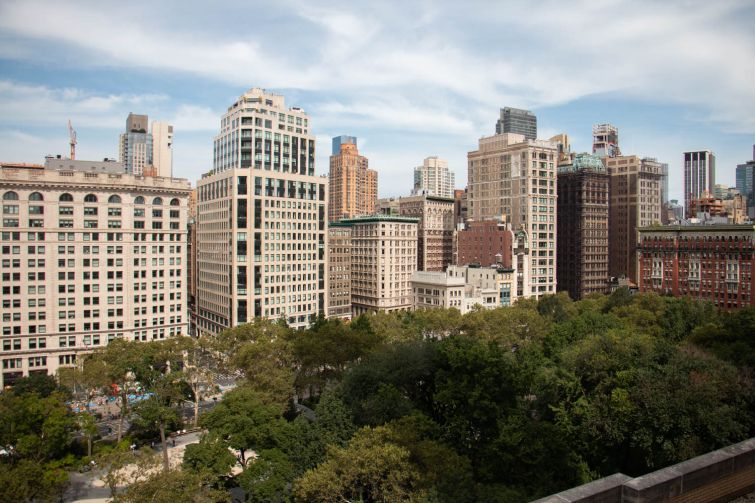 A view stretching uptown, including a glimpse of Jeff Bezos' penthouse pad, from the planned terrace at One Madison Avenue. Photo: Julia Cherruault/For Commercial Observer 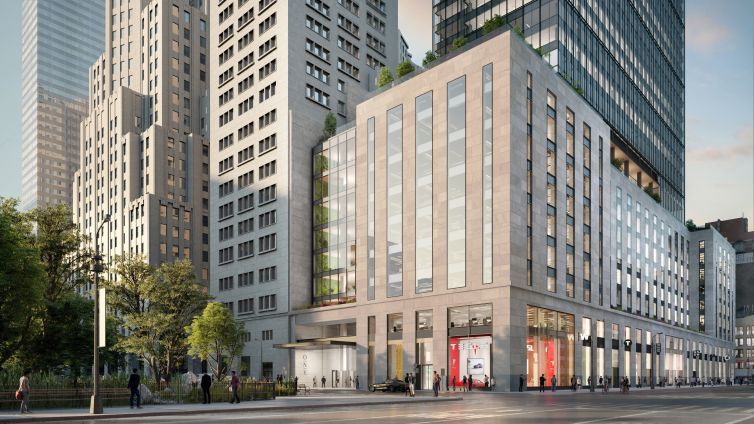 A rendering of the building's new Madison Avenue entrance, where the adjoining upper facade will be replaced with a glass curtain wall. Image: KPF 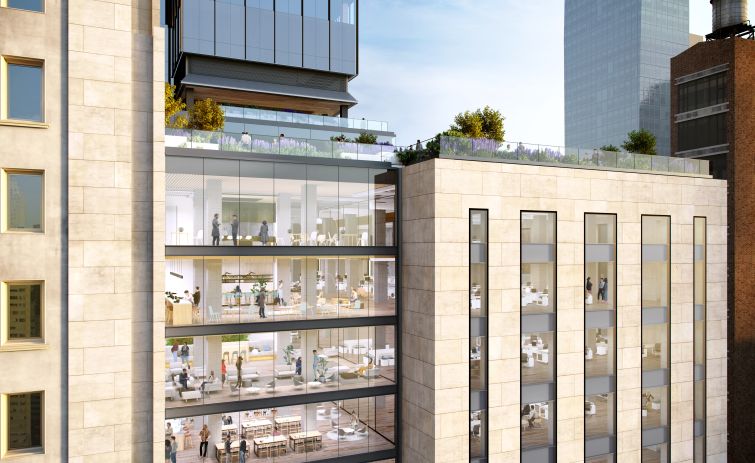 A rendering of future office space and terraces at One Madison Avenue. Image: KPF 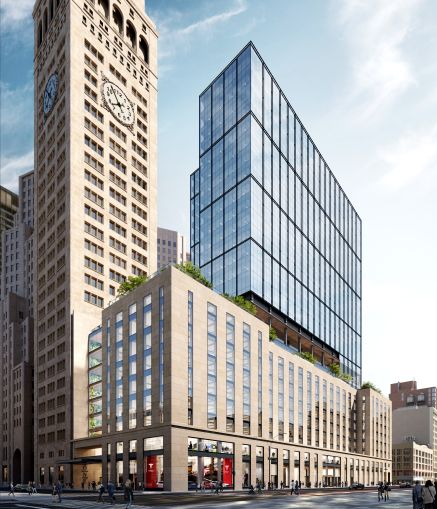 The terraces at One Madison Avenue will feature a leafy view of Madison Square Park and, looking up past the treetops, a glimpse of Jeff Bezos’ recently purchased $80 million penthouse apartment.

It’s a fitting tableau for SL Green Realty Corp.’s planned 1.4-million-square-foot development, which is already generating buzz among tech and creative companies. The project, at the intersection of Madison Avenue and 23rd Street, aims to bring a mix of old and new to the red-hot Midtown South submarket.

“With all the technology tenants that are driving the market right now, they’re struggling to find big footprints,” said Steven Durels, executive vice president and director of leasing and real property at SL Green. “They want to be in this part of town … but it’s tough to find projects with real scale to them.”

The firm is getting ready to tackle the development as it wraps up construction at One Vanderbilt, its blockbuster project in Midtown. It’s bringing over some of that team, including architects KPF.

At One Madison, which houses a portion of Credit Suisse’s headquarters, the last few staffers are filtering out (there’s about 50 left) and into the bank’s neighboring offices at 11 Madison Avenue. Construction will officially kick off in the first half of next year and is expected to take a little over three years.

The ambitious design involves ripping out the existing core in favor of a brand-new one. The limestone facade will be preserved, though the windows will be enlarged. A handful of upper floors, which mainly house mechanicals, will be razed, bringing the structure down to nine floors. The enclosed bridge connecting the property to 11 Madison Avenue will also be demolished.

The podium will set the stage for the addition of a 475,000-square-foot tower with glass curtain walls. It will house two “garden” floors, featuring terraces and airy, town hall-style spaces, plus a smattering of private terraces; in total, there will be almost an acre of outdoor space. Upstairs, the 14 floors of offices will feature column-free spaces, with the open layout preserved by the tower’s side-core construction, meaning the elevators will be lined along the building’s northern edge.

“There’s a lot of people out there, especially on the creative side, that are looking for a different kind of floorplate,” said Doug Hocking, a principal at KPF. “What they’re looking for is the ability to see their entire workforce in one perspective; so, coming out of the elevators and seeing everybody there, as opposed to walking around the core and having their workforce divided.”

The end result will be a 26-story property with 22 floors of office space — 14 in the new tower, eight in the historic podium — plus the two leaseable garden floors. For the most part, the upper floors will be sized at about 35,000 square feet with 14-foot ceiling heights, while the podium floors will reach around 91,300 square feet with 12- or 13-foot ceiling heights.

Asking rents at the building, which is slated for delivery in the third quarter of 2023, are expected to run above $100 per square foot and average around $130 per square foot, Durels said.

The building is a natural fit for firms in the tech, fintech and creative arenas; a number of firms have already toured the property, and SL Green has “several proposals” out with tenants for a total of three-quarters of the building, he said.

The building could continue in its tradition as a headquarters — it was originally built as part of MetLife’s home base — or it could possibly see one or two tenants in the podium floors, and three to five tenants in the new construction, Durels said. Some firms may opt to mix-and-match floors to reduce costs, he added.

Other improvements include a refresh to the lobby and the ground floor retail along 23rd Street. The spaces could house anything from a food hall to a series of retailers to a big-box retailer, given the 100,000 square feet of below-grade space.

There will be a new entrance on Madison Avenue, with the adjoining upper facade replaced with a glass curtain wall. “We’re trying to bring the park visually into these base floors,” Durels said. An auditorium with an 800-person capacity from Credit Suisse’s days will be fixed up for tenant use for things like presentations and town halls.

And there’s one last perk: The upper floors come with a larger-than-life view of the adjacent MetLife clock tower.

“It’s exactly what everybody wants, but they can’t find,” Durels said