NorthMarq Lends $52M on the BRiQ Rental Building in DoBro 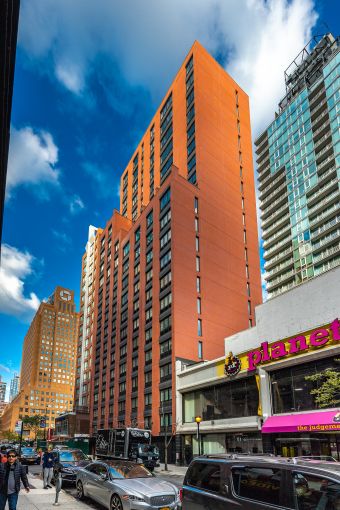 NorthMarq has provided $51.8 million in Freddie Mac-backed financing to CBZ Management to refinance its luxury rental building BRiQ in Downtown Brooklyn, according to city records.

CBZ Management wrapped construction on the 21-story, 112,000-square-foot property — at 237 Duffield Street, between Willoughby and Fulton Streets — in September last year, and its 110 units, which average around 619 square feet, are 88 percent leased, according to CoStar Group. Twenty-two of the 110 units are designated as affordable.

The property — designed by Urban Tectonics — features two outdoor common areas, an indoor lounge, a virtual doorman, a fitness center, laundry facilities and bike storage, according to information on the property’s website.

On the ground floor and basement level, child care and development day care center Lightbridge Academy is housed in just under 10,000 square feet of space, according to CoStar.

The building sports studio, one- and two-bedroom units, with monthly rents ranging from $2,400 for studios to around $4,250 for two-bedroom residences. Gazal Brokerage Group, led by Daniel Gazal, handles the leasing and marketing of the site, according to the property’s website.

In November last year, The Real Deal reported that CBZ was looking to sell the property for around $100 million. Upon stabilizing the asset, CBZ was projecting annual net operating income of $4.3 million on net revenues of $4.6 million, according to TRD. CBZ bought the building in 2007 for just $9.5 million, city records show.

“Downtown Brooklyn and its surrounding environs are exploding and have been for some time,” Meridian Investment Sales’ David Schechtman told The Real Deal at the time. “This is ultra-luxury new construction. They did an incredible job and this is a tip-top location.”

Officials at NorthMarq were not immediately available. CBZ could not be reached.