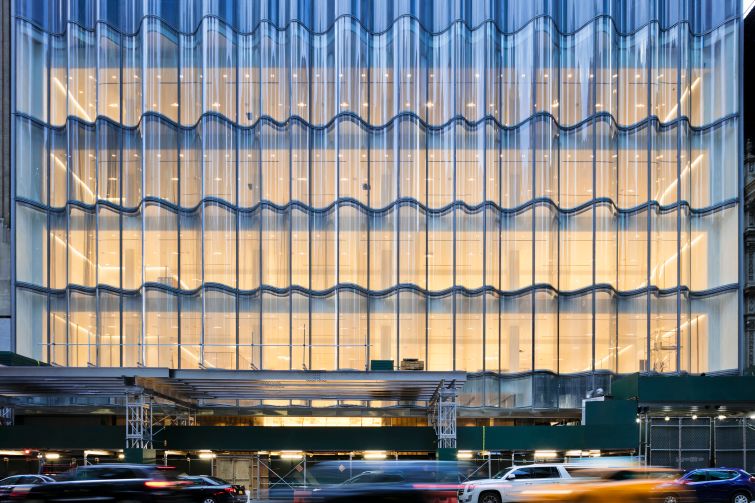 One day back in 2012, Blake Nordstrom was walking up Broadway towards Columbus Circle, around the corner from the site where he and his brothers had recently closed on a deal to build a seven-story Nordstrom flagship in New York.

The brothers had acquired the site, located smack in the middle of the block bounded by East 57th and 58th Streets and Broadway and Seventh Avenue, from Gary Barnett of Extell Development. Barnett was planning to build a condo tower worthy of Billionaire’s Row on top of the shopping center.

The deal marked the culmination of a multi-year effort by the retailer to land a suitable spot in the big apple. Blake was with Derek Trulson, a JLL broker and family friend, who recounted how Blake (who passed away last year at the age of 58) was struck with a vision.

The Nordstrom exec looked at the row of once-handsome Broadway buildings, between West 57th and West 58th Streets, and said, “What if we got the corner buildings too?”

That would give the Nordstroms a flagship that wrapped all the way around Broadway, knitting together Barnett’s new site and the three landmarked buildings along Broadway, once part of the city’s glittery Automotive Row.

Blake stood on Broadway, surveyed the crumbling facades, Trulson said, and envisioned what in fact came to pass this week.

The Nordstrom flagship store, its first in New York, opened with a distinctive facade of wavy glass above it’s West 57th Street entrance, seven light-filled floors of food and fashion, and a cautious optimism that the storied brand can succeed where some of its fellow department stores have failed.

“If you look at what Nordstrom’s done, it’s part of the fabric of New York City, it’s indisputable,” said Trulson. “[It has] all the quirkiness that goes with different facades, different buildings, different owners.”

“It was created out of a collision of mismatched buildings,” agreed Dawn Clark, the Nordstrom executive who oversaw the store’s design from start to finish. “It was an opportunity.”

The Nordstrom family, which is based in Seattle, has wanted to open a flagship store in New York for decades. The three brothers, Pete, Erik and Blake Nordstrom, were the fourth generation to run the brand, which started as a shoe company in 1901.

From the day that the search began until the doors opened on Thursday, there were many twists and turns in the planning, financing, and designing of the city’s first street-level, purpose-built department store of the century.

“Whenever there was a fork in the road, we turned right,” said Clark, doubling down on their initial vision. Clark oversaw the 900-person team that designed the building and everything in it, from the specialty glass curtain walls to the exclusive collaborations with Nike and Christian Louboutin.

The search began in earnest in September 2009, said JLL’s Trulson, and they looked at over 30 sites before finalizing a deal with Extell in 2012. Some of the other sites they considered were Hudson Yards, where Nieman Marcus opened its first New York flagship in March, and the site of Bloomberg’s headquarters on Lexington Avenue.

While the Extell site was up for consideration, Barnett was still finalizing some of the acquisitions in the assemblage, and was undecided as to whether he wanted to build as-of-right or enter the city’s public review process. “Gary was a bit of a wildcard,” said Trulson. “We just never thought Gary would get to a place where we had a certain deal.”

At that point, Nordstrom was seriously considering Hudson Yards, and according to Trulson, the Nordstroms gave Barnett one last chance to come out to Seattle and show the deal was viable.

“In the early conversations, all of it was very uncertain, but when it became clear [Gary] would commit, we jumped all over it,” he said.

According to the finalized terms of the deal, Nordstrom bought the base of the building, which extends seven stories above ground and two below it, and would pay its $426 million price in installments, as construction milestones were met. That in turn helped Barnett with the first piece of the financing puzzle that would get his condo tower built.

Shortly after that, Blake decided to lease the corner buildings, at 1776 and 1790 Broadway, which were once occupied by Renault and the U.S. Rubber Company. To lease the buildings, the Nordstroms had to oust the existing tenants, an HSBC bank branch and Pax Deli, and agreed to restore the neo-gothic facades of both.

The middle building, a 12-story property at 1780 Broadway, built by the B.F. Goodrich tire company for its showroom and offices, was already part of the Extell site. He had attempted to buy the corner buildings too but the families who owned them were not willing to sell.

At another point, the entire tower had to be reengineered to move the elevator banks, which Extell’s engineers had designed to run through the center of the store. That would have negated one of the main advantages of choosing a new development site, said Clark, which offered them the option of large, open floor plates.

According to Clark, Barnett told her, “‘You don’t understand how tower structural engineering works.’”

“‘And you don’t understand what a Nordstrom store is,’” she retorted.

In the end it worked out for everyone, Clark said. Because of the change, Extell moved his building further east, which ended up providing better views for the residents, while further dividing the retail and residential elements of the building into two distinct structures.

The open floor plan was crucial to the design, Clark said. Unlike their previous flagships, where designers each have their own walled zones, the new store is divided only by floor-to-ceiling curtains made of reflective chain-mail, which welcomes consumers to explore and flow through the space. The same chain-mail curtains veil the glass curtain walls along the front wall. “It’s so reflective, you can project images on it,” Clark said.

That’s one of the many features of the design that cater to the modern shopper. The store also includes many areas to congregate or lounge, seven different food options, and alcohol can be served anywhere in the store. There is a bar in the shoe section, and a second bar with a half-level floor that overlooks Broadway. The two floors of the 1790 Broadway section are filled entirely with beauty products and services, while the opposite corner has two pop-up stores, one from Nike and one from Burberry, which will rotate new designers and concepts every few months.

In addition to store design, other ways that Nordstrom is evolving to meet the shopper of today is the inclusion of direct to consumer brands, like Everlane and Allbirds, in their store, and a strong emphasis on personalization and services, with the retailer already lauded and well-known for its stellar customer service.

In addition, Nordstrom has been testing out its inventory-less store concept, called Nordstrom Local, in both Los Angeles in New York. They have locations on the Upper East Side and in the West Village, where consumers can pick up online deliveries and order alterations.

Ariel Schuster, a retail broker with Newmark Knight Frank, said he’s optimistic Nordstrom can appeal to New Yorkers even though the age of department stores has generally passed. Outside of New York, there is a lot of brand affinity for Nordstrom, and since so many New Yorkers grew up elsewhere, there’s bound to be a lot of people familiar with it, he said.

The store’s location, near both Billionaire’s Row, Columbus Circle and the Upper West Side, provides it with a good mix of local, tourist and foot traffic. “It’s much more similar to Bergdorf [Goodman] in terms of location than Neiman [Marcus],” Schuster said. “Hudson Yards is a new city. New Yorkers and tourists have to find it. Columbus Circle is already in everyone’s minds, it’s part of the known grid in New York.”