A new 21-story tech hub called Zero Irving is springing up on the site of the old Union Square P.C. Richards — and it could signal a new game for tech in a city where it’s ready to break loose. 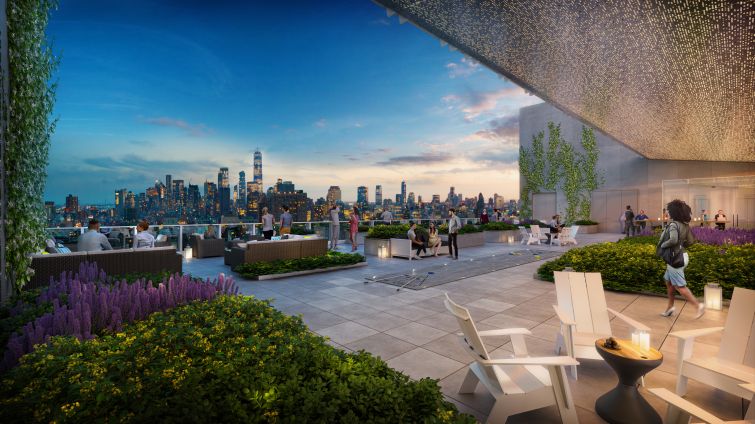 In April, after years of planning, navigating the city’s long rezoning process and dealing with pushback from some community groups, RAL Development Services finalized its deal with the city to build a 21-story tech hub on the site of a former P.C. Richard & Son building in Union Square.

The project at 124 East 14th Street, recently dubbed Zero Irving because of its proximity to Irving Place, aims to combine a technology training center and startup incubator with traditional office space all under one roof, said Joshua Wein, the financial director of RAL.

“The whole idea behind this building is everything was supposed to be synergistic in different uses of the building,” Wein said, “where we see graduates of this digital skills training center getting jobs and being an employee pipeline for some of those companies upstairs.”

RAL partnered with nonprofit Civic Hall to run a training center on the third through fifth floors, with plans to license out that space to organizations like Per Scholas, which runs tuition-free technology classes, and dedicated the sixth and seventh floor as an incubator. The top 14 floors of the new building — which should finish laying its foundation next month and open in 2020 — will be leased to market-rate office tenants, with a particular focus on technology companies.

While Zero Irving’s addition of a training center makes it unique, the New York City Economic Development Corporation has opened or invested in several technology hubs in the past decade to help grow the city’s burgeoning tech market.

“Tech hubs, in various forms, are critical pieces of the innovation ecosystem,” Ana Ariño, the chief strategy officer for the EDC, said, adding the hubs offer startups flexible office space, expensive equipment to prototype projects and access to regional and international partnerships. “These offerings are what makes these physical places the place where the community wants to go, particularly in a city of the scale of New York City. The startup community is essentially a network and it thrives when the ecosystem is strong.”

Founders of startup companies have a rough road ahead of them when launching (an estimate of 90 percent fail) but incubators can make it easier by providing everything from office space to connecting them to venture capitalists for funding, according to Shaun Stewart, the CEO of the New Lab tech hub that opened in the Brooklyn Navy Yard in 2016.

“Starting a company, you have to be in a suspension of belief, it is crazy to build a company,” he said. “We’ve built a support system … that will ensure a greater likelihood of success.”

The 84,000-square-foot New Lab focuses on startups focused on developing cutting-edge frontier tech — like Honeybee Robotics, which built parts used on NASA’s Mars rovers — and a hub like it is especially important because it provides nearly $6 million in equipment for prototype development along with a campus filled with experts in many similar fields.

In that time, a total number of 70,500 tech jobs were added, putting New York City behind San Francisco as the largest market in the country, the report found. While San Francisco still has 74,880 more people in the labor pool, the tide has begun to shift to the East Coast in recent years as more workers want to get out of Silicon Valley — and its traffic jams — to move to New York City, said Stewart.

“People used to suffer through that kind of quality of life,” he said. “You don’t have to anymore. You can have the quality of life of Brooklyn and partner and work with large, interesting corporations.”

The EDC first stepped in to create tech hubs around the city in 2014 when it teamed up with New York University to open a 10,000-square-foot business incubator, the Urban Future Lab, at 15 MetroTech in Downtown Brooklyn. It agreed to provide up to $750,000 in seed funding over two years for it, as Commercial Observer previously reported.

Ariño said the incubator proved to be successful but created problems for some companies that moved out, who then had to deal with navigating the city’s office environment; some ditched the city altogether.

The hubs also make it easier for companies to keep skilled employees, which is something Stewart wish existed when he opened Expedia’s East Coast office in Jersey City, N.J., in 2002.

“We didn’t have any community of support or anyone we knew who was working on similar projects, it was very hard to attract talent,” he said. “Communities like ours changed that significantly. If you’re a five-person startup now you can have an incredible home in Brooklyn.”

The EDC partnered with companies to open hubs including Grand Central Tech in Midtown, New Lab and Zero Irving. More recently, the EDC offered $90 million in tax subsidies for Deerfield Management Company for its $635 million biotech campus at 345 Park Avenue South and started a $100 million partnership with JVP and SOSA to spur the cybersecurity industry in the city, including a 50,000-square-foot investment hub at 426 Broadway, Crain’s New York Business reported.

“There’s an insatiable demand for cybersecurity jobs,” Ariño said. “We want to make a big investment to turbocharge the next generation of cyber talent in the city.”

And some of the EDC’s early incubators have said they experienced huge success. Stewart said the 137 companies to come out of New Lab have had above-average valuations and exits, including Jump Bikes which Uber bought for $200 million last year.

“What they didn’t need was a traditional accelerator or incubator,” said Matt Harrigan, a co-founder of Grand Central Tech. “If you’re a repeat founder, they’re just teaching you stuff you already know.

Milstein and Grand Central Tech (rebranded as Company) is planning to spend $150 million to renovate the entire 1.1-million-square-foot property into a tech campus. The building will have 250,000 square feet dedicated to startups — and 90 percent of that is already filled — with 700,000-square-feet set aside for larger companies, Harrigan said. Facebook nabbed a full, 40,000-square-foot floor at 335 Madison Avenue in December 2018, returning to the building after it left in 2014.

“Grand Central Tech is actually a bigger notion than just a technology accelerator,” Harrigan said. “It’s a thesis for how you can fill an entire large-format Midtown building.”

Company will offer startups flexible deals for office suites that give them the ability to grow their company easily without long-term leases weighing them down, Harrigan said.

“We really can take companies and move them through the funnel of growth,” he said.

Both Harrigan and New Labs’ Stewart said it’s important to not just choose any startup and throw them together but to curate them with tenants that can benefit each other.

“I think for a period there was this notion of, let’s create a tech hub! And many were created,” Harrigan said. “I think at this point more nuanced and more niche approaches are necessary.”

Ariño said the city has invested in several other hubs around the city and plans on adding more in the future. And some people want other boroughs aside for Manhattan and Brooklyn to benefit as well.

Emil Skandul, the founder of digital innovation firm Capitol Foundry, wrote an op-ed in the New York Daily News after the news of Zero Irving’s deal-closing calling for similar campuses to be built in Queens, Staten Island and the Bronx, which would make it easier for residents of those boroughs to benefit from them.

“I don’t want it to just be Manhattan,” Skandul told CO. “I think as time progresses we’re going to start to realize as automation takes its toll on the city’s workforce we need to upskill and retool the workforce.”

“Queens resembles the diversity of Silicon Valley,” Skandul added. “Queens can be this next tech hub.”

For Zero Irving, the developers said its Manhattan location will help preexisting training programs who couldn’t afford to be in the borough reach even more people because of its central location.

“These organizations really can’t do it in the center of Manhattan,” RAL’s Levine said. “Union Square, really being the hub of Manhattan, was a great place to be able to create this kind of facility that could leverage its location and have [organizations] only commit to the time they need for their curriculum.”

Zero Irving stemmed from a request for proposals the EDC released in 2016 to create a job creation hub in the area. RAL eventually won the bid and signed a 99-year ground lease with the EDC in April.

The deal called for RAL to pay $5 million to the EDC upfront and was granted three years of free rent, which switches to $2.3 million annually in the first five years. RAL’s plan from the beginning always called for market rent tenants up above to pay for the training center and incubator below, so it didn’t have to rely on any more city help.

“We’re not asking the city for any subsidies here,” Wein said. “We presented a program that is completely self-sufficient where the building itself can provide all these different benefits to the city as well as providing this great 21st century traditional office space.”