Five Reasons to Get Excited About Stamford

Good credit, budding retail and pile drivers galore are making the third biggest city in the Constitution State a draw for development 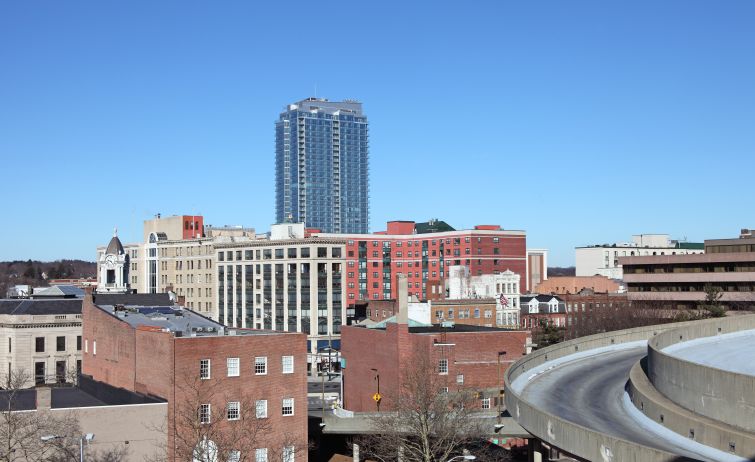 With a growing number of millennials fleeing big metropolises in favor of smaller, less dense and less expensive cities, Stamford, Connecticut, has become a ripe target to support them — not to mention for increased commercial property investment.

The city’s downtown has been bolstered by a bevy of new and planned multifamily projects, which will, in turn, draw increased retail leasing interest to support it. And while Stamford’s office sector has continued to labor under remarkably high vacancy rates — fluctuating around 25 percent — it’s still a destination given its relatively lower rents and proximity to New York (Grand Central is about an hour away on the Metro-North train). It’s home to headquarters for major companies like NBC Sports Group, World Wrestling Entertainment (WWE), Charter Communications and ITV.

Brokers and real estate professionals covering Fairfield County who spoke to Commercial Observer said that the city’s expanding population and positive fundamentals are priming it for long-term growth in the commercial property sector.

Below are five things to know about what’s happening with the commercial real estate scene in Stamford.

1. The multifamily sector in the city’s downtown is heating up to support what developers see as a wave of aging millennial residents that will eventually want to call the city home.

Stamford, particularly its downtown, is experiencing a rush of new multifamily investment — to the tune of a few thousand units — and development that aims to leverage the growing popularity of its once deflated central business district.

Just south of downtown, RXR Realty, with the Cappelli Organization, is working on the second phase of its 25-story, luxury mixed-use project, Atlantic Station, at 355 and 405 Atlantic Street.

Last month RXR got a $97.5 million construction loan from Bank OZK to fund the second phase, which will include 325 luxury units, 48,000 square feet of retail and a 534-space parking garage. The project’s first phase, which finished in January 2018 and later got a $103 million permanent loan from ULLICO in October 2018, included 325 rental units, just under 16,000 square feet of retail space and 321 parking spaces. RXR has already pre-leased all of the project’s retail space to child development center The Learning Experience, collaborative workspace Work Well Win and doggy day care center Dogtopia.

“The amount of institutional money that is flowing in on the residential side is very significant,” said RIPCO retail broker Jeffrey Nable, adding that he represents a variety of tenants such as boutique fitness operators as well as food tenants like Chopt and Tacombi, who are looking to increase their presences in Stamford: “There are a lot of good things happening on the retail side. There are certain pockets where there are no vacancies at all; that’s the High Ridge Road corridor … As downtown continues to coalesce around these new apartment units and build critical mass, that will become more viable for this type of retail or daily needs retail.”

With these and many other developments in and around downtown — including Building and Land Technology’s expansive mixed-use project called Harbor Point, south of downtown on the Long Island Sound — the University of Connecticut’s Stamford campus has also created its first dormitory, a new 116-unit property at 900 Washington Boulevard built by RMS Companies, which it opened in 2017.

2. WWE will take over an iconic former UBS building.

Stamford was once home to the world’s largest stock-trading floor, housed within a massive 700,000-square-foot complex at 677 Washington Boulevard. It opened in 1998 as UBS’ regional headquarters, feeding off the era’s Wall Street trading frenzy.

The former trading floor sits within a seven-story pavilion and is bigger than a football field. Next to it is a 13-story office tower. In 2016, having shut down its trading practices in Stamford, UBS moved to a smaller building across the street at 600 Washington Boulevard.

The property was at the center of a high-profile commercial mortgage-backed securities workout which, in mid-2017, resulted in a loss topping $100 million to the LBUBS 2004-C1 deal. The note was sold out of the trust with AVG Partners eventually taking ownership of the property.

A longtime Stamford staple, World Wrestling Entertainment has signed up for over 400,000 square feet at the location, consolidating its Stamford workforce, with plans to occupy four floors in the office tower and use the entire pavilion for production operations starting in 2021. WWE will look to sell its former headquarters at 1241 East Main Street and vacate leased offices at 1266 East Main Street.

“We’ve been looking for a new economic base for Stamford, and now it’s starting to come into focus,” Joe McGee, the vice president of public policy for The Business Council of Fairfield County, told the Stamford Advocate. “To keep WWE, a very sophisticated media company, here in Stamford is significant.”

Early last year, George Comfort & Sons, together with AVG, took over management and leasing of the property. George Comfort is an experienced Stamford operator in charge of a few office complexes in the city, including Shippan Landing and High Ridge Park.

3. Shifts in Stamford’s office market — and in nearby markets — has brought a more diverse tenant roster (and employer base).

Stamford has long played second fiddle to the financial powerhouses of New York and Boston. But its makeup is changing.

“Connecticut is in the midst of attracting and diversifying their employer base to ensure its attracting more TAMI [technology, advertising, media and information] companies, which is a great driver,” said Cushman & Wakefield senior managing director of its tri-state business, Jim Fagan. “It was office markets that formed Fairfield and Westchester Counties to begin with; it was companies wanting to come out of the bigger cities to give employees a better lifestyle.”

Stamford’s corporate concentration is substantial. It’s played host to headquarters for UBS and the Royal Bank of Scotland, and its attractiveness and proximity to New York has served as a bridge to surrounding areas like Westport and Greenwich, where companies like Bridgewater Associates and AQR Capital Management — two of the world’s largest hedge funds — and also alternative real estate lenders like LoanCore Capital and Knighthead Funding are situated.

Downtown, telecommunications behemoth Charter Communications will eventually move into a new two-building, 777,000-square-foot development that’s being built at 406 Washington Boulevard by Stamford-based Building and Land Technology. Charter has indicated that its 1,300 workers could more than double to 3,000 once the new $400 million project is completed.

Last year, ITV America, a reality TV goliath, relocated a significant portion of its operations to Stamford’s South End area at 860 Canal Street. They’ll host production and post-production activities as well as finance and accounting staffers at the site.

Biotech company SEMA4 has taken two locations in the city; in 2017, Henkel moved its consumer-goods headquarters from Arizona to a downtown office at 200 Elm Street, marking the city’s largest corporate addition that year.

The 760,000-square-foot regional mall asset — at 100 Greyrock Place — sits on 10 acres in downtown Stamford, which is a designated opportunity zone, and is being marketed as a potential mixed-use redevelopment opportunity as the area is zoned for a variety of uses, including residential, office, hospitality and light industrial.

5. The state’s credit rating has rebounded, signaling that its finances are stabilizing and it’s ready for more public investment.

A run of fiscal problems led to a downgrade of the state’s credit quality, making public spending more difficult. As these issues have been resolved, the backdrop is improving for the state to approve spending that will make private real estate investment more attractive.

From 2016 to 2018, Connecticut’s general obligation bond ratings were downgraded six times, according to Connecticut’s Finances, an organization dedicated to examining Connecticut’s fiscal and economic health.The organization highlighted that Moody’s Investors Service, Fitch Ratings and Standard & Poor’s (S&P) each downgraded the state’s bond ratings in May 2017, attributing the decision to “eroding state income tax receipts, the impending depletion of the state budget reserve, and huge unfunded liabilities expected to drive public-sector retirement benefit costs up for the next 15 to 20 years.”

But earlier this year, S&P upgraded the state’s bond prospects from stable to positive, and in July, Kroll Bond Rating Agency upgraded its outlook on the state’s general obligation bonds from negative to stable, as the Hartford Courant reported. More positive sentiment from a credit rating perspective means it’s more likely that borrowing for capital projects will become cheaper and more feasible.

Connecticut Treasurer Shawn Wooden told the Hartford Courant in a statement, “The financial sector is paying attention to the positive changes happening in Connecticut … And while there’s more work to do in addressing our long-standing economic challenges, [this] promising credit outlook underscores that we are moving in the right direction.”