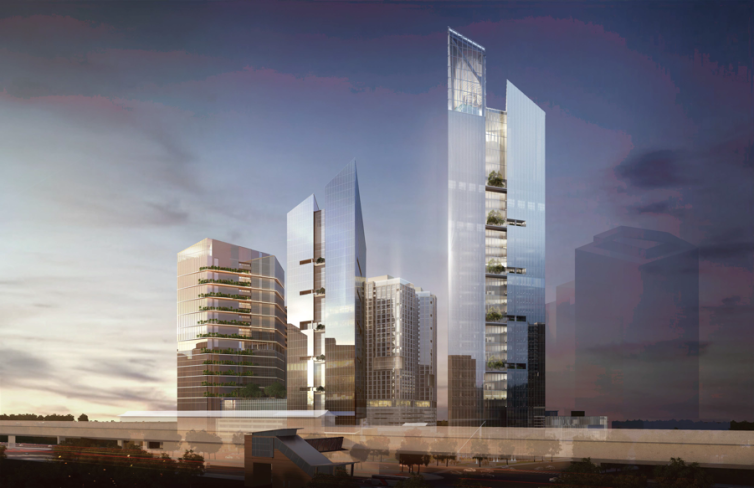 The Iconic at The View at Tysons rendering Clemente Development Company

Clemente Development Company has been granted permission by the Fairfax County Board of Supervisors to develop The Iconic, a 600-foot tower in Tysons, Va., that would eclipse the 555-foot Washington Monument as the highest structure in the greater Washington, D.C. area, according to the developers.

Additionally, the building, which will be located at 1575 Spring Hill Road, will be the tallest of any currently standing between Philadelphia and Charlotte, N.C., and take the top spot in Tysons from the 31-story, 470-foot Capital One headquarters, which opened in 2018 and is now the region’s tallest commercial property.

The Iconic will be designed by Gensler and boast nearly 1 million square feet over 30 stories, with a unique 200-foot architectural feature that will consist of a publicly accessible observation deck and botanical garden.

“We designed it to be iconic and a dramatic statement,” Julie Clemente, Clemente Development Company’s president, told Commercial Observer. “Every great city, we believe, has a great skyline. Having the tallest building between Philadelphia and North Carolina will really set an example.”

News of the development was first reported by CoStar.

The 873,830-square-foot building is just one part of the planned six-building, mixed-use development called The View at Tysons. “The next building over will be smaller, but basically mirror image,” Clemente said. The project will feature more than 3 million square feet of commercial space on 8.35 acres near the Spring Hill Metro station.

The development will also include a six-story, mixed-use building called The Landing, featuring two levels of retail, an outdoor third level and three stories of office.

“The View has been really carefully designed from the smallest building to the tallest building. We have office, hotel, residential and real estate, and that will activate a multi-level series of really beautifully designed parks on the ground level,” she said. “Gensler’s design will be sweeping buildings for a dramatic skyline that will set a new standard for Class A development in Northern Virginia.”

Clemente Development Company originally purchased one of the site parcels in 2017 and assimilated the rest of the parcels over the course of the last five years. Clemente expects to break ground on Phase 1 of The View in the next six to nine months.