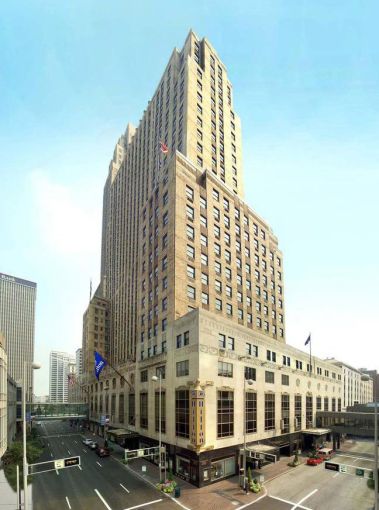 “This five-year loan allowed the borrower to finalize their ongoing property improvement plan and ideally position the hotel over the next five years,” Anderman said in prepared remarks. “With interest rates at historic lows, we were able to take out the existing bridge financing and lock-in a competitive loan that provides cash flow stability for the foreseeable future.”

The 31-story Hilton Cincinnati Netherland Plaza — at 35 West Fifth Street in Downtown Cincinnati — is a luxury hotel that was designated as a National Historic Landmark in 1985; it was added as a charter member of Historic Hotels of America in 1989. The hotel is one section of a massive three-part mixed-use development called Carew Tower in the city’s Central Business District.

The Hilton Cincinnati features 41,000 square feet of event space, two restaurants and a bar. It has the Orchids at Palm Court, which is Ohio’s only AAA Five Diamond restaurant, The Grille at Palm Court and The Bar at Palm Court.

Carew Tower, overall, was built in 1930, becoming the city’s largest skyscraper. It includes three components: the hotel, a 49-story, 400,000-square-foot office building and “the arcade,” which features 110,000 square feet of retail space, according to Cincinnati Business Courier.

The new CMBS loan, as well as the previous bridge financing that’s being taken out, went toward the hotel, alone.

Known for its French Art Deco design, the landmark hotel opened in 1931, a year after the tower’s construction, and its design has served as inspiration for the Empire State Building. The hotel also plays host to the popular Hall of Mirrors, a ballroom that was modeled after the Palace of Versailles located outside of Paris. Many popular political figures and celebrities visited the hotel throughout the 20th century, including Winston Churchill, Eleanor Roosevelt and Elvis Presley.

Early last year, Belvedere — purchased by its current CEO Greg Power in the fall 2014, with its most significant holding being Carew Tower — finished planned renovations to the hotel’s common areas, and by August 2018, the hotel had moved to invest over $2 million to revamp and upgrade its rooms, according to an Aug. 2018 report by the Business Courier.

“Placing the mortgage on the hotel is a significant step towards making certain that the hotel is carrying its own weight and in fact is doing so at this time,” Power told the Business Courier in an email statement in August 2018, following the firm securing the previous bridge debt. “We are now turning our attention to further strengthening the other two lines of business.”

According to the Business Courier’s 2018 report, Power has added a roster of fresh retail tenants to the Carew Tower development, including Paragon Salon, a diner and eatery called Frisch’s, a Stafford Jewelers, a Kidd Coffee Co. and a Hellman’s Clothiers.