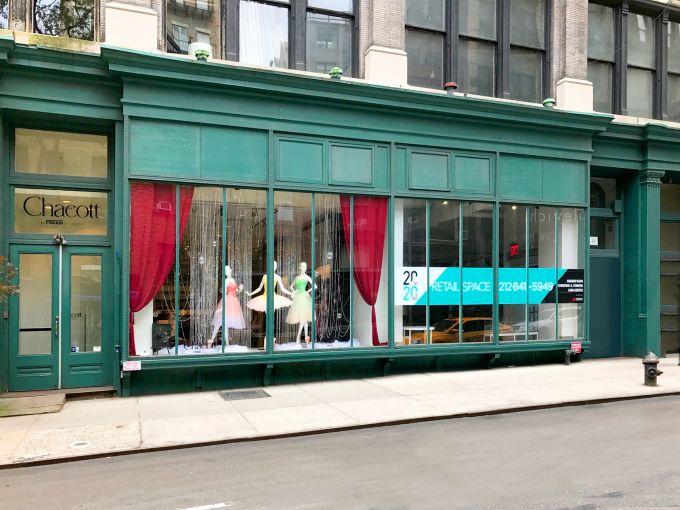 20 East 20th Street when it was occupied by Chacott, a ballet shoe and apparel store. Photo: CoStar Group

A bridal boutique that specializes in bridesmaids dresses is doubling its presence in the Flatiron District and taking over an adjacent retail space to roll out its new bride-focused concept, Brideside Bride.

Brideside inked a five-year sublease for 3,500 square feet of retail and office space at 20 East 20th Street, next to its current 3,300-square-foot showroom for bridesmaid dresses, according to co-founder Nicole Staple.

The new 1,500-square-foot store will sell every sample gown in the store in sizes 0 to 30 and offer designer dresses from Jenny by Jenny Yoo, Nouvelle Amsale, and Allure Romance as well as lower-priced garments from Brideside’s in-house labels. The remaining 2,000 square feet in the lease will be devoted to offices for the 22-person company, split between the basement and ground floor of the building between Broadway and Park Avenue South.

Its original storefront, Brideside Bridesmaid, opened ten months ago with the aim of giving bridal parties “a more concierge approach to a very outdated industry,” said Staple. The company originally launched as an online, direct-to-consumer bridesmaid dress retailer in 2014. At the time, the Observer dubbed the company “Warby Parker for wedding dresses” because of its home try-on program.

Staple declined to comment on asking rent in the deal. The sublandlord, Freed USA (which operated ballet store Chacott in the space), was represented by Andrew Kahn and Christian Stanton of Cushman & Wakefield. Newmark Knight Frank’s Justin Fantasia and Carly Geller handled the transaction for Brideside. Spokespeople for both brokerages did not immediately return requests for comment.

Brideside Bride takes over a space previously occupied by Waterworks, a luxury bath and kitchen brand owned by Restoration Hardware. The new bridal boutique, which was designed with woman-focused creative agency Worn Creative, opens today. The brand has already opened a bridal dress store in Chicago and has plans to open one in Boston as well. These will join its original bridesmaid dress stores in Boston, Chicago and Charlotte.

“At Brideside, we have always believed that the conventional wedding attire options did not reflect the individualism and confidence in women like us,” Staple said in a statement. “We observed an industry that designed and delivered dresses in a staid manner, emphasizing outdated traditions over inventing new experiences. We designed Brideside Bride to awaken the joy in this very meaningful life moment, guiding women through a beautiful journey that reflects her tastes and desires, while infusing pops of delight along the way.”