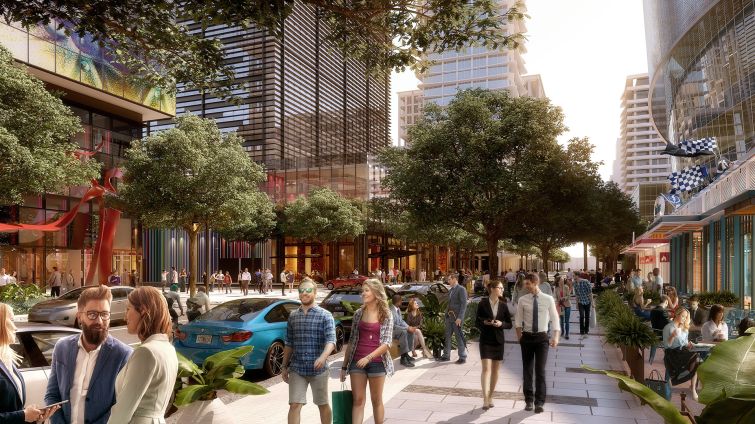 Bank OZK has lent $664 million to fund the construction of buildings that will be part of the Water Street Tampa mixed-use project in Tampa, Fla., including one of its centerpieces, an office building at 1001 Water Street.

The deal closed late last month and was revealed in a Hillsborough County public filing earlier in October, the Tampa Bay Business Journal reported. The CookFox Architects-designed 1001 Water will host 380,000 feet of office space and retail when it’s finished two years from now, and is one of three office towers that will anchor an ongoing $3 billion commercial project.

Strategic Property Partners (SPP), a development firm founded by Jeff Vinik — the owner of the Tampa Bay Lightning hockey team — and Cascade Investment — Bill Gates’ private investment fund — is backing the tower, which will be “the first new trophy office tower in Tampa in decades,” as per James Nozar, SPP’s CEO.

“SPP is taking advantage of favorable debt capital markets and the immense interest in Water Street Tampa,” a spokeswoman from SPP said in an email.

George Gleason, Bank OZK’s chairman and CEO, said in a statement to Commercial Observer that the development’s location, scope and sponsorship made a good fit with the bank’s criteria.

“Water Street is a visionary, mixed-use development … [and] embodies the high standards that Bank OZK consistently seeks in its project financings — marquee real estate, strong market fundamentals and top-tier sponsorship,” Gleason said. “We appreciate the opportunity to participate in the Water Street project as the sole senior secured lender.”

Gleason also spoke about the loan on a conference call with analysts on Friday to mark the release of the bank’s third-quarter earnings figures.

The loan “meets all of our standards for a really large credit,” Gleason said on the call. “It is an incredibly exciting and … well-executed project, based on what we’ve seen.”

Accounting and consulting firm RSM has pre-leased a floor of office space in the forthcoming tower, as per the Tampa Bay Times. As of the summer, a pair of additional companies was in discussions to lease five additional floors between the two of them.

SPP has already opened the first phase of the $3 billion Water Street project: a recreational space and outdoor food hall, called Sparkman Wharf, that has been up and running since late last year. When the first phase of the redeveloped neighborhood — which sits just east of the Lightning’s home, Amalie Arena — is finished in 2021, it will include 1.1 million square feet of office space, 300,000 square feet of retail, 1,300 apartments and Tampa’s first JW Marriott hotel.

The loan is a typically large construction deal for the Arkansas bank, whose shares climbed 2.15 percent today after reporting Thursday evening that third-quarter earnings per share had fallen two pennies short of analysts’ expectations. Investors may have been encouraged by a year-on-year rise in real estate lending, which rose to $6.68 billion from $6.49 billion during the same period in 2018.

Shortly after SPP broke ground on the project earlier this year, a team of archeologists was called to the scene as excavators began to discover gravesites, primitive toys and other artifacts of the past while they prepared the plot for the skyscraper’s foundations, the Tampa Bay Times reported.

Correction: This article has been updated to note that the construction loan also funds other aspects of the Water Street Tampa project in addition to 1001 Water Street.