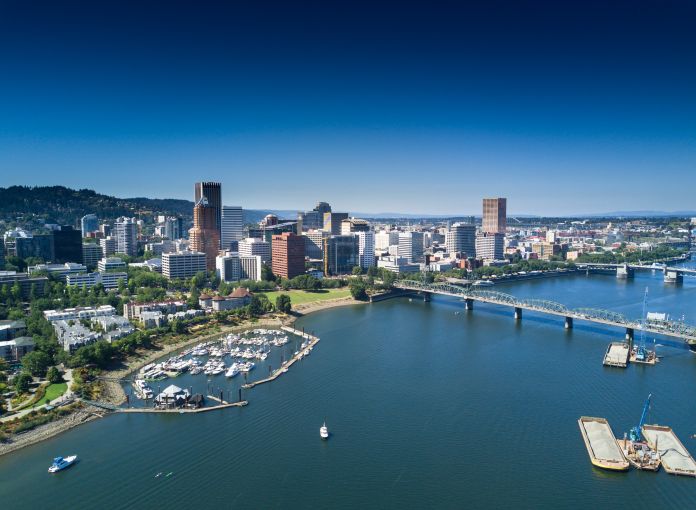 The 10-and-a-half-year, fixed-rate loan funds Prospect Ridge‘s acquisition of 250 Taylor Street, a soon-to-be-completed 10-story office tower in the growing city’s central business district. The building was developed by a partnership between Rockwood Capital and local development firms Arthur Mutal and Onder Development, who sold the property to Prospect Ridge in advance of its completion.

Plans for the building were approved in late 2016 by the city’s design commission and construction began shortly thereafter; the building won’t be open for business for several months to come. That would usually make a property an unlikely candidate for permanent financing. But 250 Taylor’s fortunes were boosted by a major tenant signing the building has already pulled off: In 2017, a major Pacific Northwest natural-gas utility, NW Natural, agreed to lease the entirety of 250 Taylor’s 181,000 square feet of office space. The company will move in when the building is completed, leaving its current headquarters in Portland’s Old Town neighborhood at 220 NW 2nd Avenue.

Kyle Jeffers, who leads West Coast originations for ACORE, said that despite rapid development of Portland’s office market, 250 Taylor will nonetheless make a niche for itself as a top-tier new-construction headquarters building.

“You’re seeing some new supply from office conversions [in Portland], but this is a little different in that it’s a brand new, Class A-plus building,” Jeffers said.

And there’s demand to go around, he added, from companies drawn to the City of Roses by both its economics and demographics.

“I think Portland is an interesting market,” Jeffers said. “Seattle and San Francisco are very tech heavy, but rents have become very high. You look at Portland as a place where you can get a more economical rent and that also has a highly skilled workforce.”

Prospect Ridge, which has offices in New York City and San Francisco, did not immediately respond to an inquiry.

The deal also signposts a new appetite for long-term, fixed-rate lending for ACORE, which, as with many of the most prominent new debt funds formed in the last decade, has made a name for itself as a provider of transitional, floating-rate bridge and construction debt.

Warren de Haan, one of the firm’s founding partners, said that ACORE has now lined up $2 billion to dedicate to long-term, fixed-rate debt. It’s a steeply competitive corner of the market, where big banks, insurance companies and CMBS lenders all vie to fund properties. But ACORE can win on execution timing, de Haan said, citing 250 Taylor as a case in point: A CMBS lender typically wouldn’t have signed up to back a building that’s not yet fully developed.

“To the extent there are still [tenant improvements] or capital-expenditure work such that the loan does not qualify for CMBS, we are able to do a 10-year, fixed-rate loan and accommodate some flexibility. ”

“To the extent you do a CMBS loan, there’s little to no flexibility from the servicers on modifications or adjustments,” de Haan said. “Over a 10-year period, things usually don’t go the way we think we’re going to go.”

That, of course, cuts both ways — ACORE, too, is signing up for the long run. Citing his and his partners’ industry experience, de Haan sounded undeterred.

“As a team, we’ve done in excess of $50 billion of 10-year fixed-rate lending,” de Haan said. “We believe we can handle all the embedded risk.”