With PLG, the Moinian Group Makes a Grand Entrance Into the Brooklyn Market 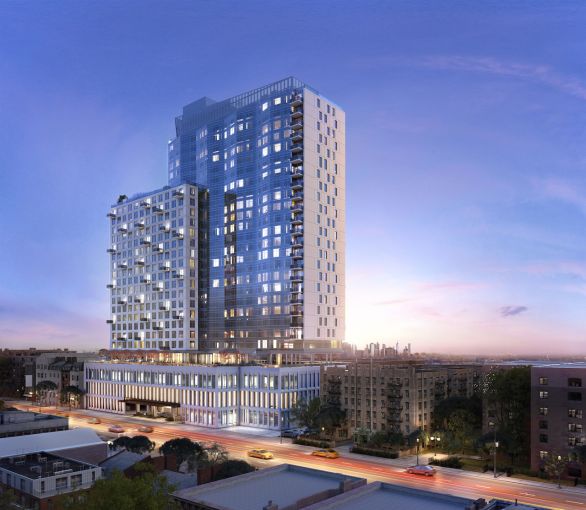 The recent opening of PLG, the luxury apartment building at 123 Linden Boulevard in Prospect Lefferts Gardens, marks a significant milestone for Moinian Capital Partners and its parent company, The Moinian Group.

The Moinian Group is one of the largest privately held real estate groups in the U.S., with a portfolio of over 20 million square feet. PLG marks the company’s first project in Brooklyn, as well as the first development project they’re also executed from the lending side. Leasing at PLG begins this month and move-ins are anticipated to begin later in the fall.

“The Moinian Group was looking at opportunities for expansion in Brooklyn, and this opportunity was presented to us by Bushburg Properties,” said Michael Zarifpoor, vice president of Moinian Capital Partners, which has placed almost $800 million into the market since its 2017 inception. Bushburg Properties is Moinian’s co-developer on the PLG project.

“On the lending side,” Zarifpoor continued, “PLG was the sort of project we had a lot of experience and a proven, successful track record with — a luxury, ground-up new development. Between Bushburg’s distinguished history in Brooklyn and the factors involved in 123 Linden, this was a safe and appropriate opportunity for us.”

PLG is a 467-unit, 26-story, 318-foot-tall luxury residential rental property with skyline views of Manhattan and the Verrazzano Bridge, as well as over 50,000 square feet of amenities. The project, which topped out this past April, was financed by Moinian Capital Partners, which provided Bushburg with a $160 million construction loan. PLG is Bushburg’s largest project to date.

The PLG project is especially meaningful for Moinian as it represents a significant advancement for Moinian Capital Partners: lending for the first time on a Moinian Group development project.

“It’s exciting that we were able to leverage our successful track record to optimize performance of the project, and also have more day-to-day oversight of the project’s status and deliverables,” said Mitchell Moinian, principal at Moinian. “The construction loan is at the tail end as we just launched leasing and anticipate first TCO this fall.”

“The nature of this deal, and our involvement in it, is something we are trying to replicate moving forward as a core product offering for Moinian Capital Partners,” he added.

The Moinian Group, which has a 50 percent equity stake in PLG, played a major role in strategic planning during construction, and will manage the property moving forward. Moinian sees PLG as the perfect introduction for the company into the Brooklyn market.

“PLG represented a great way for us to penetrate Brooklyn with the type of product offering we have a lot of experience with, considering its size and the nature of the offering, including some of the best amenities on the market,” said Joe Moinian, founder and CEO of The Moinian Group. “PLG allowed us to build a beautiful building with all the offerings of our Manhattan projects in Brooklyn. We also found the height factor of the building, with lower buildings surrounding it, very favorable, so that we could offer 360-degree sweeping views of New York from midtown to the Verrazzano.”

“This was an interesting opportunity for us to continue our relationship with Hill West Architects, as they were also the architects of record for Sky [Moinian’s 71-story tower, the country’s largest single-tower residential development, at 605 West 42nd Street], and are working on another project for us in the pipeline,” said Moinian. “We wanted something for PLG that was both contemporary and timeless, which is why you will notice a duality theme throughout the building — a portion of it is glass, but another portion is pre-cast concrete, which pays homage to the understated prewar aesthetic of the neighborhood.”

Hill West and Whitehall have bestowed PLG with a unique grandeur, from the lustrous stone and metal details in the building’s lobby to the minimalist design of the apartments, which bloom with natural light. The building’s amenities include an indoor swimming pool with a steam room, sauna, and an outdoor rooftop pool, a massive, state-of-the-art indoor gym and an outdoor fitness area, a dog run, an open-air lounge that encompasses the width of the building, a half-court basketball court, a covered motor court, and on-site parking.

“This is one of the strongest amenity offerings in New York, especially in Brooklyn,” said Jacob Entel, Director of Residential Properties for The Moinian Group. “For almost every amenity in the building, we have both an indoor and outdoor component.”

The Moinian Group’s Brooklyn expansion follows a major push that greatly impacted the footprint of Manhattan’s rapidly developing west side. Recent Moinian projects have included the two million square foot mixed-use 3 Hudson Boulevard; the Sky project, which includes 1,175 luxury rental units and 70,000 square feet of amenities; and the Oskar and Atelier developments. All of these projects combined total over 4 million square feet of luxury property along Manhattan’s far west side.

Now, with the Bushburg collaboration for PLG at 123 Linden Blvd., Moinian hopes to begin having the same kind of impact on the borough of Kings that they’ve had in Manhattan.

“The partnership between Moinian and Bushburg is the perfect partnership due to our comparative advantages,” said Moinian. “We were able to leverage our track record of development with Bushburg’s knowledge and expertise of the Brooklyn market to develop one of the most desirable rental buildings in New York.”