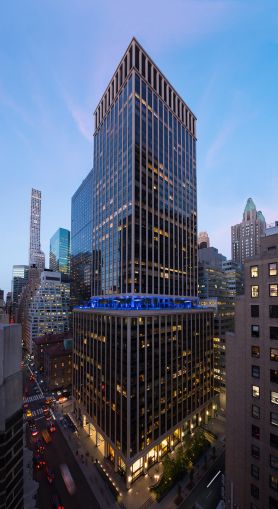 WeWork may have lost Adam Neumann, but apparently, not his appetite for Manhattan real estate.

After what was possibly the world’s worst week for WeWork, the newly headless company closed on a 362,197-square-foot lease at 437 Madison Avenue in the Plaza District.

The coworking giant will occupy floors two through 12, plus a portion of the 14th floor, at the 40-story, 850,000-square-foot building, located between East 49th and East 50th Streets. It will replace Omnicom, whose lease expires in 2020.

The deal, which would have been in negotiation for months, comes just after WeWork reportedly announced an end to all new leasing in order to cut losses, according to the Financial Times.

The deal gives WeWork its own entrance along East 50th Street, and its own space at the base of the building, as well as a private terrace on the 15th floor.

The lease comes following a $60 million repositioning of the 850,000-square-foot building, which included a redesigned lobby, upgraded mechanical systems and a landscaped outdoor terrace.

Other tenants at the building include Munich American Reassurance Company, Citizens Bank, and Carnegie Corporation of New York.

WeWork will take over the space in 2021. If the world as we know it still exists by then.