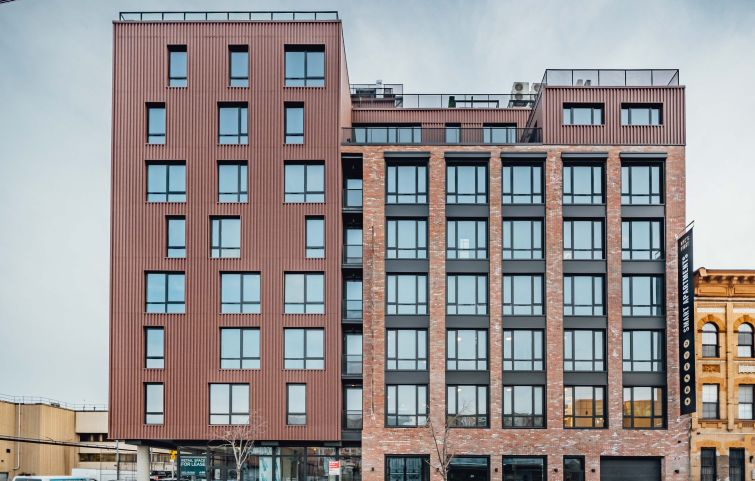 Developer JCS Realty has found a $63 million refinancing for its new rental building in Bushwick, as per records filed with the New York City Department of Finance.

The new debt, from CCRE, builds on and replaces a $49 million financing round from Manhattan’s S3 Capital, which provided funds for the Bushwick building, The Stanwix, during its construction. CCRE’s debt refinances the construction loan and adds $14 million in additional leverage.

A CCRE lending executive declined to comment on the financing.

JCS, led by Jacob Schwimmer, paid $23.4 million to buy the development site, at 115 Stanwix Street at the corner of Flushing Avenue, from Rabsky Group in the summer of 2017, The Real Deal reported at the time. The plot was chopped off of All Year Management and Rabsky’s large Rheingold Brewery site, where the developer is at work replacing a former beer production facility with several new rental buildings.

JCS bills The Stanwix as New York City’s “first smart apartment building.” Apartment comes with web-enabled lights, door locks and built-in speakers, and each kitchen comes with an Amazon Echo, Amazon‘s smart speaker device. The building also has a lounge, a co-working space and a playroom for children.

Designed by ND Architecture and Design, the fully leased eight-story building has 130 apartments, 41 of which were set aside for winners of an affordable-housing lottery. Open to residents and households earning between $49,000 and $157,000 per year, affordable-rent residents pay between $1,400 and $3,300 for one- to three-bedroom units in the building. Market-rate rents, in recent months, have ranged from $2,400 for a studio apartment to $3,940 for a three-bedroom unit.

Bushwick is by far New York City’s fastest-growing apartments market in 2019, slated to add more than 1,100 apartments by year’s end. The second-fastest area of the city, Jamaica, is growing by only half that tally.

The Rheingold projects are a significant contributor to that tally, and in June, All Year, led by Yoel Goldman, surmounted a significant hurdle when it pulled in a $235 million permanent loan from J.P. Morgan Chase and Mack Real Estate Group on one of the site’s largest rental projects, 123 Melrose Street, as reported by TRD.

Representatives for JCS Realty did not immediately respond to comments about the new Stanwix financing.